Notes: More Rivalries, yay! A little introspection at the end of the day, and another confrontation with the principal. One more post after this with Charlie, and then we might...SWITCH POVS!
Title: Rivalries: Chapter Three, Part One
*** 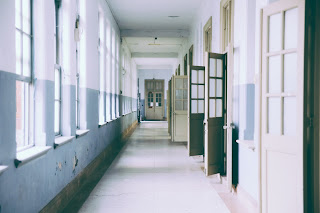 The final bell rang, the seniors left, and Charlie finally let himself heave the huge sigh of relief that had been building in his chest all afternoon. God damn, but he’d faced down panels of military brass that weren’t as intimidating as a group of high schoolers who were too self-assured to know what they didn’t know. Fuck, had he been as bad when he was in high school? He didn’t think so…then again, he’d had such a chip on his shoulder that he’d almost killed another student by being an uncontrolled idiot. He was lucky he’d still been accepted into the military after that.

Whatever had happened to Johnny Gibilisco? He’d only seen the other boy once after their duel—in the hospital, when Charlie went to visit him right after graduation. Their meeting had been stunted, filled with hurt and shame and overseen by both of their guardians, which had added an extra level of “ugh, why?” to the whole thing. Johnny had, technically, forgiven Charlie—or at least, he’d said “Forget it,” which to a teenage boy desperate for absolution was the same thing. But Charlie had never bothered to follow up, never looked to see what had become of Johnny, whether he’d ever figured out his knack…

Charlie wasn’t going to try now either, ease of searching for people via social media and freedom to communicate be damned. If he started looking back at his past, he might fall into a black hole and never claw his way free again. It had been hard enough the first time to get over the urge to feel like all his best moments were behind him, and the only life he had to look forward to now was a lesser one, a shriveled reflection of what he could have had. Jeanine, his therapist, had set him right on that front, at least.

“You’re here,” she’d said simply, during a particularly voluble session. “You’re not the same, but you’re still here. And some of your friends, soldiers-in-arms, people you loved and trusted—they’re not. It’s hard not to wish for things to be different. I can’t tell you not to do that, or that you’ll ever stop doing it. But I can tell you that you’re here, in the world, and you still have a chance to make a difference in it. It won’t be the same kind of difference you made before, but you can do it. I think no one on your team would begrudge you that.”

And fuck her for coming out and saying it, but she’d been right. That session was the start of Charlie getting his head on straight—dedicating more effort to his PT, listening to the shield specialists as they’d talked about retraining even when it became apparent that he wasn’t going to be able to do it, getting in touch with Julianna and Sergeant Myers and Ari…

Speaking of Ari, they were supposed to Skype tonight. And Charlie still had to get to the clinic, and make dinner, and plan out the next day’s lessons. He put his hand over his face for a moment and just breathed, taking in the smell of lemon-scented cleaner and, beneath that, the scent of his own sweat that all the bleach in the world couldn’t hide.

Charlie lifted his head quickly and looked at the door to the classroom. Principal Cross was there, her hands folded in front of her like a ship’s prow, her mouth pinched so tight the lines around it were practically ruched. “Yes?” he replied when she didn’t immediately speak.

“Are you quite all right?”

“Quite.” He kept it short—the last thing he wanted right now was to get into a discussion of the day with someone who was probably counting the hours until she could get rid of him. He stood up and began to pull his papers together. “I’ll be out of your hair shortly.”

Charlie faked a smile. It was the best he could do under the circumstances, and no matter who he flashed it at, they always seemed to see right through it. “Already? Class just ended a few minutes ago.”

“Class ended half an hour ago, Mr. Verlaine.”

Oh, shit. Time had gotten away from him. Fuck, fuck, fuck, it had been a while since he’d zoned out like that, lost in his own head. He thought he’d gotten over it. Better schedule an appointment with Jeanine. “What’s the consensus?” he asked, not bothering to meet her eyes as he continued to pack up. “Am I the worst teacher ever?”

“No.” She sounded somewhat disappointed by that, too. “The students by and large had positive things to say about their first class with you. Of course, it was only the first class, Mr. Verlaine. You have an entire semester stretching ahead of you. As…novel as you are to the children, it might be some time before the rose is off the bloom.”

“Well.” He snapped his case shut and made sure he wasn’t leaving anything behind. “I’ll be sure to put off inevitably disappointing them for as long as possible, Principal.”

“I won’t have you misleading them,” she cautioned, still blocking the door. “These are some of the best and brightest students in the entire country, each of them gifted with something many people would kill to have. They are to be celebrated, Mr. Verlaine, not frightened into submission about the potential futures their gifts might bring.”

Aha. Someone told her I’m being a bit of a hardass. “Having a knack is a thing to celebrate,” Charlie agreed. “But knacks aren’t purely positive, either. Everything comes with two sides, and I want to make sure these kids understand both perspectives instead of throwing a bunch of hopes and dreams at them and leaving them unprepared for the real world.”

“The real world will come at them quickly enough,” Principal Cross countered, something in her expression seeming almost troubled. “School is meant to be a safe place for every student, and Euryale Academy is uniquely suited to cater to the needs of these very special children. They should take comfort in this safety while it’s available to them. After they leave—”

“Do you have statistics on what happens to them after they leave?” Charlie interrupted, a little surprised he was bothering instead of letting her blather at him and blandly agreeing until she left. But this…this was important, this could be the difference between a student that excelled once they left here and a student that floundered under the weight of their own knack in the real world.

He pressed on. “Because I’d be really interested in seeing if feeding your students a load of fluff about how special they are instead of preparing them for the reality of being used—yes, used—” he emphasized when he saw her shake her head “—for the good of the country, whether that makes them more or less likely to succeed. I went to Stheno, you know, just down the road, and we didn’t have your facilities or connections, but we had a damn lot of students who knew the real score, and a high success rate in the field after graduation. How many of the students here freak out once they get to college, or wash out after they go into the military? How many of them end up in institutions, or under the care of other people with knacks, to keep them from doing the world at large harm? Because I bet it’s probably—”

“That’s enough, Mr. Verlaine.” Principal Cross had gone pale and stiff. “I think…I think you should leave now.” She put her money where her mouth was and turned around herself. He heard her clicking heels disappear down the hall, and wondered what kind of nerve he’d struck.

No time to pursue it—he was already running half an hour late. Charlie headed out the door, kicking it shut behind himself.

He’d dig deeper later. For now, he had a date with a physical therapist who wouldn’t take it easy on him just because he’d had a rough day at work. He hated it, but it was what he needed, and the army was paying for it, so…

Get a move on, Verlaine.

He glanced at his phone again and hustled to his car.