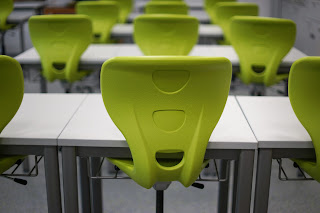 “Mr. Verlaine.” The principal, Georgia Cross, met him at the door to his new office with a neutral look and a prim, uncomfortable handshake. “Delighted you could make it. You were very nearly on time, too.”

“My first class isn’t until third period,” he pointed out.

“That’s hardly the point. You’re paid to be here for the entire day, not just when you’re working and not just when it suits you. Is that clear?”

“You will not ‘ma’am’ me,” she said, stepping back so he could get into the classroom. It was the first time he’d seen it in person, a room with twenty or so desks in it, a pretty decent audio-visual setup—and why wouldn’t it be, when at Euryale Academy the parents shelled out twenty-five grand a year for their kids to be educated—and a desk at the front that was clearly intended for a much smaller person. Charlie looked sidelong at the chair. He didn’t personally know Miss Wydell, the teacher he was replacing, but she couldn’t be more than five-foot-two.

“You will call me ‘Principal Cross’ or simply ‘Principal’ when you refer to me,” she continued. “I require the same from all my faculty and students. While we are a school with deep ties to the military community—” meaning that a disproportionate number of the Academy’s students were the children of high-ranking officers who worked in DC or Langley “—it is not something we advertise.”

No, only in your recruiting materials.

Principal Cross turned and looked at him. Her face was thin, and striking in its intensity, but there wasn’t a hint of friendliness to be found there. “The fact that you are retired military will not have an effect on your treatment at this Academy. You will be neither lionized nor censured for your service, is that clear? I don’t want your students developing some sort of ill-conceived notion of hero worship for you. You will not use these students as a means of bolstering your own self-image due to whatever your circumstances are.” Her look at his bare right side was pointed. “Is that understood?”

God, Charlie wished his hands—hand—was free so he could casually stick it in his pocket. Maybe roll back and forth on the balls of his feet, whistle a little tune. This woman was so sternly full of herself she didn’t realize how she came off. You’re like the worst, most ineffective kind of drill sergeant—the kind that will micromanage you to death but lead from behind if real trouble starts. “Understood, Principal,” he said instead.

“Good. You have your lesson plan. I suggest you stick to it.” She turned to leave.

“If you don’t mind my asking,” Charlie added as she walked away, “what’s your knack, Principal?”

She paused in the doorway, but only partially turned to face him. “I beg your pardon?”

“You’re the principal of one of the most prestigious magical academies on the east coast,” Charlie said easily. “I figured you had to have a knack to work here.”

Her back stiffened so much it was like she’d rammed a rod up the middle of her spine. “Don’t presume to cozen personal information out of me, Mr. Verlaine,” she snapped. “A knack is not required to work here, which is certainly fortunate for you, isn’t it?” She left without answering the question, and with a parting jab that shouldn’t have stung as much as it did.

Charlie heaved a sigh and put his briefcase on the desk. First order of business—adjust the seat. Second order of business—go over the lesson plans again. He was pretty sure he had them memorized at this point, but that was small comfort.

A little tinkering got the chair to where it needed to be. He opened up his briefcase and pulled out his tablet, opening it up to the plans. He’d have four classes to teach three times a week, between fifteen and twenty-two students in each. The in-class work wasn’t the bulk of his responsibilities, though—that was reserved for the training grounds. Still, better to start with the classes.

The freshmen group would be easy. Introduction to various schools of knacks—pure mental, pure physical, ornamental, elemental, and crossovers. A little history, but mostly exploration of what they could do. About one percent of the population of the United States was born with a knack, and only ten percent of that had one that was powerful enough to warrant training. That amounted to a little over three hundred thousand people who needed schooling in their gifts, which was for the most part taken care of privately. Public schools didn’t have the resources in place to effectively protect or handle the kids with knacks, and while they generally looked like normal, everyday children, some of their manifestations could be frightening. People who could afford it chose places like Euryale Academy, with conduits to prestigious universities, elite jobs, and political connections.

People who couldn’t afford Euryale went somewhere else with their kids. Somewhere like the place Charlie had gotten his high school education, Euryale’s impoverished sister school Stheno High, about twenty miles and a million bucks away from here. That was where the military really liked to have a presence—where the kids were too desperate for a future using their knacks to truly question how they got there.

Charlie shook his head and refocused. Sophomores got more basic info coupled with group activities for the different schools of knack. Juniors got more focused attention on where their knacks could be used in society, while seniors…shit, why did he have a senior class anyway? In a place like this, those kids would be very accustomed to their knacks by now—they’d have a clear path ahead of them, educationally. So what was he supposed to do with them three times a week?

One on one training. Well, that was something he could do, but the teaching suggestions were so boring. “Encourage ornamentalists to work on specific illusions! Allow mentalists to attempt various mental locks on each other—remember, dampening equipment at all times!” Ugh, dampening equipment—helmets and pads designed to reduce the effectiveness of knacks. It worked decently well for high school students, but by the time you got into the forces, you were trained to strike through dampening equipment. It was dangerous to get too reliant on it.

This would be so much fucking easier if Charlie’s own knack was working. He raised his left hand slowly, holding it out in half of the traditional shield triangle in front of him. He could feel the knack inside of him, its power pulsing like a busted electrical cable, sputtering and eventually flickering out when it got no release. It just didn’t work without the shield symbol, the physical funnel through which Charlie’s knack let go. It was how he’d trained from a young age, and while he knew that there were people changing the dynamic now, people who said the brain could learn to rechannel the knack if it was still plastic enough, his wasn’t. He was too old to learn a new way to channel his power, a new way to live.

You’re only twenty-nine, you jackass, a little voice in his head pointed out. He ignored it and kept going through the lesson plan.

After another hour and a half, his first class arrived. It was the freshmen, eighteen of them, fresh-faced and hesitant, and so fucking young Charlie almost felt his heart break just looking at them. As soon as the bell rang, he started out at their apprehensive faces and made a decision. He got out from behind his desk and sat on the front of it, so that they could clearly see him—all of him, there and not.

A few kids murmured uncertainly, and one kid’s jaw dropped. “Welcome to the knack class,” Charlie said conversationally. “I’m Mr. Verlaine, I’ll be your teacher until Miss Wydell comes back. I know a lot of you probably already understand your knacks pretty well. Some of you might not. That’s okay. No matter where you’re starting from, I’m here to help you figure this out. I’ve worked with people from all schools, and seen more crossovers than you can count. You can ask any question you want, and as long as it’s not privileged information, I’ll do my best to answer it. Okay?” Eighteen heads nodded. “Great. Now…” He looked down at his tablet. “Roll call.”