Notes: It's my birthday, yaaaay! Have some story to celebrate with me :)
Title: Rivalries: Chapter Two, Part One
*** 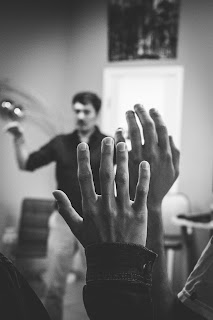 The sophomores were almost as easy as the freshmen—not as innocent, but not as tutored in using their knacks yet either. There were the standouts among the class of twenty-one, but none of them were approaching mastery yet. The closest were the pair of twin crossovers, ornamentalists to the outside world and mentalists with each other. They’d been practicing together for years, and could talk to each other psychically. They were smug about their powers as only prodigies could be.

“We’ve been good at this for ages, Mr. Verlaine,” the one with the shorter hair—Sophia—said, glancing slyly in her sister’s direction.

“Really good,” her twin, Grace, said. A second later their images wavered, then reformed. Each girl was sitting in the other’s seat now. Grace tossed her long brown hair over her shoulder and grinned as the rest of the class snickered. Apparently this wasn’t a new trick.

Wait until the military gets ahold of you. There’s no way you’re headed anywhere else with knacks like that. Charlie could already see it in his head—they’d be incredible assets, but also incredible risks. What if one could feel the other’s pain under extreme conditions? They’d have to learn to put up barriers, and it would be excruciating, and when they finally learned what “alone” was for the first time one of both of them might have a mental breakdown.

He’d seen it before, in some young recruits who’d come on at the same time he had. They’d both washed out, their knacks fundamentally damaged after intense training. He hadn’t kept up with them. He hadn’t wanted to—it would have been too depressing. The rate of suicide among those with damaged knacks was high, and the highest percentage of people with damaged knacks came from the military. People like him.

The tittering was dying away into an uncomfortable silence. Charlie forced a smile. “That’s quite good. Can you do it while running?”

Sophie frowned. “Why would we need to do that?”

Charlie bit his tongue against the truth. “It’s always a good idea to push what you can do,” he replied. “Even if you’re out of breath, even if you’re tired, you want to be able to use your knack convincingly. Any other ornamentalists in the room?” Three other kids raised their hands, two boys and another girl. “Great. Can any of you cast an illusion while running?”

“I can,” one of the boys replied. He had hair that was just millimeters away from being a buzzcut, and the squared shoulders of a child who’d been called to attention more than he’d been hugged. “Not really elaborate ones, just, trees and stuff, but my dad makes me work on it.”

This kid almost certainly had a military father. “You’ll be a good help on that subject then,” Charlie said, and the kid beamed. “All right, where are my elementals?”

The kids were more than happy to show off their skills, and by the end of class Charlie felt like he was getting a handle on what they could all do. He took a break for lunch—brought from home, a peanut butter and jelly sandwich with a side of tabbouleh—then met with the juniors.

The juniors were next-level serious, facing the crushing pressure of a year that could make or break them educationally while also trying to refine their knacks to a point where they could say they had general mastery. There were twenty of them, and they ran the gamut from stone-faced to jittery to overly ingratiating and bubbly. Charlie knew nerves when he saw them in action, and these kids were nervous.

“What about the standard tests for knack knowledge and practical workmanship?” one of the kids, a girl with short brown and blue hair in the very front row asked as soon as he opened things up to questions. “Can you teach to the test?”

“I could,” which was slightly a lie, because he hadn’t gone over the test material yet, but he could get those resources at any time, “but that would be a mistake.”

“It’s never a mistake to teach to the test!” the girl replied, aghast at the very suggestion. “How else are we supposed to get top grades on it? If I don’t get rated ‘Exceptional’ with my knack, I won’t make it into the university I need to graduate from!”

Charlie pushed aside everything that was wrong with that sentence in his mind—and there was a lot to unpack there—and checked his attendance sheet one more time. “Dahlia Moore, right? Mental knack?”

Oh, damn. “What are the top five professions for someone with a persuasive knack?”

“Politics, sales and marketing, healthcare, media and communications, and influencer.”

Charlie shook his head. “Wrong. Those are professions that benefit from having a persuasive knack, but your ability to use it is rigidly circumscribed by law. You’re not allowed to make people do things that they don’t want to do, in general society. That includes influencing voters, forcing them to take certain pills, getting them to sign contracts that are injurious to their personal finances…”

Dahlia looked offended. “I would never do any of that!”

“It’s easy to think that now, but the truth is, people with knacks like yours in visible professions are never trusted. You’d either have to keep your knack a secret, which is illegal, or go to work in an invisible profession. Do you see what I’m getting at?”

“But…I don’t…” She bit her lip and looked down.

“You want to excel,” Charlie said gently. He looked around the room. “All of you want to excel with your knacks. You want to be the best, and that’s a great goal. But you need to think long and hard on precisely what aspect of your knack you want to be the best at. Persuasive knacks can get good work in the government, but if you’re not careful you’ll be pulled straight into black ops. Do some research on it and get back to me, okay? We’ll look at refining your goals for your knack, and what you need to do to accomplish them. That goes for all of you,” he added. “If you have your future planned out and know exactly what you want to do, that’s great. Just make sure that your skills support your goals.”

“What if our knack is useless?” a boy in the back spoke up, sounding bored.

“Like mine. I always know how to find up and down.”

Huh. Charlie had never heard of a knack quite like that. There had to be more to it. “When you say up and down…”

“Up.” The kid pointed at the ceiling. “Down.” He pointed at the floor. “When they tested me as a kid they had me do it dizzy, in midair, underwater…I can always tell up and down.”

“You might make a great rescue diver with a knack like that,” Charlie offered. “Especially in caves and caverns. Or if your knack is somehow gravity-centric, I wonder what it would do in space? How’s your math?”

“Good,” the kid said, sitting up a little.

“You might be able to do some really cool experiments on the space station with a knack like yours,” Charlie said, warming to the idea. “Like, fundamentals of physics cool.”

Another boy raised his hand. “What about me! My knack is physical, I can lift five times my body weight, but I don’t want to go into search and rescue because I’m afraid of tight spaces.”

“There are so many other great options for strength knacks,” Charlie assured him. “Let’s see…”

The hour he spent with the juniors was the most interesting and active yet. By the time the final class of the day rolled around, Charlie was feeling pretty good about his first day.

Then he met the seniors.