Notes: And we're back! Not the longest one, but it sets up a real doozy next week. We're almost in space! 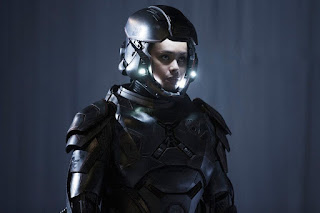 A night’s rest did the phage wonders, and by the next morning Cas felt secure beneath his brother’s face again. He’d done away with the evidence of his splicing, and his wounds—small as they were—were better but deliberately not healed, so the Imperians wouldn’t have any reason to worry.

Best of all, no one had come running in and demanding answers about the state he’d left the barracks in. The low buzz of machinery in motion all around him indicated that the Imperians were breaking camp. If he was lucky, they wouldn’t have time to completely catalog the damages he’d caused, and would pack things away and forget about their provenance.

He’d opted to wait in Rone’s bedroom for the man himself to come and get him, but once it was light out and Rone still hadn’t come, Cas decided to go looking for him. He stepped out of the soft, dim chamber and into the main room of the tent. The desk was bare, completely powered down, and most of the furnishings were gone. Huh. Rone had been busy while Cas was napping.

He wasn’t here now, though, and Cas was getting hungry. He needed to find his husband, have something to eat, and figure out the next step to his plan, not necessarily in that order. He took a deep breath and checked that his face was in place one last time, then stepped outside the tent.

The air smelled fresh, like a rainstorm had just passed, leaving rare and lovely sunlight behind. Cas looked around, startled a little when he glanced left, then sighed. For all their training, for all their technology, these people still couldn’t conquer the tiniest but most important things.

He walked up to Private Fillie, who stood perfectly straight and upright in her power armor, and stared into her sleeping face. Good grief, she was actually snoring a little. What good was a suit of armor that let you sleep upright if it didn’t come with some sort of proximity alarm to wake you up when someone approached?

If Cas had been himself right now, he would have tipped her over backwards just to teach her a lesson. The suit might have gyroscopic stabilizers, but one good kick to the midsection and he bet he could take her down. Unfortunately, though, he was being Beren, and Beren would never do something like that. Not even to Cas when they were children, and Cas had done plenty to his brother to merit that kind of payback.

He sighed, then cleared his throat. Then cleared it again a little louder.

“Mmm…hmm…oh, oh shit!” Private Fillie went from a slow wakening to full-on shock in under a second. Cas heard the joints of her armor whine as they struggled to keep her upright. “Oh no, I’m so sorry! I was on guard duty, I didn’t mean to fall asleep!” She actually whimpered. “Commander Hije is going to kill me. I’ll never see the outside of a ship again.”

“It’s fine. I’m completely unharmed, see?” Cas gestured down at himself shyly. “Nothing got me, you did your job.”

Private Fillie wiped one of her gauntlets over her exposed face. “Thank the king and queen you’re all right, but I should have done better. We’re not the captain’s usual caliber of soldiers—he worked exclusively with a combat legion for decades, and it’s got to be such a comedown to get stuck with us. I mean, I’m actually a supply specialist, not a regular foot soldier! Shit.” She squeezed her eyes shut, then looked at him again. “Okay, I’m sorry. Let’s start over.”

“Sure.” Cas nodded, doing his best not to follow up on the details she’s just let drop—there would be time for that later—and affected a curious look. “Why are you in this armor anyway? You didn’t have it on yesterday.”

“Yesterday no one had been attacked inside our compound,” Fillie said with a sigh. “It’s a new order from the commander—everyone is to be in combat armor if they’re planetside.”

“Oh. Should I get some too, then?” That would actually be an interesting experience. Cas didn’t know what kind of sensors were in it, though—probably better to avoid it until he knew.

“Oh no,” Fillie replied, and he relaxed a little bit. “My orders were to wait for you to wake up, then to take you directly to Captain Basinti’s ship. We’re leaving Leelinge today—before sundown, if the captain has his way. He’s overseeing deconstruction of the base as we speak. I’m supposed to get you food and a fresh store of clothes, too, and set you up in his quarters. Does that sound all right?”

This girl was the oddest soldier Cas had ever met, supply specialist or not. “It sounds fine. Shouldn’t you be, um, ordering me? I mean, since they’re your orders too?”

“Not at all!” Fillie actually looked shocked. “You’re our captain’s husband! I can’t order you around except in life-threatening emergencies! None of us can except for the captain himself!”

That was strange. “But I’m a civilian, not part of the military hierarchy.”

“But you’re married to Rone Basinti,” Fillie whisper-hissed to him. “That means you’re part of the actual hierarchy. You outrank almost everyone in this unit.”

Uh-oh. Cas was running into something exclusively Imperian here, something he didn’t understand. Probably the best thing to do was be honest about it. “What actual hierarchy?”

Fillie brightened. “Oh, good, I can explain this! The captain told me to answer any questions you might have, and this one I can definitely do. Let’s get some breakfast for you in the mess while I explain, then I’ll take you on board and set you up with some learning modules to help straighten things out, okay?”

Learning modules. Hoo-boy. Here came the learning curve, staring Cas in the face and laughing all the way. He was about to be thrown into an environment he had almost no knowledge of, and it was going to be hell to keep up. He could do it, though. He didn’t have any other choice.

“That sounds great,” Cas said. “Also, when you’re getting me set up, do you think you could get me a list of the other Delacoeurians who made it off-planet? Or whatever the closest thing to that is?” he added when she looked dubious. “It’s just, I had a few friends that were going to try and leave before the last big battle, and I don’t know whether any of them survived or not.”

“Aw.” Fillie’s heart-shaped face softened from worry to compassion. “Sure, let me see what I can do.”

“Thank you so much.” His stomach growled, and both of them chuckled. “And breakfast would be fantastic.”

“You got it. I can explain about the aristocracy on the way!”

“Wonderful.” Cas mentally prepared himself to take notes. “Please do.”
Posted by Cari Z at 9:22 AM No comments:

Notes: We're having an excerpt blog post today instead of another chapter of Mutable because it's been quite busy chez moi, and I'd rather give you something complete than tap out something weird and call it good. This is the first chapter of a novella I was going to publish with Riptide, which--yeah, not happening now, but I love the story and am trying to figure out what to do with it. It's got monsters. And fortified cities. And people empathically connecting to dragons in order not to get eaten by everything else. Enjoy! 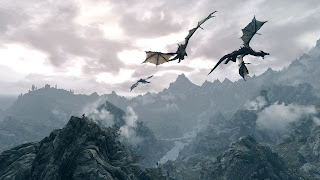 Yes, the picture is from Skyrim. But it sort of fits.