Notes: Action! Yaaaay! We'll be in space soon, but first--have a creepy weird night attack. You know you love it. 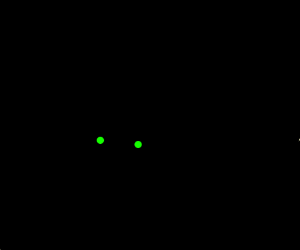 The Eaters came at midnight.

Midnight was almost pitch black on Leelange. Even if the sky hadn’t been perpetually shrouded in clouds, the planet’s dual moons were tiny, hardly bigger than the distant planets of the rest of the system. The light they gave off was faint and red, almost invisible in the thick blanket of the planet’s night. To compensate, Cas directed the phage to enhance his vision. It was one of the easiest modifications to make, which was good, because he was burning a lot of energy just maintaining his body heat squatting on top of the roof, waiting for the Eaters to come.

It would have been suicide to remain in the building. If Cas stayed in a place where the creatures could converge on him, box him in, he would be outflanked in a matter of seconds. Instead he left his decoy inside, hopefully small enough that it wouldn’t attract any unwanted attention, and perched on the roof with his weapons of war.

It had taken a little targeted destruction, but after an hour Cas had rerouted a hot water hose up top and turned the heat up to near-boiling, pulled free enough wiring to make a decent electro-net, and made himself a few close combat weapons. As long as they sent fewer than five, spaced out, he’d be fine. And why risk sending more? The Imperians were lazy, but they weren’t stupid. Too many disturbances in any one place and they’d know something was wrong. That was why he had to finish this fast.

Soft as a shadow, slick as a drop of rain, a slim dark shape slid over the edge of the wall twenty feet away. He watched it crawl along the ground, slow and searching. A scout. It sniffed, head moving rhythmically from side to side, then looked up. Virid green eyes met Cas’s, and a second later the thing was coming at him, up the side of the building as flicker-quick as a lightning moth.

The moment it crested the side, Cas flung the net and activated the charge. Wires wrapped around the scout, enveloping the little body. It flailed for a moment, ugly with convulsions, but didn’t scream. The Leelangers always made sure their assassins didn’t have voices to give them away. After a moment, it fell off the roof.

Maybe if it didn’t report back, the others would give up and—no, there was another. And another, this one bigger, more like a rock weasel, half the size of Cas’s torso and bearing three overlapping rows of serrated teeth. They moved faster, ignoring their writhing counterpart and climbing so fast that Cas barely had time to bring the hose to bear before the smaller one leapt for him.

It took a gush of steaming water to the face, straight into its open mouth. The heat seared the thing inside and out, and it fell with a hoarse sighing sound and didn’t move again. The bigger one, though, dodged just as Cas turned the spray on it. The water hit it in the side instead of the face—painful, but not debilitating. He kept the hose on it, but it just shut its eyes and charged, disregarding the water completely.

Fuck. Cas dropped the hose and freed the shivs he’d made out a piece of the shower he’d pulled apart. He jabbed with them, evading the eater’s open, hissing mouth and cutting low, toward the throat. A fang nicked his forearm—damn it, no, he couldn’t afford to have any marks that couldn’t be explained away. Cas kicked it hard in the chest, knocking it onto its back, dove forward into a roll right next to it and slid a shiv up and through its gullet before it could reorient itself. The gout of blood from the wound missed him, and as he got to his feet he felt a surge of accomplishment. If this was all they had, then he’d be okay.

This wasn’t all they had. Another one—no, two—no, four were coming over the wall now, and two Cas might have handled, but four on one was just too many. They really were pulling out all the stops to take him out.

Cas took a second to assess as he reached for the hose. He couldn’t manage this many on his own, not and keep himself uninjured. He needed to get backup, and he needed to make it look like he’d had nothing to do with this so far. Or as close as he could get.

Just as the first of the eaters crested the edge of the roof, Cas swung the hose around and sprayed it at the wall itself. Imperian building materials were smart enough to know when they were being compromised—sudden heat was a warning sign, and a moment later, a siren sounded. All four eaters stopped in their tracks, green eyes luminescent, and Cas took advantage of their confusion to leap from the back side of the roof onto the ground below.

He landed in a crouch, wincing a little at a tiny crunch in his ankle—it would swell some, but he could deal with that later. He let himself into the barracks, grabbed his decoy body and pressed it hard to his neck. Slowly, enough of a connection appeared reengage the sensor with his actual body. Now Rone would know that his heart was racing, among other things. So Cas just had to get to Rone, and he’d find some more protection.

Or he’d be leading a band of hungry eaters to attack his new husband in the middle of the night.

Cas hesitated, and that hesitation cost him. One of the eaters had gnawed its way through the weak point on the door—window frames, why did people reinforce the glass but not the frames—and leapt inside. Cas brandished his shivs but the eater ignored the threat, charging him.

Cas kicked the corner of the cot, putting it in the eater’s path and entangling its unusually long legs, then cut a slice out of the creature as he ran past. It snapped at him, barely missing his elbow, but Cas made it past it and outside, where—

Three more eaters waited for him, mouths open and eager, bodies low and ready to charge. Cas raised his shivs and prepared to cause a racket. If he could just hold out long enough to—

Blam! One of the eaters exploded in a burst of ichor. Blam-blam! The other two went the same way, barely having time to turn toward the new threat before it made them into little more than memories. Cas stared, astonished, at the figure coming toward him in the rain and the dark. Were those violet eyes glowing?

His distraction was deadly. The eater he’d left behind inside leapt through the window onto his upper back, driving him onto the ground. Cas bucked his hips in an effort to throw it off but it had its claws out now, digging painfully into his upper arms. Sharp teeth snapped right above the back of his neck, and even as he fought Cas thought, I’m sorry, Beren. I tried. I—

Blam! Disgustingly warm effluvia settled over him as the eater was blown apart. A moment later strong hands lifted Cas off the ground, holding him upright when it seemed like his knees might collapse.

“Beren!” It was Rone, his husband, his unexpected savior. And his violet eyes did glow. How… “Are you all right?”

Cas gathered himself together as best he could. “I’m—I think so, yes. Those things—I know what they are, they’re—”

“We can talk about it once we have you somewhere safe, and get you checked out by a medic.” More Imperian troops were arriving now, Darven among them. Rone’s second-in-command’s eyes were wide and astonished. And not, Cas noted, any brighter than normal.

“What the hell is happening? Sir?”

“Intruder alert,” Rone said. “Something got in over the walls, past our safeguards. I want lights on everything, active patrols for the rest of the night, an increase in perimeter sensitivity, and the head of the Leelanger government on my private line within the next five minutes. They’ve got some serious explaining to do.” He glanced down at what was left of the eaters. “Get the corpses to the medics as well. I want them quarantined until further notice.”

“And you.” Rone looked at Cas, who was trying desperately to keep his little brother’s face in place while keeping the phage from diverting to heal his fresh wounds. “You’re with me.”
Posted by Cari Z at 8:01 AM