Notes: A little more background for Charlie and a little info on the mysterious Ari. Next up? NEW POV TIME! Yes, this is a dual-POV piece, get ready to get rocked. Or confused, as the case may be.
Title: Rivalries: Chapter Three, Part Two
*** 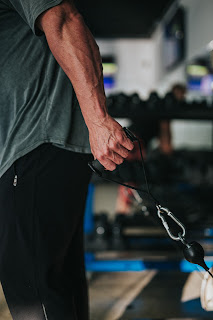 Charlie set the end of the band down with a huge sigh of relief. How, how was it possible that in almost thirty years of life, too much of it spent running his ass off in combat zones, that he’d never discovered all of the muscles that this guy knew about before? Like this one, somewhere in the middle of his back, that was burning like a motherfucker now but would leave him able to stand without feeling like his torso was imbalanced for the next week.

“Good job,” Lionel, his physical terrorist said, handing over a towel. “One more set and we’ll call it a day.”

“I hate you,” Charlie muttered, wiping the sweat from his forehead.

“Now see, if I was a less secure person I’d be worried about that. As it stands, I know I’m in your good graces, so buck up, buttercup, and give me twenty more.”

Charlie grimaced but grabbed the end of the band, turning into the exercise as he did so.

“Do you call…everyone ‘buttercup’…or is it…just me?” Charlie panted as he did the reps. Some of the other people in the rehab gym were staring in his direction. Whatever, let them get an eyeful. He wasn’t ashamed of his body—he did the best he could with it, and he knew it.

He was way more ashamed of his knack, but that was another thing altogether.

“I save it for the big tough guys who get wimpy around the fourth set, just like you,” Lionel replied. “Which means I pull it out a couple times a day.” He grinned. “What can I say, I get all the fun patients. Thirteen…fourteen…”

Charlie closed his eyes and gritted his teeth. “Seventeen…eighteen…” The last two reps were torture, and when he put the band down again, his whole back shivered with relief. It was like a wire had been cut in two, and he shivered and quaked a bit as his muscles slowly remembered normalcy.

“Lie down on the table, I’ll get you a hot pack,” Lionel said, pointing to the table normally used for prone exercises. They could have gotten a private therapy room for the heat treatment, there were plenty of them available, but Charlie preferred being out in the open. He could handle being in a small, confined space by himself, but when other people got in there with him, he started to feel unsettled.

Lionel came back with a fresh towel, which he laid down on Charlie’s back, then covered with the hot pack. Warmth soaked through the thin barrier into his skin, and deeper, and Charlie sighed as the twitches began to subside. “You seemed a little rougher than usual today,” Lionel noted as he sat down at the end of the table and began to fill out his notes. “Any idea why?”

Lionel’s pen stopped scratching. “Oh right, the teaching job! How was it?”

“Exhausting.” Understatement. “Kids are terrifying. Never have any.”

“Too late, I’ve already got three.” He sounded more amused than offended—it was one of the best things about him, that he tended to laugh instead of huff. He didn’t let patients treat him badly, but he understood bad days. Maybe because he was a veteran too, but probably just because he was had compassion. “And they’re great.”

Charlie opened his eyes and looked at the guy. “Yeah? All the time?”

“Nobody’s great all the time, but I don’t judge my kiddos solely on the messes they make.” Lionel made a few more notes. “Will you go back?”

“Yeah.” He had to. He needed the money…plus, he’d actually kind of enjoyed himself, in retrospect. Being in the academy made him feel like he was actually doing something with his life post-military, something worthwhile. He could help those kids. And if he managed to help them, then maybe he could figure out a way to help Ari too.

Speaking of Ari… “What time is it?”

Shit. He had half an hour before their Skype session. “I’ve gotta go.” He rolled over onto his side, sighing as the blissful heat fell away.

“You haven’t had that hot pack on long enough to do much good.”

“I’ll spend some time on my heating pad to make up for it,” Charlie said. Lionel looked doubtful. “Promise.”

“Pinkie swear?” Lionel grinned at whatever expression he saw on Charlie’s face. “All right, if you’re sure. See you next week, then. Be safe. Don’t let the kids get you down.”

“I won’t.” Charlie grabbed his button-down and coat and pulled them on, then booked it for his car. If the lights were on his side, he could be home in twenty minutes. That would leave him enough time to grab a quick bite, which—he should have packed a granola bar or something for after class, because he was starving.

The lights weren’t on his side. He got home with two minutes to spare, just enough time to fling himself down in front of his computer and get Skype running. Ari and his mom were already online. Of course.

They called a moment later. Charlie accepted the call, and smiled when he saw that Ari was leaning so far forward that a view of his nose filled almost the entire screen. “Hey, buddy.”

“Charlie! You’re here!” He leaned back against his mom, relief washing over his tense features. “I was worried something had happened to you.”

Charlie shook his head. “Nope. I’m right here, same as always. When do I miss our talks?”

“Never ever,” Huda, Ari’s mother, said, brushing a strand of hair back from her forehead with an elegant hand. She didn’t bother to look at Charlie, just kept her eyes on her child, like she could measure the level of pain he was in just by watching. Maybe she could, maybe parenthood came with its own set of knacks, but if it did, it wasn’t a knack that could end her child’s suffering. Unfortunately, for now, the only person who could do that was Charlie, just by showing up. It wasn’t a power he felt he deserved.

“Tell me about your day, buddy,” Charlie said, and Ari launched into a retelling of the day’s events—a trip to the library and the aquarium, then writing a report on manta rays. As he spoke, he relaxed more and more against his mother’s side, until finally he looked like any other kid. Once he did, Huda let herself relax too, and smiled at Charlie.

“Did you know that manta rays can jump way high out of the water?”

“It’s so cool, let me show you the video…” He shared his screen, and Charlie spent the next ten minutes watching a documentary on manta rays and listening to his stomach rumble.

Ari was yawning by the time the video ended. “I think you’re done here,” his mother said. “Go get ready for bed.”

“Go on. Say goodnight to Charlie.”

Charlie smiled for him. “Yeah, see you tomorrow.” Ari left, and Huda got up and shut the door, then came back to the camera.

“What a day,” she said, rubbing her fingertips across her forehead. She had a decade on Charlie, and had been a professional diplomat for twice as long as he’d been in the army. She knew how to hide her feelings. If she was letting them out now, it was either because she meant to or because she was exhausted.

“Not so bad for him today, he had fun. But I spent five hours arguing with the hospital, then with the school. He wants to go back to one, doesn’t want to go back to the other, and generally it’s just a mess.” She looked seriously at Charlie. “Do try to keep this job, all right? I went to a lot of trouble to arrange it for you, and you’ll need the credentials if Ari ends up needing to transition to one-on-one learning, which I hope he won’t, but…” She sighed. “I do hate having to rely on you so much.”

“Lord, don’t be sorry, you’re helping me keep him out of isolation and an eternity of tests as it is. And I’m so grateful for that.” She bit her lip. “But it isn’t fair. Not to you or to him.” Or me, her subtext read loud and clear.

“The docs will figure out his knack,” Charlie said, for probably the hundredth time. He was starting to lose faith, but he had to keep the form of it for Huda’s sake. “They’ll find a way to fix the problem.”

“We’ll see.” She smiled slightly, then reached for the screen. “Good night, Charlie. See you tomorrow.”

“Yeah, you bet.” The connection ended. Tomorrow. Another day of putting on a brave face, dealing with a principal who hates him, students who would test him to his limits, and another session with Ari.

Fuck it. Ari dealt with worse all the time, and he was eleven. Buck up, buttercup. Tomorrow’s a brand new day.