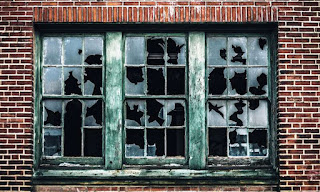 It would be cliché to say that the school felt kind of eerie, abandoned as it was in the middle of the day, but Johnny was just going to have to be cliché then, because eerie was the best word for it. It was completely wrong—these hallways should be teeming with kids, especially right now, during the lunch period. Stheno High was a fairly small high school, as these places went, with only a hundred (and two) students, but it had the acoustics to make a hundred kids sound more like a thousand.

Instead there was nothing but the sound of his own footsteps walking down the hall, and the groan of the ancient air conditioning as it fretfully got itself moving. The building itself didn’t seem to be falling apart anywhere significant—not yet—but there were fragments of concrete and broken glass all over the floor where windows had shattered. Broken pieces of ceiling tile clattered down here and there, and Johnny had to dodge more than once to get out of the way of a falling piece of plasterboard.

He was acutely aware of the fact that his clock was running down, and equally aware that the last thing he wanted to do was startle Roland into using his knack again, aggressively or defensively. What was the best way to approach this? Walk softly until he found him? It probably wouldn’t work—the school was too big to search on his own in under half an hour, and he didn’t want to startle Roland once he did find him. Would shouting and yelling be any better, though?

C’mon, c’mon… Johnny stopped, pressing a hand to his chest as his knack suddenly twisted inside of him, forcing itself into a new shape, an entirely new feeling. Well. That was unexpected, but very welcome. But what could he do now? He coughed self-consciously, then said “Roland.”

His throat practically vibrated with the power of his own speech, but the sound that came out of his mouth was no louder than his usual voice, not really. It just…it was everywhere. The word seemed to be in his ears, and in the corner, and down the hall all at the same time, all at the same volume. Wow. Speech-crafting. One of the rarer knacks, and not one that got a lot of notice in a time when martial knacks were given more attention, but right now Johnny was intensely grateful for it.

“Roland,” he tried again, stepping forward slowly. “It’s me, Mr. Gibilisco. I’m the only one here, I promise. No one else is coming in, not unless you want them to.” For now. “I’d really like to talk to you about what’s happening. I know you wouldn’t do this for no reason, Roland. You’ve got great control over your ability.”

As if to reprimand him, the school shuddered slightly. Of course, a slight shudder in a building translated to a large shudder in a single person standing in the middle of the hall, and Johnny had to pinwheel his arms to keep his balance. Okay, shit, new tactic. “I just want to talk, I promise. I won’t make you do anything you don’t want to,” he said, and some strange impulse moved him to add, “I won’t make you go anywhere you don’t want to either. Something like this, yes, there’ll be fallout, but we can figure it out together. I promise, I’m here for you, Roland.”

He sighed. “I’m sorry if I didn’t make that clear earlier. It’s a busy school, and I’m the only counselor here, but that’s no excuse for not making time for you if you felt like you needed my help. I’m available whenever you need me.”

“You weren’t here this morning.”

Where was that voice coming from? It was Roland’s for sure, surprisingly high for such a big kid, but of course he was scared right now. Of course he wasn’t speaking normally—he was probably terrified. “No, I wasn’t,” Johnny admitted, looking around the hallway. “I can’t control everything, unfortunately, and that includes my health.”

“I was getting a treatment.” I was being experimented on, but willingly. Johnny didn’t think he’d share the actual nuts and bolts of that statement, given how it could be misconstrued. “But I came back as soon as Principal Cochrane got in touch with me. Please, talk to me, Roland. Tell me what’s wrong.”

“No.” Johnny shook his head firmly, moving toward where he thought the voice was coming from—teacher’s lounge? Or the front office right next to it, maybe. “Not jail, you’re too young for that and you’ve got a knack, you don’t belong in a jail. You’ll probably have to go to juvenile detention while the judge works out what to do next, but I’m certain that you’ll be cleared to go back home as soon as—”

“I don’t want to go back home!” Roland shouted it, and the walls seemed to shout with him. Plaster fell away in huge hunks, and Johnny threw his hands over his head just in case something serious came down from the ceiling. After a moment, it stopped, and he cautiously lowered his arms.

“Why not?” he asked, sensing that they were getting to the real heart of the matter. “Why don’t you want to go back with the Pattersons?”

Nothing. Not even a tremor in the floor. Johnny took a few more steps toward the lounge. “Roland? Is something wrong with them?” He thought for a second, then tried again. “Is Colonel Patterson doing something to your knack?” Johnny didn’t know all that much about elemental knacks, but he knew Colonel Patterson’s was particularly strong. Was he using it to intimidate Roland?

The words came from Roland, stepping out of the busted doorframe leading to the teacher’s lounge. He was a big kid, already taller than Johnny and probably fifty pounds heavier, but he had his arms wrapped tight around his chest like he wanted to shrink himself right now. “It’s Mrs. Patterson,” he said miserably.

Mrs. Patterson. Linda. Another knack, mental, something about order, something about organization…foci! Being a foci was a very in-demand knack, one that could be used to help other people focus their minds on complicated tasks for long periods of time. Big pharmaceutical and tech companies employed foci almost exclusively, especially right before a new product or upgrade went out. “What is she doing to you?” Johnny asked, aching to go over to Roland but not wanting to spook him.

“She…she tells me I need to do better on my schoolwork, so every day when I get home, she sits me down at the table and I…I work. I focus and I focus, until it hurts, until my head hurts so much I can’t even see anymore, and she won’t give me any water until she thinks I’ve done enough, and sometimes I don’t even get to eat because she makes me keep working so much longer when the Colonel isn’t home, and he isn’t home a lot.” The words tumbled out of his mouth like falling rocks, each one breaking against the ground.

“It’s better when he’s home, he—she doesn’t do it around him, but I can’t tell him what she does because he won’t believe me, why would he believe me? She’s his wife, I’m just a dumb kid with a knack like his, and I was awake all last night and this morning and she didn’t give me anything to eat because she said I didn’t do well enough, and then I got here and—” His hands clenched, then began to visibly shake. “I hate it there,” he said, fury and fear welling in his voice. “I hate it, I hate her, and I won’t go back. Put me in juvie, or jail, or anywhere else, but I don’t want to stay with her anymore!”

Johnny finally broke his self-imposed distance and went over to Roland, putting an arm around his shoulder. “Okay,” he said, and Roland began to cry. “Okay, it’s okay. I’ll talk to CPS and you won’t go back there. All right? Promise,” he added, and Roland cried harder. Now that he was close, Johnny could see the fatigue in his face, the dark circles under his eyes and the tremble in his lips. “It’s going to be okay.”

Of course, the school won’t be okay, but we’ll cross that bridge when we come to it. “C’mon, let’s go outside, all right? We’ll get you something to eat and drink, and then you can sleep for a while.”

Johnny had the feeling that he himself wouldn’t be sleeping for a long time yet to come, but at least he’d get Roland out before SWAT got here. After that…

Well, he didn’t know what was going to happen, but he knew he’d be going in swinging.