Notes: This chapter has it all! Confrontations between old nemeses, unfortunate revelations that could tear our hero apart, and--social isolation! So pertinent ;) 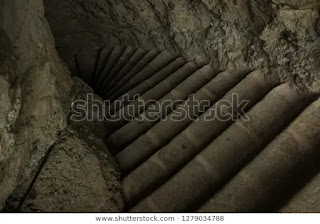 Dr. Wictoryn whirled around before Anton could say anything, one hand going to her hip. There was no weapon there at the moment, but that it was an automatic reflex told Anton that she was used to carrying a pistol. He took a moment to be grateful that she was unarmed. “You! What are you doing here?” she demanded, her voice gone shrill with tension. “This is a private treatment area! Get out immediately!”

Montgomery began to laugh. “Is that what you tell other people? Private ‘treatment,’ my dear doctor, oh, what fun you must have at confession. I daresay that cardinal of yours gives you light enough penances, considering his inclinations. He wasn’t nearly so gentle with me when he tried to take my confession, but…” He shrugged. “Perhaps that’s because I have nothing to confess.”

Anton finally managed to propel himself forward. “What in heaven’s name are you doing here?” he breathed, staring at his former acquaintance and nemesis with growing discomfort. “I thought you fled for one of the Baltic states.”

“I did, and well done you for being so up to date on the politics of rebellion,” Montgomery said, his grin a bit too sharp. Apart from needing a shave and having noticeably longer hair, he looked…well. There were no signs of abuse, or starvation. He was pale, but he was healthy. “I didn’t expect to be hunted down by an imperial wolf of unusual tenacity,” he went on. “The more fool me, I suppose. I should have spelled more of my guns.”

“Mr. Seiber, I must insist that you leave at once,” the doctor hissed. “It is entirely inappropriate for you to be down here right now.”

I’ll never get this chance again if I leave. Anton wasn’t even sure what kind of chance it was that he had, but he wasn’t going to give it up now. There was too much riding on getting an answer, and with the spell from the palimpsest up for grabs, he had to get an answer. “If you want me to leave, you will have to drag me,” he said flatly. “For now, I will stay and speak with Gerald.”

“I never thought I’d hear my name again from that sweet mouth of yours,” Montgomery said, his tone mocking but his eyes oddly intense. “Aren’t you supposed to be dead?”

“You should have stayed to make sure.”

Dr. Wictoryn looked between the two of them and cursed, then rushed past Anton out the door. Anton watched her go, then looked back to find Montgomery tapping the collar around his neck. “She doesn’t have to worry about me fleeing, or attacking you,” he said. “This keeps me from acting on my more pressing desires. Any hint of aggression and my reflexes go as slow as honey running uphill. It’s a brilliant bit of spellwork.”

It was, but Anton wasn’t interested in dissecting it right now. “Of the two of us, I’m more amazed that you’re alive,” he said, not bothering to soften the delivery. He loathed Gerald Montgomery, loathed him with a passion, but he was betting that the other man was more interested in talking right now than he was at taking offense. After all, he’d been down here for…it could have been months. Nearly a year, even. “How have you wrangled a continuance?”

“Would you believe it’s the benefit of my personality, my charm, my joie de vivre?” Montgomery asked, batting his eyelashes like a coquette. “I’m always the life of every party, Seiber.”

“And right now it’s a party of one,” Anton pointed out.

“On the contrary, you’re here! And I find myself desperate for news of you, so before you attempt to lambast me into answering your questions, let me make you a deal. It shall be an eye for an eye between us, a cut for a cut. One of yours answered for every one of mine.”

“You must be truly desperate for news if you’re coming to me for it,” Anton said, his heartrate quickening despite his reservations.

“Oh, I am indeed,” Montgomery murmured. “What do you say?”

“A devilishly clever man hunted me down and refused to take a bullet for an answer. How did you survive the fall from the tower?”

That was scarcely an answer from Gerald, but Anton would circle back. “I never fell in the first place. Did you work out the spell on the palimpsest?”

“I was rescued by a friend,” Anton replied, gathering his nerve. “Why can’t the thaumaturges of the Institute use the spell?”

Montgomery grinned. “Because it comes with a rather fiendish failsafe. How did you come to be here?”

“I came with Doctor Grable.”

“Ah, so the old man has returned.” Montgomery stroked his chin thoughtfully. “I thought they might bring him here to take his try. These fellows are brilliant at managing their spells, but they lack the cruel edge you really want in an interrogator. Grable might manage things better.”

“What is he meant to manage?” Anton shook his head. “I mean, what is the failsafe?”

Montgomery laughed. “Two questions, and I should answer neither of them since you’re breaking the rules, but this is the first fun I’ve had in ages, Seiber, so I’ll give you both of them. He’s meant to manage me, of course. I’ve been sabotaged, and not even I can tell exactly how, but damned if my keepers will believe that. And the failsafe? It’s brilliant, absolutely brilliant.” He bared his teeth again, but it wasn’t a grin this time. He was furious, it was written in every line of his body. “That targeting spell should have made my fortune. Instead, it ruined me. Casting the spell creates more than just a bullet that never misses its target, Seiber. It stitches a geas into the caster themselves. I could perform it a thousand times and never feel the effects, but to pass the spell itself on? It won’t allow it. Trying to do so damaged my mind.” He clenched his hands into fists. “I can’t cast a single spell anymore, I can’t even read them without becoming nauseous. I’ve lost my ability to be a thaumaturge, do you understand? It stripped me of everything.”

Oh God. No wonder Hrym couldn’t look at the whole spell—even if they had all the components, it would be too risky to his genius. They must have tried to get Montgomery to give it up, gotten the bit Anton had seen on Hrym’s wall, and then…it was gone.

“Gone,” Montgomery murmured, as though he’d read Anton’s mind. “All of it, gone. I’m useless now, a simpleton, normal like all the rest of those fools. Did you know this would happen to me, Seiber?” He stood up, taller than Anton by a good margin. “Did you know what that palimpsest would do to me? Because the only thing that’s given me a lick of decent sleep ever since I was captured was the thought of your pretty face smashed to bits against the cobblestones of the university, and yet here you are…whole.” His glare was so intense, Anton practically felt the flames it yearned to conjure on him.

“Do you know it?” he continued. “The spell? I hope so, Seiber, I dearly hope so. I would like nothing more than for them to try and pry it out of your head next, and for you to end up down here with me. Just the two of us, alone.” His hands clenched again. “I can’t leap at you, I can’t even walk up to you, but I bet I could crawl. Slow as honey, but I could do it, and one night when you’re asleep, I’ll crawl up beside you and bury your face in a pillow and hold it down with all my might until—”

“That’s enough from you,” a familiar voice said. Anton exhaled unsteadily—he hadn’t even realized he was holding his breath until Camille broke the spell that Montgomery’s voice wove around him.

Anton turned slowly to face Camille, but the lumière wasn’t looking at him. “Still alive, I see,” he said calmly.

“Despite your admonishments, I’ve no doubt.” Montgomery leered. “Is little Seiber yours, then? A fine choice—he’s so soft, yet so staunch. Did you save him from the end I tried to give him?”

“I’m afraid you’ll have to wonder a while longer.” He finally met Anton’s eyes. “We need to go. Immediately.” Doctor Wictoryn and two guards stood back by the door, the doctor staring daggers at Anton.

“No,” Anton said, surprising himself. “No, I want you to explain this, him.”

“Not right now.” Anton opened his mouth to protest, but Camille cut him off. “Your friend, Lady Cuthbert, has just been caught stealing privileged information from Lord Atwood’s laboratory. She’s under arrest.”
Posted by Cari Z at 11:27 AM