The Tank: Chapter Fourteen, Part One

Notes: If this chapter had a different title, it might be something like "new enemies and old friends." Hint enough for you? ;) 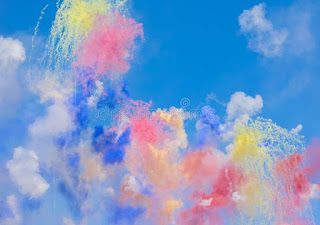 Anton was, quite frankly, expecting to confront something of a fuss when he emerged onto the lawn where the tanks were firing from. The new viscount had given every indication of being on the verge of attack if he didn’t get the tanks immediately, and Lord Jourdain hadn’t looked like he was in the mood to suffer being threatened. Would there be fighting amongst the guests and the guards, screaming matches over jurisdiction, threats of future violence promised if conditions weren’t immediately met?

Instead, Anton stepped out beneath a rainbow-colored sky and wondered if, between this and Hrym’s strangely beautiful laboratory, he’d somehow walked into a dream. The tanks were firing, but whatever it was they were shooting wasn’t shells. How could it be, he chided himself as he slowly crossed the lawn to stand beside Dr. Grable’s chair. He didn’t see Camille, or Caroline, oddly enough—but then she never cared much for loud noises, and this was about as loud as it could get without being in the middle of a genuine firefight. Dr. Wictoryn was also there, standing behind the wheelchair with her arms crossed, looking highly displeased.

“This display is hardly conducive to healing,” she shouted to Dr. Grable over the noise. “I must insist you return to the infirmary at once!”

“I will be damned to the far corner of hell before I enter that whitewashed prison again!” he shouted back, clearly enjoying himself.

“It has sound-dampening glyphs on it, you won’t hear a thing there!”

“You ignorant, foolhardy, reckless son of a—”

“I’ll bring him back inside as soon as possible,” Anton said, stepping in before the good doctor lost her voice screaming at his mentor. “It’s quite important that we witness this, however.”

“Oh, is it?” she said scathingly. “More important than delivering his pain medication on time in a safe and sterile environment?”

“I’m afraid it is. We’ll come along as soon as possible, though.”

She looked at him long and hard, then turned on her heel and stalked off, presumably to the nice, quiet infirmary where Anton would rather be himself, frankly.

“Well done, man,” Dr. Grable congratulated him. “You’ve a way of getting people to bend to your will that I simply don’t understand.”

“What do you think of all this?” he asked, pitching his voice low enough that it wouldn’t be heard by the other onlookers, not that that would be hard with all the noise. Cardinal Proulx and Monsieur Deschamps were both present, part of the larger group of the Viscount’s entourage and Lord Jourdain and his assistants. The tanks rolled back and forth on the grass twenty yards distant, pausing to adjust their guns and fire every twenty seconds or so, then rolling a bit farther before repeating the feat. For only three tanks, the cacophony was impressively regularly spaced.

“What are they firing?” Anton asked.

“It’s a display both of strength and of weakness. Strength because it validates what the tanks should be able to do, which is fling big projectiles long distances with accuracy. Weakness because those projectiles haven’t actually been developed yet.”

Wait a minute. “I thought they were just modified cannons.”

“Heavily modified. Solid shot won’t work, not if the tank wants to be able to maintain its momentum over any sort of challenging terrain—it’s just too heavy, and the engines aren’t good enough to get over that challenge yet. All the new ones being built will do better, but even there, the shells have to be custom. It hasn’t been a priority for the Institute.” Dr. Grable’s smile held a hint of satisfaction. “And I believe I see why, now.”

“Do you think Lord Jourdain saw this coming?”

“If not this, then something like it.” Dr. Grable settled back into his chair, completely unbothered by the booms overhead. It probably didn’t really compare to the clamor of war, but it was beginning to get to Anton—he flinched every time another blast went off. “Humanity is always looking for an edge in conflict. These tanks are an excellent start, but until they’re ready to be put into the emperor’s service, with trained troops to operate them and loyal commanders to lead those troops, they’re almost as much of a danger as they could be a benefit. Delay makes many things possible.”

Right now, delay was giving Anton a headache. “Have you seen enough?” he asked.

“I’ve seen plenty, but I have to stay, for the sake of putting on a show of my own.” Dr. Grable looked at Anton, probably reading entire volumes from the paleness of his face and the pinch of his mouth. “Why don’t you go see if you can wrangle that pain potion out of Dr. Wictoryn for me? It comes in liquid form, so you could bring it out like you were carrying an innocent cup of tea.”

“You want me to fetch you tea.”

“With a biscuit on the side, if you please.”

It wasn’t quite a dignified request, but another crack went off and Anton decided he’d rather lose some dignity than his composure, not to mention his hearing. He walked back into the Institute and headed straight for the infirmary. When he got there, though, there was no one in the main room. He checked the doctor’s office—also empty.

There was, however, an open door to the right of her desk that led directly into a set of wide, dimly lit stairs. Anton stepped up to it, acutely aware that he was trespassing but just as disturbed by what he saw. If the clinic was muted with sound-deadening glyphs, then whatever was down that staircase had to be louder than the Devil himself, if the number of glyphs painted across the interior of the door were anything to go by. Equations for diminishing strong scents were there as well, glyphs that pulsed with magical suffusion. What the hell was down there?

Another crack trickled in through the open infirmary door, and Anton, slowly filling up with dread, began to step down the stairs. He’d only ever seen glyphs like those once before, on a tour of the Tower of London when he was a boy. It wasn’t used as a prison these days, of course, but the keepers of the place maintained all the old magic for the sake of history, and Anton vividly remembered the glyphs on each of the tower’s interior doors: for silence, for deadening scent, for dimming the mind, for diminishing hunger. It was magic that turned prisoners into thoughtless, desireless bodies, only people because they were still drawing breath.

Anton reached the bottom of the stairs, where the miniscule natural light gave way to a freshly-lit row of torches. He followed them down a short, stone-walled hall, then cautiously poked his head around the corner at the end of it, toward where the voices were. What he saw was both anticlimactic and devastating at the same time.

Dr. Wictoryn was tending to a man sitting on a bed. He had a collar around his neck, unattached to anything, but Anton could tell there was magic in it. He looked comfortable enough—the room was clean, he was fully clothed, and there was a rough toilet in one corner and a stand covered in books beside the bed. As prisons went, it was quite nice. That was not the surprise.

The surprise—and it shouldn’t have been, Anton felt that to his bones—was that the man being tended to was Gerard Montgomery, lately of the University of Zurich, who had tried and almost succeeded in murdering Anton a year ago.

It was an even greater surprise when he looked up, saw Anton, and grinned with caustic recognition. “Look what the maelstrom has dragged to the bottom of the sea with us, good doctor! Seiber, old chap, get in here.”