I put this out on FB, but figured I'd connect you all here as well. One of my early publications with "the publisher who shall not be named" is being re-released as a giveaway. It's contemporary, it's silver foxes, it's got a chronic illness, so take care if that isn't something you care to read. It's sweet, and it's for you. 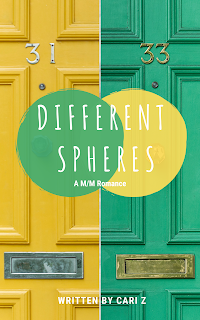 Gil Donaldson returned to his hometown of Boulder, Colorado, after a diagnosis of multiple sclerosis cut short his teaching career on the East Coast. Waking one morning to find that his vision has gone blurry, which makes driving himself to the hospital out of the question, Gil solicits the help of his reclusive neighbor, Warren Masters, to take him to the ER.

The two men become friends as Gil’s recovers from his latest relapse, and while Gil recognizes he’s attracted to the other man, he refuses to act on it. Gil doesn’t like relying on anyone else for his emotional or physical health, and he’s used to being alone, or at least that’s what he tells himself. Warren is a man of few words, but he’s there whenever Gil needs him, and he has only one request for them to be together.
Posted by Cari Z at 12:02 PM

Email ThisBlogThis!Share to TwitterShare to FacebookShare to Pinterest
Labels: because I love you, Different Spheres, free story