Surviving the Change and a writing update!

I've got a new (re-) release out today! Surviving The Change is back, with updated edits and a new cover. If you like my shifter stuff, you'll probably like this too ;)

Also, real quick--A Monstrous Light is coming to my Patreon. This is a new story, posting in long pieces (around 10k) every month and exclusive to Patreon until I'm done with the first draft. If you're interested in reading, you could sign up (wink-wink). I'll probably post an excerpt here tomorrow since I've got a zillion words to write today and a homework packet due. ANYWAY! I'm on Patreon here: https://www.patreon.com/Cari_Z 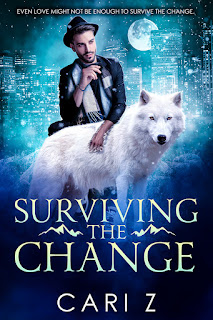 Surviving the Change on Amazon

A shifter without a mate—a man who's afraid to trust. Time is against them and even love might not be enough to survive the change.

Dan Bailey is a loner, a shifter without a pack that no pack will accept unless he has a mate. He's only looking for work and a few beers with friends when he meets Blythe Kenner, and suddenly his priorities change.

Blythe doesn't trust anyone—especially shifters. All he wants to do is bide his time working behind the bar while getting his law degree. That is until Dan walks in and makes it his sole vocation to get under Blythe's skin…and his covers. Blythe never counted on having a shifter as a lover, and complicated doesn't begin to describe how he feels.

Dan knows how he feels and he's not going to let Blythe go without a fight. But time is running out. A rival pack isn't happy with Dan's living arrangements, and if Dan can't win Blythe's trust soon, their very lives will be at stake.