Notes: Hi darlins! I've got *looks at calendar* a huge homework packet AND novel revisions due this week, so today I'm going to give you an excerpt of A Monstrous Light. This is the dark fantasy story I'm starting for my peeps over on Patreon, and it's going to be delicious. It's the kind of gritty, grimy stuff I don't write often, and I'm planning to publish it in four big chunks, each one with a commissioned drawing. Never fear--eventually I'll get it out there for everyone else too! 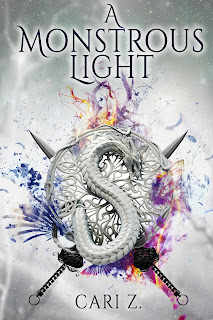 Beniel Tallance woke up to the hoarse sound of a mountain drake’s morning caw, with the smell of mildew in his nose and the taste of the evening’s wine sour in his mouth. He cursed his drunken last night self’s decision to get drunk and take shelter in this dank old barn, full of nothing but ancient horse shit and rotting straw. Fuck, it would have been better to set up camp in the rain than to fall asleep on a pile of bug-ridden old grain sacks that had, it seemed, disintegrated into a solid, soggy lump on the floor beneath him.

“You wouldn’t even recognize yourself if you didn’t do at least one stupid thing a day,” he grumbled, annoyed by the truth of it. The fact that he was in the abandoned village of Emmen Bar searching for a creature that might not even exist six months after gaining his freedom was proof of that.

Freedom. Ha. What freedom did he have now? The freedom to make all the decisions for himself he’d never wanted to anyway. The freedom to fuck whomever he pleased when no one was pleasing to him, to eat whatever he willed when nothing was tempting to him, when go where he wished when the only place he wished to be was with the ghost he was searching for.

It helped that he knew the alternative to his wanderings. Beniel would sooner pull out all his own teeth than return to the palace and be shackled to the new king. He trusted Fandir more than most, which was still less than nothing, but he would not bind himself to another royal. He couldn’t.

Not when the one he had been meant to spend his life with was gone.

Shit, if he kept this up he’d lose the will to move and just lie on the bunch of mildewed sacks until rising, implacable rage tore him out of his deep despondence, and it hurt to push himself that far. He’d done it twice since the massacre, and while he hadn’t regretted not being able to let himself lie down and die, it nearly fucking broke him to be forced back to a place where he had to feel.

Beniel rolled off his back and onto his side with a groan, then slowly got his hands under him and pressed up until he could lean against the wall of the barn. Gods, he felt like shit. His head pounded and his stomach roiled, soured on a dinner of wine and nothing else. His hands trembled so badly he would barely be able to grip his sword if he needed to.

Disgraceful. What would Konnar say if he could see this pathetic display now?

No, it was no good for Beniel to try and shame himself with the memory of Konnar, not when he knew full well that the other man would have brought him water mixed with milkroot, to settle his stomach and ease the pain. When he knew Konnar would tease him for it, but not shame him, and stroke those long fingers across his scalp until his headache went away at last.

The hands of an artist. A musician. A scholar. Not a killer. That Konnar had been destined to be the greatest killer the Empire had ever known was the cruelest of ironies.

Beniel coughed once, to clear the dust from his lungs, then forced himself onto his feet. He staggered out into the damp morning air, wincing as a particularly rotten hunk of bag sloughed off the back of his jerkin, and headed for Flower.

Flower glared at him with her beady orange eyes, jaws straining at the bridle that bound them nearly closed. Shit, he’d forgotten to take it off last night. She hadn’t been able to forage at all. “Fuck,” he said, reaching for her head. “I’m sorry, let me—”

One of Flower’s forelimbs rose up and slashed the back of his forearm so fast he couldn’t dodge. Four long clawmarks bled through the filthy cloth of his shirt, and Beniel winced and began to swear as the pain finally broke through the haze of his morning.

“Godsdamn fucking waste of a fucking egg, you piece of dragon shit,” he cursed through gritted teeth. Flower didn’t look sorry. She just looked satisfied. “I should take you to the edge of the Waste and feed you to your ancestors,” Beniel growled. “We’re close, you know. Less than five miles from here is the southern edge of the fucking Waste, and you’d make a nice meal for the Great Ones, you utter bitch.”

Flower glared at him. He glared right back, cradling his wounded arm against his chest. A moment later, her long, sticky tongue lolled out from between her close-clamped jaws, licking over the deep scratches. Almost immediately, they stopped bleeding. A moment later, they began to scab over, and the pain eased.

Drake spit was almost as good at treating pain as milkroot, but a lot harder to get. Drakes were smart creatures, too close a cousin to dragons not to be clever as fuck, and they knew their own worth. No wonder Flower was angry with him, after Beniel had abandoned her with her bridle and saddle still on while he collapsed in a drunken stupor.

“Sorry,” he said, ducking his head to emphasize his apology while scratching just behind her dark green eye ridges to show that he forgave her as well. “I’ve been a shitty companion lately, haven’t I?” He undid the buckles on the bridle and eased it off her long, boxy head, then removed the saddle and the rest of his supplies.

“Go hunt,” he told her, and she vanished into the forest with ease. It would mean a later start for them today, but then…where were they even going to go next? Emmen Bar had been his last solid lead, a town whose people had vanished seemingly overnight. Surely a terrible wrong had been done here, something to warrant the attention of the newest of the Great Ones. He had come here full of hope, desperate for answers, and found…

Abandonment, yes. Likely because of crop rot, which happened often when people settled so close to the Waste. A town that had been carefully evacuated, not destroyed, not wronged. Just…stupid people moving to correct their stupidity. An utter and complete waste of time.

Every move he’d made, every rumor he’d chased, every mile he’d trod for the past six months had been a fucking waste of time. The only good to come from it was getting more distance from his own memories, and Beniel was beginning to think that he could have done that in a warm tavern somewhere instead of driving himself to the edges of the goddamn continent staring the worst of humanity in the face. He’d been tracking down tragedy after heresy after horror, and for all that Fandir was convinced that the rumors about the revivals were truth, Beniel was beginning to lose hope.

Ugh. No more philosophy this early in the…he squinted up at the sky…eh, sure, it was still morning, or close enough. He needed to eat, drink, and bathe, not necessarily in that order. He reached for the waterskin attached to the outside of his pack and downed every drop of it in one long pull, then set it aside and pulled out his pots. Finding wood was easy enough—finding wood that was dry enough to use was another issue entirely.

Shit, but this was going to make his head hurt. Working minor weavings had become so much harder since Konnar…left, was the easiest way to think about it, he’d found. Without the prince’s innate powers to draw upon, Beniel was left to rely solely on his training and the strength of his will, and he hadn’t been the most dedicated student. A village charmweaver could probably run circles around him right now, but…he needed a fire, damn it. Beniel took off the glove covering his left hand, closed his eyes, and began to visualize what he needed.

Threads for heat, not flame…dimmer…dimmer, or you might set the whole godsdamn forest on fire, you fool. Weave them into the shape you need, pull them tight in your mind, draw them through your own soul to power the web, and then… He hissed an exhalation, extending the fingers of his sacred left hand toward the pile of wood. A rush of heat arose from the wood, dampness sizzling to the surface and evaporating into the sky as the weaving did its work. A little bit more and—

Beniel’s stomach suddenly rebelled, and he belched foully into the air, disrupting the power’s flow. The weaving vanished, and so did the steam. A second later, most of the water he’d thrown back made its way onto the bare dirt—not onto the pile of wood, at least.

“Fuck,” Beniel gasped, hands on his knees as he strived to catch his breath. “Fuck.” He couldn’t remember the last time a simple weaving had strained him so much. Had he really let himself fall so far in so little time? What would Konnar say?

“Nothing,” he gritted out, willing himself to believe it. Konnar was gone, gone, vanished in a monstrous light. Nothing Beniel did would bring him back, and chasing tales of death magic was like chasing down a debt—everyone was good for it until the time came to pay up, and then all of a sudden they were good for nothing at all.

Well, fuck it. He needed to get clean anyway. He got out his firestarter kit and set a small flame to burning, praying that it would catch, catch, damn you catch—

The flames spread. Smoke rose, and the wood began to burn in earnest.

Thank the Great Ones for small favors. Beniel poured the contents of his other waterskin into his single pot and set it in the flame, then began to pull his glove back on. The filthy appearance of his hand stayed him. He should bathe. It had been over a week since his last one, easily. Even if there had been people here, they would have been right to turn their noses up at him before he slept in their old, nasty barn.

Fine. Time for a cold bath. Beniel grabbed his bag and headed in the direction of the stream he could hear burbling a little ways off.