February has been the month of radio silence, huh? Blog silence. Whatever. I've been brutally sick over the past 24 hours, so please forgive my terseness. Goddamn flu.

It's been an odd, busy month. I finished the rough draft of my next novel for Samhain, only to discover that Samhain is going to be slowly closing their doors as of yesterday. This means they don't get the new novel, but they've already got Tempest lined up and ready to go, so it'll be released as planned in April, and then...I don't know what will happen to it. I feel like this particular book could be imagined as a traveler making all their plans, packing for their voyage, racing for their ship and getting on board, only to be informed that the ship is sinking. Whether it will end in rescue or in being consigned to oblivion, I just don't know yet. I was incredibly, astonishingly pleased to be accepted to Samhain last year, and even though things aren't working out like I'd imagined, I'm still happy to have had the opportunity to work with them.

On the plus side, I now have a new, completed novel that needs a home, and a little more time to polish it before I send it off. I'm also getting back rights to an older story that I'm looking forward to resurrecting, probably at Dreamspinner. I haven't posted any vignettes or a new story yet, but I'll have a preface ready for you on Tuesday, with the new story itself following probably the following week. I just found out that I'm going to have a few incredibly wonderful, incredibly early paperback copies of Where There's A Will available for the RT convention, which also rocks.

That's the snapshot for now. I'm under the weather, which makes me feel a bit more pessimistic, but undoubtedly things will be looking up soon. 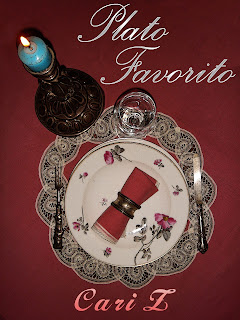 I now have fantastic Spanish translations, courtesy of Traductores Anónimos, for Wanting More and it's little sequel, Favorite Dish. Deseando Mas y Plato Favorito can be read on a separate page on my sidebar here: http://carizerotica.blogspot.com/p/deseando-mas-cari-z.html,

or on AO3, where you can also download them for free: http://archiveofourown.org/works/6067804

I even got lovely new artwork! Thanks so much to Traductores Anónimos for their work, you guys are awesome. Enjoy!

Contest Winners + a present for me!

The 10 Simple Tips contest ends today, and the lucky winners are:

Congratulations, and thanks so much to everyone who played along, I love you. Happy Valentine's Day!

I'll try to contact all of you directly. If I don't get through in the next day and you see this and go "Wtf, Cari? Wtf." Reach out, darlin'. Just reach out.


As far as the present for me, well...let's just say, it's something that my Spanish-speaking audience will enjoy too. Yes, I have another gift from Traductores Anonimos, and I'll be passing it along to you all later this week. Yay!


Guess what I have. At laaaast. 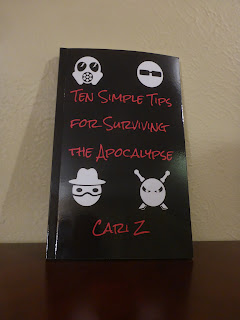 Yes, that would be a paperback copy of Ten Simple Tips For Surviving The Apocalypse! The formatting is courtesy of PD Singer, an incredible author friend with all the computer skills I lack, and I have three of these to give away for Valentine's Day! Because of course, what goes better with Valentine's Day that a mutant apocalypse end of the world road trip fic? Nothing, that's what. I'll send them anywhere (they're pretty small, thank goodness; not to pricey to ship) so please play along!

How do you win? It's pretty simple: just show me some love. Leave me a nice note on Facebook or Goodreads, write a review for something of mine you might have read (it doesn't have to be a super review, btw; you like what you like, be honest), rec a story to a friend, and THEN! Key point here: leave a comment here or email me so I know you're playing along. This is mostly based on the honor system because I just don't have the time to check up on grown adults playing along with my Valentine's Day game.

Please play! You could win a copy of Ten Simple Tips, and even if you don't, you'll be my Valentine anyway :)

The cover for Where There's A Will, the third story in the Panopolis series, is revealed at last! This story comes out at the beginning of May, and I'm so excited about it.

Why? Because superheroes and supervillains, that's why.

Email ThisBlogThis!Share to TwitterShare to FacebookShare to Pinterest
Labels: cover reveal, Where There's A Will

Sooo...good thing that Redstone finished up last week, because my honey and I have just discovered the joys of "the interminable home improvement project." You know the type. You think you're going to do this one thing, and yeah, it's kind of big but you can handle it, just a few weeks and some hard work and the result will be you getting to lounge like a boss in a clawfoot tub (those, by the way, are really fucking heavy. Like...really heavy. *groan*).

Only then you notice a leak trickling down from the upstairs bathroom into the lower one, and--wait, no, two of them, and--oh. Wow, look at all the rot up there! Let's hope the floor doesn't collapse beneath us... Heeeey, no, we can fix all that. We just can't shower at home or use the upstairs toilet while we're doing it. SO, basically, the point is...time=zero, because this is the week of fixing shit. I'm mostly the gofer, which is fine with me.

Hmm, let's see, better stuff...um, I should have a contest going next week for a very special little book! That'll be fun. I'm planning the story that's starting next month, yay. I bought tickets to Vegas for RT, and also bought tickets to go see my brother and his growing family (new baby) in March--yeah, working the family faction there. We're almost ready to nail down our trip to Cambodia to visit my MIL in September, which will be fucking amazing and I'm so excited to go.

And ooh ooh! Shadows & Light is available for preorder from Pride Publishing! If you order from their website, you get to read it a month in advance. So...yeah. Fun! 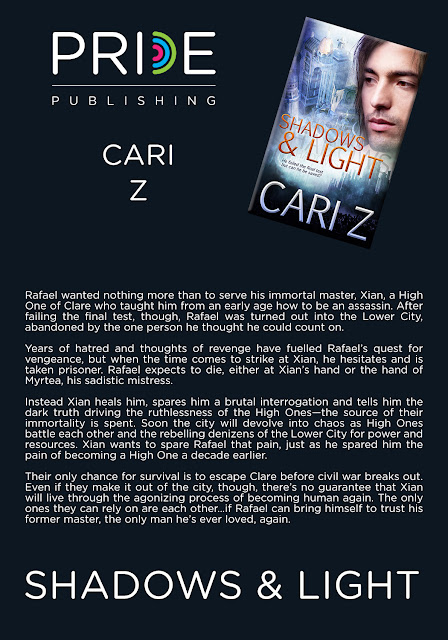