The Second Coming of Chicken Little

Notes: Hey there! So, knife camp was fun, and having my ficwife and her gent around is great, but it hasn't left time for writing. So, today you get something very new, and weird, that I wrote for my MFA. It's got a chicken, animal sacrifice, and minor acts of possession. If any of that bothers you, please stop here.

I'll have more of The Tank for you next week!


The Second Coming of Chicken Little 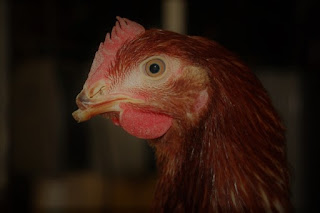 The chicken is lying in a bag, hanging from the handlebar of a bicycle. It’s a young chicken, and clearly the lowest in the flock’s pecking order, so to speak—its feathers are patchy and half of its upper beak has been broken off. It’s in a bag, but it’s not tied up. It’s just lying there on its side. No scratching, no fluffing, no clucking. This is a chicken that has accepted its fate. This chicken is one with the universe.
It shits in the bottom of the bag. Take that, universe.
The bag sways back and forth on the handlebars for a long time, and the chicken sways with it. The movement is soothing, despite the heat and the general foulness in the confined space. The chicken’s beady eyes are half-closed, mesmerized by the rhythmic motion. When it stops, the chicken doesn’t even realize it until the bag is shifting, up and down before bump-bump-bumping along in time with the pace of whoever is holding it. The chicken is disgruntled, but it still doesn’t speak. Why bother? It’s going wherever it’s going.
The murky light turns dim and dark, and the air in the bag gets even closer. The end of it opens up, and the chicken stares up at a large, freakish face—no beak, no wattle, and a comb so short it might as well not even be there. The face makes an unintelligible grunting sound, then huge hands descend to pluck the chicken from its plastic nest.
Now the chicken has something to say, and boy does it say it. It curses out the man holding it, all the people sitting in a circle stound them like a bunch of slow, stupid bugs, and the undignified way it’s suddenly dangling head-first over a grimy old clay pot, the edge rimed with a pinkish-gray foam that smells suspiciously like death, and hey wait, what’s that shiny thing coming close to its—
One hand holds it steady while the other one cuts its throat. It flaps, startled by the pain, even more startled by the way it begins to leak. Its head is covered in wet and salt, and its vision goes blurry. It’s shaken a little over the pot, plink plink plink to get the blood in, then turned upright and set on the packed earth floor to the left of the sharp-handed, freak-faced human.
The chicken is dead. It just doesn’t know it yet.
The stupid bug people make stupid noises, pointing and staring at the chicken. The chicken ignores them, because it is not moving, thank you very much. The chicken is happy just to sit here and take stock of its life and impending death and wonder where it all went wrong. The bag, definitely. Leaving the bag is where it all went wrong, the chicken remembers that now.
The human to its right says something new, pours something else into the pot, stirs it all together and throws some of the liquid onto the back of chicken, and then—
Oh. Goodness. How strange. It’s like…like being a weed clinging to the crevice of a rock, only the rock is inside of you and the weed is outside of you, but it tells you what to do and you do it. The chicken knows that the best thing for it is not to move, but it doesn’t feel like it can refuse the weed-voice. It’s clinging to its tiny brain, firing up nerves that have been resignedly shutting down for the past thirty seconds. The chicken, who is still slightly more alive than dead, but definitely more dead than alive, gets to its feet.
It reels to the left first, and runs right into the wall of the hut where this travesty is taking place. It goes right, gets up speed for a few feet, then trips over the desiccated maw of a crocodile who predeceased the chicken by decades in the center of the room, where a pile of bones makes a nest for the pot. The chicken falls onto its back, and is still for a long moment. The human bugs make noises, very loud noises, which wouldn’t bother the chicken except that the weed inside its head is very insistent that it keep moving, because “hand to the ancestors, what are chickens made of these days that they can’t handle a few seconds of post-sacrificial cavorting?”
The chicken kicks once, twice, then manages to flip onto its belly.
There is loud noise again, but it sounds higher this time, happier, in a way. The weed begins to withdraw its tendrils from the chicken’s brain, taking away most of its extra perception as well, which is really for the best considering what happens to it next. The chicken is completely out of it when new hands, tentative hands, pick it up and, with a great deal of prompting, break its wings in their sockets. It barely even feels the vibration run through its body when those same hands break its legs as well, although a final wisp of indignation does manage to float through its tiny brain when the hands have to break its legs again, because they didn’t do it well enough the first time. Honestly, “what are people coming to these days, when they can’t even break the legs of their chicken sacrifices like they’d break the legs of their enemies, swift and sure?”
Wait, what? Never mind, never…never mind…
The chicken is plucked, and cooked, and eaten, and knows no more.
Posted by Cari Z at 11:20 AM