Whoa, hey, so. Villains is complete in rough draft form. Beta readers, I'll be getting it to you sometime after next weekend, once it's had a chance to percolate and for me to fix the most egregious errors. In the meantime though, how about an excerpt? 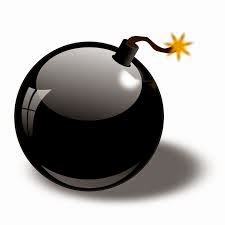 At four o’ clock, the daily news program that played on the televisions we kept in the corners of the lobby suddenly switched from a prerecorded bit about the local farmer’s market to Mindy Parks, one of their evening anchors. “Breaking news!” she declared, her usually-perfect hair a little rough around the edges, like she’d tucked it back too fast. “Police reports are coming in about an attack on an armored car in the financial district! We are working to get a reporter on scene, but amateur videos are already being uploaded to the CrimeWatch website. We’ve pieced something together for you here. Please be aware, this is graphic footage that could be disturbing to some viewers.”

The picture cut to a video of a woman’s face, suddenly going shaky as an explosion sounded behind her. My breath caught in my throat as the camera phone turned to the scene, where an black armored van—one of the deposit vans, some of our bigger clients used them to get cash to the bank—had been rolled onto it’s back, the undercarriage still smoking. People ran away from it as a man in black emerged from the fray to touch the locked back doors of the van. A moment later the lock was slagged to nothing, and he pulled the doors open, then darted to the side as gunfire emerged from the interior.

“It looks like the Mad Bombardier is on scene,” Mindy said, her face appearing split-screen with the video footage as she confirmed my worst fear. “He’s taking fire—wait, where did he go? No, wait, he’s just cleared the way for Pinball!”

Pinball was a Villain who had once interned for a scientist who wanted to test a new rubberization process. He’d prepared a vat of the liquid to dip objects into and, sure enough, his intern had fallen into the vat and emerged coated with a super dense, super elastic material that gave him the ability to bounce around like a, you guessed it, pinball without getting hurt. He used his body as a wrecking ball and could leap for enormous distances on his super bouncy feet, and my jaw dropped along with everyone else’s as Pinball bounded into the van. Huge dents appeared in the sides, pressed out from the inside, and I heard the woman holding the camera phone scream.

“It’s hard to know just what’s going on in there, we’ve got to view of the interior of the van, but it appears that Pinball is—oh God, is that blood? That’s a spray of blood, right out the back of the van, some sort of arterial—God.” Mindy covered her mouth for a moment. “I think we may have to assume the worst is happening in there, I’m afraid the guards are either dead or dying, we need-”

Sure enough, the Hero had arrived on the scene, moving at his own inexorable pace. He wasn’t as fast as Pinball but he couldn’t be moved by him either, and once he had a Villain cornered there was nowhere to go. He moved into the van and a moment later, it began to vibrate. The van’s metal panels shook until they began to crack, and I could see armed police officers closing in on the van and getting ready to fire. After all, their bullets wouldn’t hurt Freight Train, and the guards inside had to be dead by now.

Suddenly the view was completely obscured by a rising, uniform curtain of thick grey smoke.

“This is one of the Mad Bombardier’s favorite tactics,” Mindy said, avidly watching the scene. “He uses a literal smokescreen to shield his movements from the police, and the smoke itself is toxic to inhale and can cause instant nausea and vomiting, which naturally dissuades any pursuit. I assume this means that—yes, yes, the smoke is clearing now and it looks like the entire front end of the van has been blown away! Sources on location tell us that neither the Mad Bombardier nor Pinball are at the scene any longer. It looks like two of Panopolis’ most notorious Villains have, once again, escaped capture.”
Posted by Cari Z at 11:08 AM