A Holiday, a Blog Hop and a New Release--big post, whoa...

First off, Happy Independence Day to my fellow Americans! 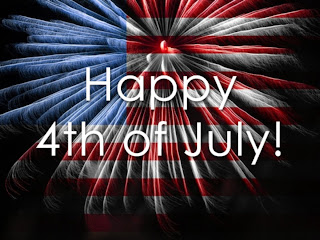 I hope you have a delightful day, wherever you are.  If that means no fireworks (like here, because, hello, fire, we've already got it in spades) or a display that lights up the sky, family and friends over or a more thoughtful, solitary day, I wish you the absolute best.  If you're not American, that's cool, I wish you the very best as well, and hope your own independence day is as fervent and meaningful as ours is. 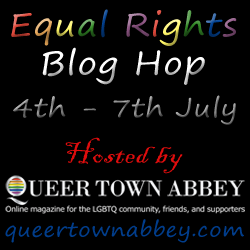 Read more about it here: http://queertownabbey.com/join-the-equal-rights-blog-hop-july-4th-through-7th/

The topic of the hop is: what does being a member of the GLBT community mean to me?

Those of you who read Love Letters (the story that is both the joy and bane of my existence) know that I've been doing a lot of looking at Revolutionary-era documents for it, and of course one of the most famous of those is our very own Declaration of Independence.  It's a brilliant document, and even more so than the Constitution I think it highlights the spirit on which our country was founded:

We hold these truths to be self-evident, that all men are created equal, that they are endowed by their Creator with certain unalienable Rights, that among these are Life, Liberty and the pursuit of Happiness.

This, right here, this is important, guys.  I'm not a religious person but I do very fervently believe in equality, regardless of race, creed, gender, sexual orientation, geographic location or any other thing that someone might want to use to force a divide or build up a boundary.  Being a member of the GLBT community for me means being true to myself and my thoughts and feelings, while honoring the wide variety of personal realities that other people bring to the table.  It means reaching out to new people, learning new things and new perspectives and not letting myself be boxed in to one way of thinking just because something or someone bigger and louder than myself has deemed it "right."  It means supporting equal rights of marriage for everyone, not just for the people born with the orientation that society has deemed acceptable for the longest amount of time.  It means being a little more awake and a little more aware of what's going on in the world.  I strive to be a thoughtful, informed and involved human being, and having an open mind and willing heart are integral to how I see myself.  I'm not always right, far from perfect and have so much to learn, but I feel good about the fact that I'm continually, consistently trying.

Anyway.  In honor of the blog hop (there are prizes associated with it, guys, go check it out and you could win some fun swag) I'm giving away an ebook of my newest release, Summer's Child, newly released by Total E-Bound.  It's the follow-up story to The Solstice Gift, and guys, this is the one that has the happy ending.  So no more screams when you read it, okay?  You'll be happy, I promise!

One commenter between now and July 7th gets a copy, and if you don't have The Solstice Gift, hell, you get that one too!  Because why not!  The winner gets picked on the morning of the 8th, and you get the story right after.

Here's a little more info on the book.  Please, don't judge it by it's cover, my man doe NOT have wings or that hair.  Or that expression.  It just happened. 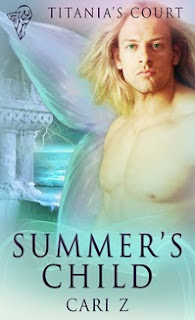 Will the distant but brutal past destroy a changeling’s hope for a better life with the Summer Fae?
Dis, a human changeling, is tasked with delivering Oberon’s solstice gift to his estranged wife, Titania, at the Summer Court. Leaving behind the land where he barely survived to adulthood is harder than he expected—it means leaving behind his lover Marten as well. Dis hopes that once his task is completed, he and Marten can be together again.
The Summer Fae welcome Dis to their court, but there’s more going on behind the scenes than meets the eye. Dis struggles to keep Oberon’s gift for Titania safe while being continually tempted by the wilful Summer Fae to disobey, and worse, he loses contact with Marten. Dis is left with no one he can trust, and is faced with the impossible choice between disobedience to Oberon, who will surely kill him once he finds out, or losing the man that he loves forever.
Posted by Cari Z at 12:31 PM