Notes: Have a fun, sexy shower scene, because we all deserve a good damn time before I fuck things up again ;) But not too much! 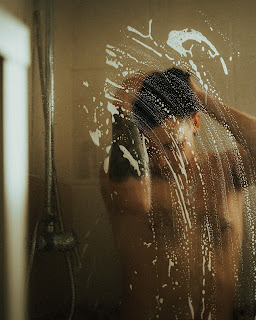 Never in a million years had Johnny ever thought he’d wake up in the morning next to Charlie Verlaine in bed, his arm slung over Johnny’s waist like it belonged there.  It was like being in a dream…if his dream included an overly-full bladder making its presence known, and a set of sheets that he really should have changed last night but weren’t because—hello, tired and sexually sated meant there was no way he was doing anything other than falling asleep once round two was over. And round two had been…it was…

Johnny shook off the memories before he got hard again and eased out of bed, heading for the bathroom. He relieved himself, pulled off his socks—naked except for socks, so classy—and got into the shower. It was the weekend, at last, and he only had the usual amount of paperwork to do instead of the crippling amount that had stacked up ever since they’d moved the students to Euryale. He fully intended to do everything he could to convince Charlie to stay with him for breakfast, and then maybe lunch, maybe dinner…hell, maybe the weekend.

Don’t move too fast. Except it didn’t feel all that fast, maybe because they’d known each other before, maybe because Charlie hadn’t had any problem at all taking things to the next level.

Speaking of…the door to the bathroom opened, and a second later a hand knocked gently on the wall right next to the shower. “Mind if I join you?”

“Not if you don’t mind being a little cramped,” Johnny replied, scooting over a little.

“Are you kidding? Your shower has walls and a tile floor, that makes it way better than most places I’ve cleaned up in over the past decade.” He slid inside next to Johnny and took up the heat of the spray for a moment, wetting his hair down with a sigh. “Your water pressure is a lot better than mine.”

“Um, thanks?” Despite his best intentions, Johnny felt himself getting hard again. “I’m almost done, I just have to rinse off and then you can have it to yourself.”

Charlie cracked an eyelid and looked at him. “Do you think I want to be in here by myself?”

“I see it.” Charlie cracked the bottle open and maneuvered it so he could both hold it open and pour it into his own hand. Johnny reached out belatedly to help, but by then Charlie was done. He knelt down in front of Johnny with easy grace, then leaned forward and very gently ran his bristly chin down the length of Johnny’s cock.

Okay, that had never felt so good before. Johnny leaned back against the shower wall and grabbed the root of his cock, holding it steady as Charlie licked and kissed the tip, finally sliding his mouth over the head. “Oh, fuck,” he whispered, spreading his legs wider to keep himself from falling over.

Charlie hummed around his cock. It might have been an affirmation, might just have been a way to light up his nerves, but whatever the reason, it worked. Johnny held the base of his cock tighter, not ready to move on even though his balls were already starting to draw up. Charlie kept it slow, his finger and mouth working in a rhythm that made Johnny ache for more. When he got it in the form of another finger, he moaned with how good it felt, even though the penetration was a little rougher now.

Charlie pulled back. “Can you get the lube?”

“Yeah, I can…” Once he could coordinate his brain enough to reach it, he did so, wincing as Charlie gently freed his fingers, then covering them with more slick. This time when Charlie entered him, it was smooth and easy. Johnny groaned, then shouted as Charlie rubbed right over his prostate. Two fingers became three, and Charlie’s warm mouth sucked his cock inside once more, and a minute later Johnny was holding his own cock so tight to keep from coming he thought he might bruise it. “Do you want to…do you want…” Complete sentences were giving him trouble right now.

Charlie sucked hard along his length, then said, “I want to get you off.”

“Do that with your dick inside me.”

He grinned, and Johnny just about slipped off his feet. “Okay.” The shuffle from kneeling to standing was less graceful, and without the fingers spreading him open and rubbing him to ecstasy Johnny felt slack and empty, but then Charlie turned him around, bent his knees a little to get just at the right level, and slid his slick cock all the way into Johnny with a slow, sensual glide that made his eyes roll back in his head.

He wanted to swear, but he didn’t have the breath for it—wanted to curse, to beg. Thank god he was getting the voice fucked out of him instead, long smooth strokes that left him gasping and aching in the best way. He was still holding his own cock, holding back as best he could, because as soon as he so much as moved his hand, he was going to come.

“You feel so fucking good,” Charlie whispered in his ear, and—okay, maybe he wouldn’t have to move his hand to get off at this rate. “Can’t believe it, I can’t—shit, I can’t stop, I’m going to come, I need to—Johnny, can you—”

It was almost simultaneous, twin peaks of pleasure drowning them both in bone-melting bliss as they came. Johnny tilted his head back against Charlie’s shoulder, the water flattening his hair as his lover pressed a kiss to the side of his face. “Hey,” Charlie said, a smile on his face.

“Hey,” Johnny replied, beaming so hard his cheeks hurt. “That was—” Wait a second…what was that sound? It stopped…then a few seconds later, it started up again.

It was his phone. Someone was calling him, over and over again.

Charlie lifted his head and glanced toward the door. He’d heard it too. “Shower’s over, I guess.”

“Yeah, I have to take that. You can stay in here as long as you want, though.”

Charlie eased out of Johnny’s body, then grabbed the washcloth and made quick work of soaping it up. He rubbed it over Johnny’s back, then between his legs. “I’d rather come with you.”

You already did, Johnny wanted to say, but he held it in. Barely. “Okay.”