Notes: FINA-FUCKING-LLY! Well, not actually fucking yet, but we're making progress toward mutual goals! Not a super long one, darlins, but I'm in the middle of my MFA residency right now, so I count any words down as a win. 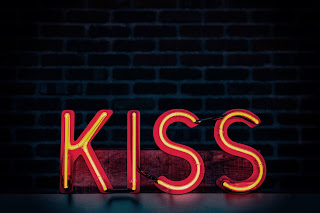 Charlie had never been much of a romantic. Nothing about his life had ever lent itself to positive thoughts about romantic love—not being young and watching his parents constantly fight over everything and nothing, not hitting puberty and realizing that he didn’t know how he felt about girls or boys, which had taken years to resolve to his satisfaction, and not his career, which had mostly revolved around intense training punctuated by brief, terrifying missions. Romance up to now had meant getting together for takeout in someone’s quarters, maybe watching a movie together before fucking. And, he realized as he kissed Charlie, he wasn’t exactly breaking the pattern here. Takeout: accomplished. Mission: makeout.

Except he hadn’t come here with the intention of kissing, or fucking, or anything other than checking up on Johnny to make sure he was okay. And he hadn’t been, but now he was, or seemed to be, and he was talking like he didn’t want Charlie to go, and Charlie was sure he hadn’t imagined the way Johnny had been looking at him, and…

And he went with his gut, and kissed him.

Johnny didn’t react at all for a moment, long enough for Charlie to second-guess himself and break off the kiss. You shouldn’t have pushed it. “I can go, it’s fine—”

“Oh my god, no, just get over here.” Small but strong hands grasped the front of his shirt and hauled him in close, and then…

It was awkward. There was no other word for it. Charlie only had one arm to hold himself up with, and that single limb didn’t have the leverage for the job, so instead of meeting in a kiss he ended up falling right on top of the smaller man, driving him into the arm of the couch with an “oof!” Charlie tried to get his knees under him, but with his feet still on the floor he wasn’t in a good position for it. He wound up with his chin pressed against Johnny’s skinny sternum, his arm stuck against the couch, with Johnny pinned beneath him.

Johnny started to laugh. Not just a quiet, embarrassed chuckle but a belly laugh, the kind that rippled through his whole body like an earthquake, leaving trembling muscles and an aching stomach in its wake. He laughed so much it was contagious. Charlie joined in, finally rolling so that his back was against the couch and he could at least stretch his legs out a little. He laughed until he cried, and wondered how long it had been since he’d laughed like this.

Shit. He couldn’t even remember, but that didn’t matter. Not right now.

“Okay, that—” Johnny sucked in a breath and tried again. “That, um, that could have gone better. Sorry, I should have kissed you back in the first place, but I was really surprised. I didn’t think you were interested in me like that.”

“I wasn’t sure I was, until I came to see you tonight,” Charlie confessed, his own chuckles tapering off at last. “And then all of a sudden I figured it out.”

Johnny looked at him with a small, private smile on his face—nothing like the ebullience of a moment ago, something subdued and secret. What did that smile mean? Charlie opened his mouth to ask.

Charlie’s brain switched tracks. “Did what?”

“Figured out you were interested in me. Do you. Um.” The redness in his face probably wasn’t all from his laughter. “Do you want to try again?”

“Kissing you?” Charlie clarified. Johnny nodded. “Absolutely yes, but we’re going to have to switch positions, because I can’t hold myself up like that.”

“Yeah, I figured that out a little too late. I’m sorry,” Johnny apologized.

“It’s okay, just…here, sit up.” Charlie rearranged them until he was the one with his back to the arm of the couch, and Johnny was hovering over him uncertainly, too fucking cute in those boxers—and was that a tattoo just under the edge of his sleeve? Charlie resolved to ask him about it—in a few minutes. Maybe more.

“Okay.” He put his hand on Johnny’s waist and tugged him in closer. “Try like this.”

Johnny leaned in warily, as though his weight was going to be a problem for Charlie, who probably had fifty pounds of muscle on him. He let him come at his own pace, though, settling in with a tentative, then pleased expression. Then he brought their lips together, and then…

Fuck. It was everything all of a sudden, filling all his senses—the taste of Johnny’s mouth, the feel of his warmth and weight, the smell of something soap from a shower and spice from dinner, and the sound of his faint, panting breaths, the moans that seemed to build in the back of his throat and then vanish before they had a chance to emerge from his lips. Charlie wanted to stare at him, to take in every line of him, how good he looked spread out on top of Charlie like a blanket, but he couldn’t—it was too much.

He closed his eyes and pulled Johnny closer, focusing on what they had right now, the heat building between them as they kissed, getting wilder and somehow sweeter all at once. He wasn’t sure how long they kissed for, or who got hard first, but he wasn’t going to let Johnny get away without finding out if he wanted that, if he wanted to get off.

Charlie pulled back just long enough to ask, “Can I—can we—” as he ground up into the man on top of him.

Charlie grinned. “No couch sex for you?”

“It’s not that,” he said with a little grimace. “It’s that there’s an extra wall between my bedroom and Lori’s place next door, and I’d rather not have her hearing…anything.”