Notes: Back in the saddle again! We're starting to both ramp up and wind down, so...yeah, get ready to have some fun! 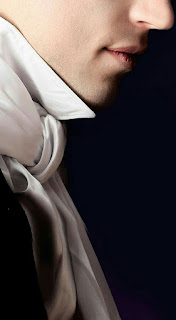 The impending arrival of the new vicomte had the institute running at breakneck pace that morning. Anton and Camille didn’t stay in bed together for long—there was no way they really could, what with the ringing echo of feet pounding through the corridors and the brisk rap of knuckles against doors, reminding guests and residents alike that it was time to wake up, time to be about their mornings, time to get ready. No one entered their room, of course, but the noise and commotion was enough to make Anton nervous, and he was up and dressed before he could fret too much.

“Who is this new viscount, exactly?” he asked, sitting in a chair against the wall as he watched Camille lazily emerge from bed and begin to wash up. “Why does he seem to produce such a furor here, when the last one was very clearly on the institute’s side?”

“Why do you say he was on their side?” Camille asked as he wiped a wet cloth over his groin. Anton forcibly kept his eyes on his lover’s face—if he let his desire get the better of him now, he would never be out of here in time to breakfast with Caroline and Dr. Grable, which would lead to questions he didn’t want to have to talk around.

“Well, he was a member of the party sent to persuade Dr. Grable to come to the institute in the first place. That means that he had knowledge of their worries, the fear of a saboteur working against them from the inside. That must mean that he was trusted, because it’s a rather important piece of information to entrust to someone not otherwise associated with the place.”

“And did he appear to be a gifted elocutionist to you?” Camille pressed. “The sort of man one would want to send to represent them and be a persuasive force on their behalf?”

“Well…” Now that he mentioned it… “No, not really. He seemed mostly very self-absorbed, and a bit, um, light when it came to the actual substance of his conversation.” Caroline would have had a carnival working on a man such as that, if he had survived.

“Precisely. The late Victomte Voclain was a self-serving, overly indulged, small-minded wastrel of a man.” Camille said it like it was nothing, like he casually insulted members of the aristocracy every day. Given his position, he probably did. “He was a useful rube that Jourdain kept on call for two reasons. One, the emperor’s cronies don’t trust anywhere that is beyond their easy comprehension, and having a man like Wilhelm associated with this place was enough to soothe them. He was intensely one of them, a member of court who wanted nothing more than to increase his standing in the eyes of his peers. He could be trusted with valuable information simply because it was in his best interest to know things that other people did not, so that he could lord his superiority over them.

“The other reason he was such a useful man to have here was because Wilhelm’s younger brother, Ludwig, is increasingly ambitious. He was born the third son of the old vicomte, and it was expected he would go into the military, which he did. The middle son, Jacob, managed the estates and household while the eldest went to court. Two years ago, Jacob died, and Ludwig ended his military career to return and take charge of the family estate in Strasbourg. His antipathy against his brother Wilhelm was well-known, and Wilhelm did nothing to shield himself against it through kindness. As long as Wilhelm had a concrete task to perform in service of the emperor, he was protected from his younger brother’s machinations.”

It sounded like a terrible mess in the making to me. “What do you think will happen, now that Wilhelm is dead? It sounds as though Ludwig wasn’t close to his brother, so perhaps he regards it as a boon to be elevated to a loftier position than that which he was born into.”

“I’m certain he does,” Camille said as he pulled on his shirt. “But this is a golden opportunity for him to request a favor from the emperor, and to demand compensation from the institute.  He won’t let it pass by without taking full advantage. What manner of advantage that is remains to be seen, but the truth of the matter is, Jourdain won’t be able to refuse him much. If Ludwig decides to make a menace of himself, with his popularity in the military he could very easily do so in such a way that the emperor himself has to sit up and take notice. If efforts have to be directed away from the Dévoué to handle this, Napoleon will not be pleased.”

“What are you going to do about it, then?” Anton asked.

Camille glanced at him as he tied his cravat. “What makes you think I’m going to take any role other than determining the late vicomte’s killer?”

“Because if it were as simple as that, someone of your skills wouldn’t be necessary. It would be so easy to blame it all on the Dévoué,” Anton pointed out. “This case could be considered solved right now if you blamed it on the Dévoué, and that would redirect the new vicomte’s anger in a direction that’s useful to the emperor. So there must be a reason for not doing it, something I can’t quite see.”

Camille’s expression was a bit hooded. “You think I would lie about a case?”

“I think you would be driven to find the truth,” Anton said, considering his words very carefully. The last thing he wanted was to get into another intractable argument with Camille. “But I also think you already know the truth. You know who killed the vicomte, or at least you have a strong idea of it. How could I now know that, when you’ve had me keep that stasis spell going since we got here?” He pointed at the holster on the bedside table. “But that evidence isn’t something you’ve dealt with since then, so whatever it means, you’re not ready to reveal it. That means there’s more going on here than bringing a murderer to justice, and knowing what kind of place this is now and how much it means to Lord Jourdain and yourself, I think that you would be far more interested in bringing down a grand conspiracy than solving one murder.”

For a long moment Camille simply stared, and Anton began to wonder whether or not he’d genuinely overstepped. But then his lover grinned. “You know me better than I thought. There is, indeed, something unsettlingly vast at work here. How long it will take me to get to the bottom of, I don’t know, but time is of the essence.”

“What can I do to help?” Anton asked.

“Nothing, directly. Continue working with your master, continue to conduct yourself in a manner that does not draw attention to you. Don’t let on that you know more than you should.” His smile faded away. “I don’t want any more harm to come to you.”

Anton was about to press him on what sort of “harm” he thought might rain down, but a blast of trumpets from the walkway outside startled him.

Camille walked over to the curtain and glanced outside. “Ah. The new vicomte is here early.” He looked back at Anton. “We’ll be meeting with him over breakfast, then, if he doesn’t demand a private audience with Jourdain immediately. I suggest we hurry and get a good spot at the table.” He turned his attention back outside. “I have the feeling it will be a very interesting meal.”
Posted by Cari Z at 11:41 AM