Notes: A new post, a new character, and a very strange bit of history. What the heck is going on at this Institute? PS, Happy New Year's Eve, darlins! 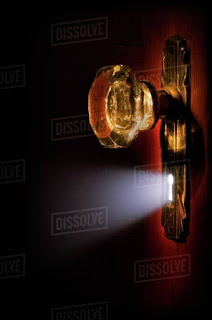 Once Anton was within five feet of the door, it snapped shut. Damn it! A closed door was as good as a locked one, or so he’d been told. And yet…the curiosity was there, inside whoever was behind this door. The interest was present, he just had to make himself affable enough to put up with in exchange for news.

“Excuse me,” he called out, carefully modulating his voice to keep from alarming the rest of the party as they headed down the hall, but loud enough to ensure it go through the door. “I just happened to notice you observing us. Are you presenting later on today?” He tried to inject a little warmth into his tone. “I’m afraid if you are, I’m already lost. Theoretical thaumaturgical symbology this complex is lost on me. I’m a very practical practitioner, at heart. Indeed, most of my work is done on behalf of the dead, so there’s little chance of hurting someone if I write the wrong symbol or use an incorrect blend of herbs.”

The door didn’t quite crack, but Anton could see the handle move. “The dead?” a voice called out from within. It was a faint voice, but enough to give him hope.

“What use do the dead have for thaumaturgy?”

“It’s a bit of a rare subspecialty. I’d love to talk with you about it.” Anton waited, patient, and watched the handle bob in its hold. Wiggle, wiggle…wiggle… “I’d love to hear more about what you do as well,” he tried, and—aha! The door opened.

“Absolutely,” Anton assured the man—he was sure it was a man now, for all that he could barely see the person inside. That voice was too deep to belong to a lady.

That was a good question. Because my mentor told me to spy on everyone here in whatever way I could, and this seems a good start. But he didn’t want to start a new acquaintanceship with lies, no matter how easy it might be. The truth was…

“I’ve led a rather sheltered life over the past few years,” Anton said, and in a way that was still true, despite the debacle with Montgomery and his ilk. “Almost everything I’ve done has been very…focused on one subject, and one subject only. I’m interested in learning more about what other people are working on, people who don’t expect me to interrogate them to determine a grade. You’re working in one of the most influential laboratories in the entire world, which means you must be an exceptional thaumaturge. That in and of itself is enough to intrigue me.” He tilted his head and smiled. “Please, don’t speak of anything you don’t wish to. I’m just interested in what you might want to share, that’s all.”

The door opened wide enough to admit Anton a moment later. He wasn’t admitted, though—the man within came out to meet him, closing the door behind himself. He was about Anton’s height, but skinnier—his robe hung off his collarbones like they were coat hangers, and his pale red hair had a look about it that spoke of not being washed in an inadvisably long time. His fingers seemed abnormally long, clutching the ends of his sleeves and tucking them in toward his center, which emphasized the hunch of his shoulders. He smelled of metal and smoke, in a completely different way than the engineering shop had, but it was still notable.

“I’m Anton Seiber, Master of Thaumaurgy from the University of Zurich.” Anton reached out his hand. The young man shook it carefully, as though he wasn’t really sure that was what you were supposed to do.

Did he not remember his own name? “Pleased to meet you, Hrym.”

“Do you really want to see my work?”

“Will you tell me how you use thaumaturgy on corpses?”

“Absolutely.” None of it was classified, after all. Except, perhaps, for Anton’s latest spell…but that had no sort of value in a place like this, a place dedicated to war. Camille had been overconcerned, when he told Anton to be cautious.

“I can’t let you into my laboratory.” Anton felt disappointed, but Hrym went on, “I’ve got experiments on every flat surface, it’s impossible to move in there without knocking into one of them. Byron says I’ve got to be more judicious about how I work, but I just think I need a bigger room.”

Byron? Oh—Lord Atwood. They’re on a first-name basis? “That’s all right. What else can you show me?”

He led Anton over to the nearest window, looking out into the courtyard. “I did some of the work on that,” he said, pointing at the airship that was still floating peaceably in the center of the compound.

“Oh? Was it concerning propulsion, by any chance?” Hrym must be the colleague in charge of the colloquium later, although Anton was a bit surprised that he had the nerves for public speaking.

“No,” Hrym said, startling him. “Propulsion is the easy part. My bit came in figuring out how to keep the warring energies within the engine and propulsion spells from tearing the people who fly it. That much magic and technology working together is very difficult to balance.”

“Shielding,” Anton said, understanding and slightly awed all at once. “Mobile, changeable shielding depending on who enters the ship.”

That was certainly challenging symbology. It was the mobility of it that made it the work of an expert—the spells had to adjust to constantly varying loads of people and goods, while maintaining a balance between the other spells and keeping them from interfering with each other. “That’s fascinating.”

Hrym ducked his head. “Thank you.”

“Does your work apply to the tanks as well?”

“Not yet.” He changed the subject before Anton could dig deeper. “What use is thaumaturgy to the dead?”

“I learned to use it as a means of providing identification,” Anton said. “And occasionally helping to determine how a person has died.”

“In cases of murder, then?”

“Tell me about that.”

“Why do you want to know?” Anton asked, then backtracked a bit. “I mean, I’m certainly not averse to telling you, I’m just…surprised you want to know about it, I suppose. It’s rather basic thaumaturgy at heart, nothing like what you do.”

“It’s interesting,” Hrym said, and his ice-blue eyes were bright with that strange curiosity. “I’ve never seen a dead body, after all.”

Never…seen…what? “How have you avoided that fate?” Anton asked as lightly as he could.

“I’ve been here ever since I was a very small child. A few people have passed away over the years, but I’ve never seen their corpses myself. Most of us haven’t, I think.” He looked intrigued. “How long before dead people start to smell?”

It appeared that as sheltered as Anton had considered himself over the past few years, he had nothing on Hrym. What on earth was going on here?
Posted by Cari Z at 11:30 AM