Notes: We have our central cast assembled, now let's meet some supporting characters. I think we're about at the halfway point on this story--it's going to be longer than the other ones in the series by quite a margin. 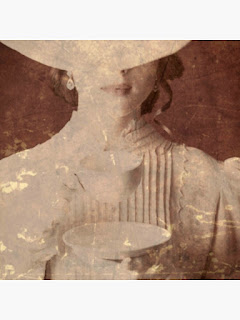 The tour was easily found—one of the innocuous, vaguely disapproving staff approached them as soon as they left Dr. Grable’s rooms and escorted them to the dining hall, where, they were coolly informed, “the rest of your party awaits.”

Anton understood that the insinuation had to do with them being inconvenient for everyone else, but he was willing to let it slide. Dr. Grable, however, was used to being attended to by a staff who kept their opinions to themselves, for fear of bringing his wrath and extra duties down on them. He wouldn’t take it at the university, and he wasn’t about to take it here. The dressing down was short and ferociously blunt, culminating with “—as I’ve just had my damn leg tended to by your in-house witch doctor, I believe I’ve more than enough reasons to force a little wait on my behalf, and I don’t care if you agree with me or not, man, try that attitude to my face again and you might find a frog staring back at you in a mirror one day.”

Their escort went silent after that, bowed a bit lower and kept more distance, and Dr. Grable looked up at Anton and murmured, “And now I’ll be roundly despised by the staff, who will have more sympathy for you if you take care to look a bit beleaguered.” Anton took that as a stage direction, and attempted to make himself appear more hangdog than he already felt as they entered the dining hall.

But this was…not a hall. This was an elegant oak table that seated perhaps twenty, not a place where the staff and soldiers and scientists and whoever else came to eat. The long, shining expanse of wood was covered with trays of thinly-sliced meat and cheese, bowls of fruit, platters of bread and jam and mounds of beautiful white butter carved into elegant shapes, silver pots of coffee and tea, juice and water with actual ice cubes sparkling in it. There was also a small stack of empty plates, indicating that the others in the room had, in fact, eaten.

Lord Jourdain stood quietly talking with Cardinal Proulx over matched cups of coffee by the largest windows. Caroline was sitting in a little gaggle of women at a side table, both high-ranking servants from the look of things, their stern miens softened by her engaging manner and the pretty picture she made in her sky-blue dress. She looked over at Anton as he and Dr. Grable entered, but had the sense only to briefly smile rather than being more engaging. Monsieur Deschamps paced by the fireplace, looking from one little nexus of conversation to the other as though he knew how odd it was for him to be isolated so, but couldn’t do anything about it.

Camille was nowhere to be seen. That bothered Anton more than he wanted to admit.

Lord Jourdain was the first to break off and join them, his new robes nearly indistinguishable from what he wore to greet them yesterday, grey-streaked hair pulled back in a neat tail. “Gentlemen, welcome. I trust you both slept well?”

“The sleeping went well enough, but your doctor is an unstoppable force when she has something on her mind,” Dr. Grable said with a grunt, waving Anton toward the nearest teapot. He served himself, stretching for the cup with a grimace but scowling warningly when Anton moved to assist him.

“Yes, Dr. Wictoryn is quite excellent at her work, isn’t she?”

Dr. Grable inclined his head. “She is indeed, sir.”

“I’m pleased you think well of her capabilities. Her preferred focus is research, of course, this being a research institute, but one of the caveats of the position of a medical researcher was that she be on hand to deal with any injuries that crop up among the staff or guests.”

That would be a first if it were true, Anton muttered in his own head.

“While you two gentlemen help yourself to breakfast, allow me to begin my explanations of the grounds and those areas permissible for visitors to frequent.” Lord Jourdain looked around the room. “You might have noticed that the Institute is built like a keyhole, with three substantial buildings linked in a U-shape and a gate and guard towers closing that U up. We are currently in the central building, which is dedicated to administrative matters, including the feeding and housing of our guests and staff. The building to the north,” he waved to the side with his left hand, “is where our thaumaturges do the majority of their work. The central hall is open to you, as well as the meeting rooms and learning laboratories, but if you encounter a locked door, you must not try to force it. Intrusion into private research matters of the Empire will result in a swift reckoning.

“The south building,” he continued as if he hadn’t just promised a long drop and a quick stop to anyone who stuck their nose where it didn’t belong, “is dedicated to our engineers, where the laboratories are much larger and less individualistic. You may view them from a walkway accessible on the second floor, but if they are covered, you are not to look further. You are not under any circumstances allowed to be on the ground floor in those laboratories unless accompanied by myself or another qualified engineer. This is for your own safety, and disregarding this rule could result in a very painful accident.” He folded his hands together and looked around the room. “Are there any questions at this juncture?”

“This is all so exciting!” Caroline said, clasping her hands together and batting her eyelashes a bit. “If I may ask, do you have any women thaumaturges or engineers on staff?”

“Several of each, Lady Cuthbert.”

“How delightful! I would so like to meet them. The thought of bringing word of France’s great social progress in acknowledging all that women have to offer back to England absolutely thrills me.”

Lord Jourdain smiled indulgently, and Anton almost reeled from how smoothly Caroline had just stitched herself into the fabric of the place. Lord, if she were actually a diplomat she would be unstoppable. “That can certainly be arranged, my lady. Anything else?”

“His brother has been contacted and is on his way,” Lord Jourdain said. “It is a journey of several days, and he is insisting that his brother be interred on their ancestral grounds.” His voice went a bit flatter. “Among other things. Undoubtedly he’ll wish to speak with you, to ensure that the last rites were performed as well as could be expected under the circumstances.”

“Of course, of course.” The cardinal inclined his head. “I would be very pleased to meet with the new vicomte.”

“He will be, won’t he?” Lord Jourdain’s eyes sharpened a bit, but nothing else about him indicated undue interest in the incoming Voclain. “Is there anything else?” He looked around the room. Anton did his best to hold still under the scrutiny, while Monsieur Deschamps was fidgeting so hard he was his own odd little orchestra.

“In that case, I ask that you please follow me to the Engineering wing of the Institute.”
Posted by Cari Z at 11:26 AM