Notes: Ta-daaa! A new part to the story, a little more about Cas's past, and some uncomfortable revelations for everyone. 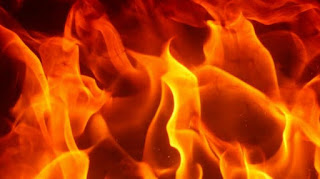 Flames licked their way through the apartment, spreading along the walls like a quick-moving rash. Cas turned back to the door, but he already knew it was hopeless. It had been completely consumed—but these were supposed to be flame-retardant materials. Why were they so susceptible to this fire, then?

Because Christala had planned it that way. Whether it was driven by chemicals or by a biological compound or somehow by her own spiteful love of destruction, this fire was a force that Cas couldn’t fight. His best option was to flee, then.

He ran into the next room of the apartment, where there was window that he could still get at. He tugged at it, checking for locks—nothing, but it didn’t budge. He smashed a stool against it next, hammering with phage-increased strength, but it still refused to yield. She’d sealed it somehow, closed it permanently—of course she had. She’d known he would come and investigate, and this was all part of the trap.

He couldn’t use the door or windows to get out, and there were no other exits he could see—no large ventilation or piping. It was time to use his last, and least favorite, option then—waiting it out. Cas stumbled, coughing, into the bathroom adjacent to the bed, and prayed that the water still ran in here even if the fire suppression system was cut off. A single slap of his hand woke the AI, and a moment later cold water began to fall from a cheap half-ceiling unit to the low ceramic tub beneath it.

His heart pounding, Cas soaked the single small tower he found in the pouring water, then wrapped it around his head. He braced against the wall and kicked at the old-fashioned tank toilet until it dislodged, pouring more water across the floor toward the shut door, which was already browning at the edges. He stayed low to the ground, pulling as much of his body into the spray of the water as possible, and settled in to do the thing he hated most of all—relying on someone else to save him.

Cas stared at the door, willing it to open, to reveal anything other than fire. This couldn’t be the end. Dying ignobly in Christala’s fucking bathroom, driven there like an eel farmer drove their crops out of their holes and into buckets…this couldn’t be the end of his story. He had risked so much, he had already lost so much, and there was so much more that he didn’t want to lose…
I want to stay with them. He barely knew them, his family, but he wanted to go back to them. He
wanted to coax a smile out of Shar and teach Lilah how to make a spoon disappear. He wanted to see his husband and hold him and tell him how sorry he was that he wasn’t who or what he should be. He wanted his brother.

Cas coughed, and wrapped the cloth more securely around his mouth and nose as smoke began to infiltrate the room. He didn’t want to think about Beren, but how could he not, at a time like this?

“Don’t worry about me.” It had been so hard to breathe, to force air through his abused lungs. Cas had been pretty sure he was dying back then. If only. “Find a safe place and wait it out—Imperians are coming, they’ll break it up.”

“I’m not going anywhere without you!”

Except that hadn’t been right, because he’d had his life, then. By the time Cas found him, nearly a week later, little better than a walking corpse himself, his brother had been dead for days. His flesh had already become soft, discolored—and his eyes had been missing. So was his throat.

It hurt to weep when you were burned inside and out, crisped by superheated air after being too close to an explosion. His phage had been overworked, devastated just keeping him alive, and if he’d been as good as his instructor always hoped he would be, Cas would have compartmentalized, pushing the horror of his brother’s death into the back of his mind until he was recovered enough to feel it without making himself worse. But he wasn’t that good. He’d broken down, wept so hard he passed out, and it had been hours before he, to his dismay, woke up again.

His new family wasn’t really his, not to keep, but Cas needed to see them again. He needed to explain…he needed to…

The shower stopped working, overwhelmed by the fire. The door was gone, and so was most of the wall, and the fire was inches away from eating him alive, and Case shut his eyes and thought of Beren.

Instead of being enveloped by burning flames, though, instead he was suddenly plastered with a strange, cooling foam. It enveloped him completely, turning him into a sort of gelatinous grub. Cas couldn’t see through it—he could barely even move—but he felt a pair of stiff, robotic arms gather him up off the floor, and heard the humming of its machinery as it carried him out of the ruined apartment, safely coddled in his strange cocoon.

He heard human voices, then a crackle, and a moment later the goo melted off of him, practically evaporating. Cas was lying in an emergency medical transport, from the look of the equipment surrounding him. “Sir! Sir, are you all right?” A medic sat beside him, his eyes wide. “It’s going to be fine, you don’t have to talk yet. Just lie right there, I’ll check you over for damage.”

Cas figured he must look pretty bad if the guy didn’t expect him to talk. He felt all right, though—more than a little singed, and he’d inhaled too much smoke despite his best efforts, but the phage was working on that. He didn’t have any of his disguises anymore, and he didn’t care. “Everyone—else—okay?” he managed to choke out.

The young medic’s eyes went even wider. “Oh no, were there other people in the apartment with you? Dalon!” He left the transport and ran toward another cluster of people—firefighters and more emergency personnel.

Now was Cas’s chance. As reluctant as he was to move, he forced himself to his feet, grabbing one of the emergency blankets and wrapping it around himself as he slid out of the transport and away from the apartment complex. He needed to be deep in the shadows before the young man noticed he was missing.

He needed to get home.

They searched for him, he could hear it, but Cas knew how to hide even when he couldn’t use the phage. He walked, barefoot, shrinking down the alleys like a wraith, picking his way across the city back toward Rone’s palace. There was no chance he would make it within his deadline, he knew that. Rone might think he was dead, or he might have people out searching the streets for him now, to bring him in to face a prince’s justice. Rone might not know anything at all, other than that his husband was gone.

Whatever happened to Cas afterward, at least he would be able to tell Rone the truth to his face.

By the time he reached the tunnel, it was almost dawn, and his feet were bloody. His lungs were better, at least. Cas limped wearily toward Lilah’s room, wondering if he’d be able to sneak in. Would it even matter?

Had Rone even noticed he was gone?

There was his shriveled bit of skin, still doggedly hanging onto his implant. He reabsorbed it with effort, then gathered up his clothes and opened the door beyond. He crept inside, and—

Lilah wasn’t there, but neither were Rone’s soldiers. It was just Rone, holding a gun on him as he stared at him, hard-eyed. “Where is Beren?” he demanded.