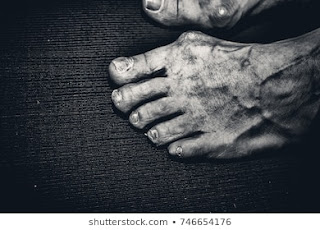 Cas laughed, softly at first, then so hard he knew he must have sounded like maniac. He doubled over at the waist, fell into a crouch and locked his arms around his knees, laughing the whole time. He was practically naked, he was burned and blistered, he could hardly breathe, he was exhausted and so was his phage, and he’d just revealed his true identity to Rone. He should be paralyzed with fear, afraid for his very life.

No energy left for fear. Why bother? Either he kills me or I get to explain. Maybe both. Explaining was vital, though—explaining might save Rone’s life. Cas lifted his head and tried to catch his breath, tried to speak, but it was too much. His body was betraying him now, his lungs weren’t having it any longer. They seized inside his chest, and suddenly it was all Cas could do to not to pass out.

“Fuck.” A second later, a pair of strong arms stretched him out of his tight, constricted crouch. Rone maneuvered Cas onto his knees and pulled his head onto his shoulder, gently patting his bare back and kindly avoiding the places that were still raw. “In and out, there you go. Calm down. Just calm down.”

“Sure you are,” Rone agreed. “So calm that you can speak to me in full sentences. But—oh wait, no you’re not. And until you are, I’m not letting go.”

Shit. Cas absolutely hated Rone sometimes, hated how goddamn understanding he could be. Cas was a murderer, an imposter, someone who had done nothing but lie to Rone in order to accomplish his own ends. And now the man was trying to comfort him? “Fuck…you…”

“Better. You get that out without the pause and I’ll believe that you’re well enough for me to start yelling at you.”

Cas flinched, and loathed himself for it. It was the least of what he deserved, but he still hated to think about the hurt he’d caused this man.

Rone sighed, then stood and picked Cas up in one smooth motion. “We’re not going to do this on the floor of my daughter’s bedroom. Come on.” He took Cas out into the living room and carefully deposited him on the obscenely comfortable couch. Cas retracted into himself again, not wanting to soil it any more than he had to with his filth-covered body, but Rone just grabbed his feet and pulled until he stretched out. He sat down on the low table across from the couch and put his elbows on his knees. He looked at Cas, the purple sheen in his eyes brightening a bit.

“The kids are safe, the house is secure, and I’ve temporarily disabled the AI in the living quarters. If you can bring yourself to tell me the truth about you, now’s the time.”

The truth. Ha, right, no problem. Cas sighed. “All right. The first thing you should know about me is that I’m—I’m not Beren Farling.”

He waited for Rone to start yelling at him. Instead he nodded his head slowly. “Yeah, that part I can see. But you are Beren too, aren’t you? It took me a moment, but as soon as you hunkered down in there I could tell. Your body is the same as his, you move the same way. It’s just the face that’s different.” He tilted his head in consideration. “You’re the brother? The one with the phage?”

Cas gaped. “Are you a fucking psychic?”

“Far from it. I just…I knew there was something off with you. Something too calculating for you to be who you said you were. And the things you can do, the things you survived?” He shook his head. “Once might have been a coincidence. The incident with the eaters, I could let that go. But then, surviving the attack on the ship? Retrieving my children during a riot? Fooling our doctors into believing that you were who you said you were? No. Although,” he added with a small half-smile, “some of that was my doing.”

“Your—” The power outage. The wonderfully convenient power outage during Cas’s last appointment with Dr. Weiss, the one that had allowed him to get information on Dani Yorque. “You engineered that? Why?”

“I wanted to see what you would do with the extra latitude,” Rone said somberly. “I saw video of you defending my children outside the arcade. I felt that you wouldn’t cause them any harm, and I wanted to know what your plan was. Of course, that was when I thought you were really Beren,” he added. “Where is he, back on Leelinge? Why are you pretending to be him?”

“Beren is dead.” It hurt to think and hurt even more to say out loud. Rone was the one to wince this  time, like Cas’s revelation had caused him true pain. He thought back to their relatively few nights together, the tenderness he’d shown this shell, the solicitousness. Rone had liked Beren. “He died during the revolution. He was betrayed by someone like me.” Cas indicated himself with one trembling hand. “You were right about me. When I’m not completely burned out, I possess the ability to change myself to imitate others, right down to my cells. I’m a phage.” He swallowed hard. “I’m Beren’s older brother, Cas. And I’m looking for the person who killed him.”

Rone let his head drop for a moment. He sighed and ran a hand down his face, staring at the floor. It took Cas a second to realize that he’d just effectively destroyed Rone’s husband. The person he thought he was bringing into his life, into his family, wasn’t real. He’d been dead before they’d ever met. All he was left with was Cas, the pallid, trembling truth behind the imitation. He felt so ashamed, he wished for a moment that he could be back in Christala’s burning apartment, this time without a robot firefighter there to save him at the last minute. If he had burned to death, it would have tainted Beren’s memory but not wholly destroyed it for Rone.

“I’m sorry,” Cas choked out. “I’m so sorry, I hated to lie to you but I had no other way to get off-planet. If I’d stayed on Leelinge, they’d have found me and killed me. I needed to come after his killer, and she was already on her way to Imperia. Please,” he begged, “you can imprison me, you can send me back or kill me, do whatever you have to, but let me take her out first. It’s not just about Beren anymore. Everyone you know is in danger from Christala. She was behind the attack on the ship, she can separate pieces of her phage and make people into her puppets, she—I don’t know what she wants here, but she’s already killed both of our people to get it.

Now she’s worked her way into the king’s inner circle,” he babbled. Cas knew this probably seemed far-fetched, but he needed to get it all out before Rone put him in prison. He had to try. “I know she’s imitating someone close to him, but I don’t know who yet. Let me work it out, let me find her, and then you can do whatever you need to to me. Let me keep your family safe, Rone, please.”

He stared at Cas, and Cas stared right back, trembling but unwilling to back down. He couldn’t. He needed to see this through, for both their sakes.