Notes: Some Jonah POV for you. Omigosh, don't hurt me. 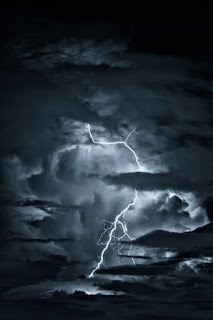 Jonah winced as he heard his ship’s thrusters whine indignantly and wondered, for not the first time, why he was doing this. “Ease up on the throttle, Lacey. You’re gonna rattle us right apart at this rate.”


Lacey scowled from where she sat in the copilot’s seat. It wasn’t all that different from her expression when they’d lifted off an hour ago, honestly. “It’s this storm, it keeps screwing with me. I thought this thing had stabilizers?”


“It does, but you have to practice things the hard way too,” he reminded her. “You’ll be tested on whether or not you can fly one of these ships without stabilizers to help you. Eventually I’ll shut off one of the engines too—” he shut his eyes briefly as the ship jumped and almost spun out on an updraft for the tenth time in two minutes, “—but not today,” he finished. “C’mon, you’re better with this class of ship than you think. Just handle the controls like you did in the simulation.”


“But this isn’t a simulation!”


“No, which is why you’ve got to—proximity alert, Lacey, we’re getting too close to the heart of the storm.” The ship was built to withstand lightning strikes, but the manufacturers hadn’t imagined how bad storms could be on Pandora. “Get us some altitude.” She grunted and leaned into the throttle. It wasn’t easy, but the ship gradually veered away from the hurricane that was whipping across the edge of the ocean as she set them on a higher course a bit closer to land. “Now can I use the stabilizers?” she asked around gritted teeth.


Jonah checked their position. “Turn the autopilot on.”


“I don’t need the autopilot!”


“You need a break, honey. Turn the autopilot on for a minute, okay?”


“Fine.” Lacey pracically slammed the lever into auto mode. Instantly the ship’s course steadied. Jonah set them to flying in easy circles, then turned toward his son’s childhood best friend.


“I don’t know what you’re talking about.” She didn’t meet his eyes, though, staring sullenly out at the lashing rain that beat across the viewscreen. It didn’t obscure the holographic projection of their course, but it sure made things dark in the cockpit.


“I’m talking about you jerking around on those controls like you’re trying to hold onto a catterpet’s tail. You’ve flown one of these before, Lacey, and I’m right here with you. You don’t have to be nervous.”


“Then what are you?” No response. Jonah suddenly felt tired. “Fine. You want to keep it to yourself, that’s your right, but I’m not going to let you take your mood out on my ship. We’re heading back to the Box.”


“My dad is leaving today, all right?” She blurted it out like it had been suffocating her. “He took a contract to fly for one of the syndicates. He’s going to command staff aboard a cruise liner in the Central System.”


Jonah was dumbfounded. “What about Ellie and the other kids?”


Lacey’s eyes went flinty. “He’s taking them with him, of course. Why not? They’re his normal family. He doesn’t have to worry about them having an asthma attack or getting the Ceylan Flu. I asked if I could go with him, but he said I was an adult now and I needed to learn to make my own way in the ‘verse.” Her hands clenched into fists. “That’s why I have to learn to pilot one of these. How else will I ever get off of Pandora?” She looked away, but not before Jonah saw her eyes fill with tears.


“Nothing ever happens here! Cody gets to do everything, he gets to go to the Academy and visit Perelan and his whole life is so exciting, and I’m stuck here doing nothing except being given shots!”


“Y’know, not all of that excitement was good for Cody,” Jonah pointed out. Lacey waved his cautions away with the blithe dismissal of an immortal teenager.


“Yeah, but he got through it all fine. And Krystal left six months ago, and Jo’ El is going to work as a miner. A miner! He got a job on a mining ship, even though he’s a natural! Why can’t I do that? I want to go somewhere. I want to do something with myself. And I’m going to do it without my fucking father’s help.”


“Lacey.” Jonah set a hand on her shoulder. “You know he loves you. I’m sure he just wants the best for you.”


Her face crumpled. “No he doesn’t.” Before he could react, she’d unbuckled her harness and flung herself into his lap, pressing her face to his shoulder.


Jonah sighed and patted her back. “Aw, honey.”


“I knew he’d never take me with him.” Her words were muffled, but he could make them out. “He brought me here just to leave me, he only waited until I was old enough to be on my own and now he’s going back to his life in the Central System. He doesn’t care, and I don’t want to be here anymore!”


“Well…” Hell, Garrett was going to kill him for this. “You could always come back with me.”


“Sure. If you get your pilot’s certification, that is. You could help me run supplies between here and Olympus. Garrett can walk you through getting the permits for it.”


Lacey pulled back and looked at him. “Are you sure it’s okay?”


“Not completely,” Jonah said. He had to be honest. “But we can talk to Garrett about it when we get back. I’m supposed to comm him in an hour.”


“Nah, we’ve still got some—” The proximity alert suddenly shattered the relative silence, screaming at full volume. Lacey jumped back and Jonah reached for the controls, checking the computer. “What the hell?” The ship rocked as something blasted past it. Lightning? But they were well away from the center of the storm. “Buckle in!” he shouted at her as he took over flying. “Computer, identify projectile!” Maybe something had gotten swept up in the hurricane, maybe it was a really large chunk of ice—


“Like lightning?” Lacey asked as she strapped herself back into her seat, face pale.


Jonah shook his head grimly. The computer knew how to differentiate between natural and man-made strikes. “No, that was a plasma weapon. Somethin’s shooting at us.”


The proximity alert picked up again. Jonah made a split-second decision and hauled back on the thrusters while cutting power down to the engines by ninety percent. The ship rolled onto its end, torpedoing down toward the roiling ocean beneath them faster than the g-shield could adjust for. The next burst of plasma fire missed as well, but Jonah couldn’t count on the storm to keep helping them and hindering whoever was attacking them. They needed to get back to the Box.


“It might be the storm,” Jonah said. He didn’t articulate what else it might be. If something was firing on them in the middle of a fucking hurricane, then it was likely that Pandora City was under attack.


“Lacey—shit!” Jonah ripped the ship to the right, not quite far enough to avoid the next blast. It grazed the belly of the ship, and the sudden blare of security alarms almost drowned out the wailing proximity alert. Jonah grimly checked the controls. Well, there went their landing gear. “I’ve gotta put us down.” He could see the edge of the cliffs that protected the colony from the worst of the weather.


“Put us down where?” she demanded. “There’s no protection out here from the storms! We’ll be swept off the rocks into the ocean as soon as the hurricane hits the coast.”


“Either we take our chances on land or we get blown to pieces in the air!” Jonah diverted the power to all non-critical functions and boosted the excess to the thrusters. This was going to be hell on the engines.


He increased their speed by seventy-five percent, losing most of their maneuverability in the process. The cliffs were coming up fast, but the proximity alert was starting to pick up speed again. Their angle of potential descent was so narrow… a lot depended on whether or not the bottm of the ship would be able to handle the impact. The thrusters could help there, but only as long as Jonah didn’t blow them out during their mad dash toward the lesser evil. Three kilometers. Two. One…


A flare of energy crackled across the viewscreen, killing the computer. The ship wavered, but managed to maintain its altitude. Only now, Jonah couldn’t actually see any of the projections that had filled his vision a moment ago. The last plasma strike had taken out all the automatic functions.


“God motherfucking damn it all to deep space hell,” he muttered. “Okay. Brace yourself, Lacey, this is gonna be rough.”


She was staring blank-faced at the dark screen. “I can’t see the ground.”


“Well, you’re gonna be feeling it any second, so get ready for—”


The impact snapped Jonah into his harness so hard he felt two ribs break. Blood filled his eyes, gushed from his nose. White light turned to red, which quickly faded to black.


Jonah passed out before the ship finished rolling.
Posted by Cari Z at 9:59 AM