The Train: Chapter Three, Part One

Notes: Back and getting my shit together again! Enjoy your introduction to our new protagonist, and don't worry--we'll get back to the action soon :) 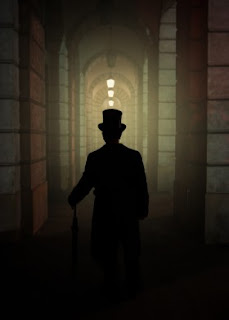 Anton was briefly tempted to plead ignorance, but the insistence prick of the blade at his back warned him against it. He was already made. There was no sense in pretending any longer. At least, not to this man in particular. That didn’t mean he was finished, though. He simply had to make the man see reason, and to do that, Anton needed to satisfy his curiosity.


And so, in line with his better judgement but hardly easier because of that, he spoke the truth. “My name is Anton Seiber. I’m a journeyman thaumaturge from England traveling to Zürich for the new term, to study at the university there. My business on this train is simple necessity, no more. It’s my only way of getting to Zürich on time.”


The knife didn’t go away, but neither did it penetrate further. Anton decided to consider that with cautious optimism while he waited for Lord Lumière to speak further.


“What happened to the actual Consul Hasler?”


“Ah.” The desire to prevaricate was so strong that Anton had to bite his lip for a moment. “When I found him he was…inconvenienced. I meant to offer him help, and things got rather out of hand after that.”


“That is true, although not for the reasons you think,” the man said cryptically. “But I believe I’d rather have my curiosity satisfied first. What happened when you found Consul Hasler?”


Anton took a deep breath. “He was ill,” he began. “At first I meant only to offer him my assistance. After I ascertained that he was in possession of a ticket for this train, I…I felt that since he clearly was unfit to carry out his duties, that I would…endeavor to carry them out for him.”


A low chuckle curled through the space between them, its timbre so resonant that Anton could almost feel it against the skin on the back of his neck. “That is the most honorable interpretation of a mugging that I have ever heard.”


“I did not mug that man,” Anton snapped. “I was the victim of a mugging not two hours before I met him; I know what that feels like. He wouldn’t even let me lead him over to a place to sit down before he tried to kill me.” The pressure of the blade suddenly dug in sharper, and Anton’s spine stiffened so quickly he thought it might snap.


“I haven’t the faintest idea!” The attack bothered Anton more than he felt it should, considering what had become of the late Consul Hasler. But while Anton might, just might, have the makings of a thief and a liar lurking in the depths of his heart, he was no killer. The idea that he had done something, with his few words and simple attentions, to make this person try to dispatch him was incredibly unnerving.


“Perhaps because he was a murderous fiend equipped with a magical knife?” Anton continued recklessly. His hands were shaking, but he couldn’t settle enough to stop them. “A magical knife which killed him, I might add. He lunged for me and missed and fell on his own knife, and that it God’s own truth, I swear it. I did not kill him. I don’t have the temperament for that sort of thing, although,” he sighed now. “This is the third time today someone has pulled a knife on me, so perhaps I attract such people.”


Astonishingly, this seemed to be enough to somehow exonerate him in Lord Lumière’s eyes; at least enough that the sharp point vanished. “You have, indeed, had a most trying day,” the man said. “Do turn around, Mr. Seiber. I doubt I’m going to have to ‘dispatch’ you at this point. We might as well be a bit more comfortable while we continue our discussion. Perhaps you should take something for that headache of yours?” Lord Lumière’s hands were empty as he stepped around Anton and over to his bunk, where he began to pull off his thin leather gloves.


Anton stared at his cabin mate and erstwhile assailant, aware that he was gaping but unable to quite stop. “How do you know I have a headache?”


“Oh, the line between your brows, the way you hold your shoulders, the color of your lips.” Lord Lumière shrugged. “Also, I do recall your moment of indisposition outside the platform earlier today. It stands to reason that you would still be feeling a bit…” He considered for a moment. “Fragile.”


If Anton’s head had felt less like an egg with cracks all through its shell, he would have objected to that term. As it was, he had bigger things to consider. “That—that was you, the man who ran into me. I thought I recognized your voice!”


“My apology was meant most sincerely,” Lord Lumière said, a faint smile appearing on his thin lips. “In my defense, I was in quite a hurry.”


“Because I had a train to catch.” He took off his top hat and sat gracefully at the edge of his bed. “I had also just rendered a murderous fiend unfit for his work, and I wished to distance myself from him as quickly as possible.”


Anton frowned. “How did you know what Consul Hasler’s intentions were? Are you an investigator?”


“Of sorts. I’m a Lumière, after all.” He paused, as if waiting for Anton to comment. Clearly there was something he was missing here, some thread he hadn’t caught.


“I’d have thought you’d know, given your remarkable facility with languages. Or is your device not translating the title correctly?”


Was it possible to be more dumbstruck than he already was? Anton felt as though he were teetering on the edge of a massive crevice, and one more revelation would send him reeling into a place where even the brightest light wouldn’t be able to drag him out again. “How do you know about the Device?” he asked as calmly as possible.


“I knew from the moment I first heard you speak.” Lord Lumière’s voice was unaccountably gentle. “You have a slight lisp that you’re doing nothing to compensate for, the result of an unfamiliar weight against your hard palate. You wear a single earring, not exactly the fashion for anyone not a sailor. Not to mention, your accent is wholly English despite your facility with French, which no one would advertise in Paris unless they had no other choice. That coupled with your obvious heritage, not to mention the challenge you faced by someone speaking in a language with which you were unfamiliar, could only lead to one conclusion.”


“But there is only one such Device! How would you know to expect it?”


“There is more than one way to make a translation device. Your father’s research has been shared around the civilized world by this point,” Lord Lumière explained, and Anton shut his eyes for a moment. “It’s kept very quiet, of course, patent laws being what they are. But yours is the original, isn’t it?”


“It isn’t obvious,” the other man added, an unexpected effort to comfort that Anton appreciated. “Only to someone who’s seen such things before.”


Anton opened his eyes and made an effort to return his focus to the present. He couldn’t think about his father right now, or the fate of his monumental efforts in thaumaturgy, so much genius distilled into…no, he would not think of it now. “You’ve seen such things before? Where? How?”


“I’ve seen much in the course of my duties.”


“Which are what?” Anton demanded. “What is a Lumière? What are you?”


“Lumières are servants of the Emperor, extensions of his will. We shine lights on the dark parts of the empire, those places that many would prefer to leave unrevealed. I work to ensure the sovereignty of our leader and the health of our empire. At times, that means working as an investigator to uncover plotters and malcontents.”


The man spread his hands. “What more are you expecting?”


“Magic,” Anton said flatly. “You must be very adept at magic, to recognize my Device. A master thaumaturge, I expect.”


Lord Lumière shook his head. “Not at all. I can’t even work the simplest fire spell.”


Wait… “But you made Consul Hasler sick…”


“That was the result of a fast-acting emetic, not magic.”


“But—” Anton waved a hand at him. “You’re wearing some sort of obfuscation device, or a spell, or something. You’re terribly hard to focus on, and I saw other people look right past you as though you weren’t there.”


“I’ll explain later, if it becomes relevant. For now, you need to tell me how you plan to continue your charade as Consul Hasler, and why I should help you do it.”


And they were back to negotiations. Good, Anton could work with that. “Well, clearly your work isn’t done, even though you got Consul Hasler out of the way. Therefore you’re expecting something to happen on this train between now and Lucerne. I’m experienced in all basic forensic thaumaturgy spells, and I’m adept at adapting them to new situations. If you don’t do magic, as you say, then I might be helpful if a situation arises where you need a thaumaturge’s expertise.”


“It’s less disruptive for everyone to continue thinking of me as Consul Hasler, so as to prevent them from changing their plans if, in fact, someone is plotting to commit a crime aboard the train. Why risk it?”


“Exactly. Also…” Anton didn’t think this man would be moved by compassion, but it didn’t hurt to try. “If I don’t make it to the university by the start of the term, I will lose my scholarship and my position there. This is, in fact, my only chance.”


They stared at each other in silence for a moment, Lord Lumière considering, Anton strangely breathless. At last the man said, “You argue well in your favor. I accept your terms.”


Anton scarcely had a chance to feel relieved before the man stood and loomed over him.