Okay, so technically I've got a new release today. I mean, today's the day its supposed to be available. Due to personal issues, the press hasn't been able to get everything together, so right now it's still up for pre-order and may not be available for download until the end of the weekend. But! Pre-order means that it's cheaper to purchase, so there's that.

Also, I really liked the theme, which is basically sexy priests. I didn't quite use a priest in my story, but he's close! And he's hanging out with bad company.

Let me tell you more:

Tyson may be the Son of a Preacher Man, but he's certainly no saint. Exorcising demons is taxing work, and his partner, Seb, certainly knows how to relieve the tension. Their latest assignment seems ordinary enough, but Seb's connection to this particular hellspawn means Ty might have to strike a deal, and the terms will be questionable at best.


That's the website blurb. Additionally, it's a spin-off of the Cambion universe, so there is mention of Rio and Devon if you're a fan of those guys.  Want an excerpt? I feel you should have an excerpt. And here's the link to the pre-order, if you're interested. There are also stories by Angelia Sparrow, DK Jernigan, Ann Anderson and Annabeth Leong, it's a pretty decent lineup. 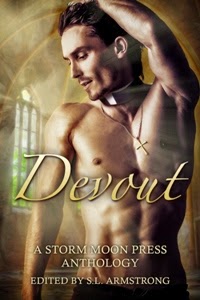 
I wasn’t about to walk into an exorcism smelling like come.  I took five minutes to be as thorough as I could stand to be with the water, which never managed to get more than lukewarm, and some uncomfortably rough paper towels before heading back outside toward the car.  At least Seb had warmed it up.

And turned on the radio.  I hated giving him control of the radio; he always searched around for the song he knew would piss me off the most and stuck there.  I sighed and pulled out onto the highway.

“You were butchering that.”

“I beg your pardon?  I sing like a choir of angels.  I should know.”

“Funny thing,” I told him as I took the next exit for Couer D’Alene, “the metaphor doesn’t get any more ironic the more often you tell it.”

“No, but your appreciation of it increases, which makes it worth the telling,” Seb said with a grin.  “Besides, I still hold out hope that you’ll learn to love that song.  It’s like your theme song.  Son of a preacher man,” he sang at me, mocking and serious all at once.  His voice really was beautiful, a perfect dramatic contralto that suited the body he was wearing right now, that of a sweet-faced young man, gangling and loose-jointed.  His hair was a mess of short black spikes, and he wore silver rings through his nose, both eyebrows and along both ears.  All he needed to complete the punk ensemble was a cigarette, but I never let Seb smoke in the car.  I had to have some boundaries, damn it.