Notes: One more from Johnny, and then next time--SOME DRAMA! SOME ROMANCE! Well, not quite, but the beginnings of romance. About damn time, too ;) 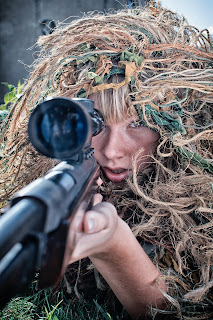 An hour later Johnny was sitting in a chair in the living room with a fresh cup of coffee, one of the muffins that he’d given to Charlie earlier in the week, and a noteworthy view of his freshly-showered companion sitting back on his couch and scrolling through his phone with an intent look on his face. “I’ve still got a lot of friends in the service, but not everybody is going to have the connections we need.”

“What kind of connections are those, exactly?” Johnny asked, almost as interested by getting a glimpse into Charlie’s life as he was in finding someone who could help the Stheno kids.

“When my old unit disbanded, people scattered across the service. I was the only one who had to leave, but more than half of them went into non-combat positions—training, experimentation, that sort of thing.”

Oh, Johnny had more than enough experience with “that sort of thing.” He’d already considered and discarded the idea of asking the experts he worked with for some of the testing equipment he used whenever he went to the “doctor.” It wasn’t that they would reject him outright—it was more than he was absolutely certain that they’d take the price of any request for help out of him in terms of more tests, always more tests, and Johnny was barely able to cope with everything they put him through each month as it stood now. He’d do a lot for his kids, almost anything, but he’d try every other avenue he could think of before he offered up more of himself to professional guinea-pig pokers.

All of this went through his head fast enough that Charlie didn’t seem to notice the slight pause before Johnny said, “So who’s at the top of the list?”

“I’m thinking Jem.” Charlie shook his head. “I mean Lisa Jemison. She was a Delta Force sniper for five years, army sniper for twelve years before that.”

“Ooh, what was her knack?” The army docs had pushed Johnny to experiment with a dozen different knacks when it came to enhancing his ability to see—and hit—things at long distances. Farsight was the best, hands down, but he’d also had some very interesting results with echolocation and other sonar-type knacks. Not gonna lie, standing in that completely darkened lab and seeing things appear in his mind had been a pure superhero moment for him. It had made him feel that hopefully, finally, his strange ability might be party to something that would actually make life better for people instead of boxing them further in.

“Not so far away,” Johnny said judiciously. “You think she’s got spare equipment, maybe?”

Charlie’s mouth quirked up. “The army would say there’s no such thing as spare equipment, but any decent supply sergeant knows that for the right price, lots of things can get lost in the shuffle.” He stared at his phone contemplatively. “There’s a big market for military equipment in the civilian world—mostly for police departments—and there’s a big black market to go along with that. I’m not happy I might have to play into that system, but…”

“The kids don’t even need that much equipment,” Johnny promised rapidly. “There are only a dozen or so seniors who even want to bother with dueling skills among the Stheno students, and they can trade off. Just, even just four helmets, some dampener vests, a few of the gravity imbuers would be enough.”

“Yeah.” Charlie blew out a breath. “Yeah, okay. I’ll—” All of a sudden his phone was ringing. “What the—oh shit!” He immediately answered the phone. “Huda! Yes, I’m here—no, it’s fine, I’m sorry I wasn’t on my computer, a minor emergency came up but—no. Is he okay? Yeah, I can—let me open it up.” Charlie tucked the phone in between his head and shoulder and reached for his laptop, then paused and looked at me. His expression was agonized, somewhere between “I don’t want to kick you out but I have to” and “Oh my fuck, leave right now.”

Johnny stood up and grabbed his coat. This was none of his business, and Charlie clearly didn’t want it to be either. “I’ll pick you up in the morning,” he mouthed, and Charlie nodded with relief. Right before Johnny closed the door behind him, he heard Charlie say, “Hey buddy! Yeah, I’m so sorry I’m late, I missed you too. How was your day?”

That’s the sort of call someone has with their kid. Does he have an ex? When would Charlie have had the time to be married, in all his covertedness and missioning and martial shieldiness?

Don’t be mean. After all, with a few slightly different decisions you could have had a part in all that military bullshit too. It had been very tempting. Johnny hadn’t figured his knack out until really late—he’d been halfway through college by then, and on the verge of losing his mind from the stress of too many credit hours and too little sleep before he saw someone else using a memory knack and, somehow, picked it up and managed to use it. He’d gone to register himself, feeling proud, and a day later the military had come knocking. Or, really, the CIA, but they came under the guise of the military.

We’ll pay off all your student loans. We’ll cover your graduate study fees. We’ll give you a living stipend and a guaranteed job when you’re done with school at a very competitive salary, as long as you give us your time, your mind, your heart. Your knack. Your soul.

Drowning in student debt, it had been tempting. So tempting. But Johnny had refused, and continued to refuse until he’d caught a knack he couldn’t get rid of, one that a mind that hadn’t grown up with it couldn’t properly comprehend, and it had almost driven him insane. He’d caved then, but hired a good lawyer before he made any deals with scientists who were sniffing at his trail like wolves after a deer.

They take so much already. Look at Charlie. Hell, look at poor Roland.

They’re not getting any more from me. Not even for the kids. If Charlie’s deal fell through, they’d find another way. They’d have to.