Guess who's got a serial novel being published on the Radish Fiction app one delicious chapter at a time? This girl! Triumvirate is an (eventual) m/m/m fantasy romance with magic, shapeshifters, assassins, and more intrigue than you can shake a stick at. You can read the first three chapters for free on the app :) https://radishfiction.com/ 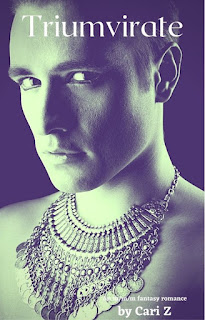 One wedding. Two grooms. Three lovers, preparing to fight for themselves, and their kingdoms.

Sy Parador, adopted prince of the tiny country of Bekkon, is getting married. He doesn’t want to. Quite frankly, he’d rather walk over hot coals—he’s got a spell for that—than marry Petur Alloui, the powerful brother of the queen of neighboring Riyale. Petur is a powerful shapeshifter, and mages like Sy and shifters like Petur have a long and violent history. With the Harrier countries making alliances that foreshadow war, though, they have little choice. If it was just that, Sy might see the bright side to marrying Petur, but the prince is already as good as married to his renegade Harrier lover, Deyvid. Sy wants love, but how can he possibly fit in with this pair?

Petur has a lot of roles to fulfill already. To say he’s displeased when his sister announces he’s marrying the spare heir of their tiny neighbor Bekkon is an understatement. Someone is trying to kill Petur, and he doesn’t need a fumbling bystander getting in the way and possibly getting hurt, or worse. He’ll marry the man—he has to—but he doesn’t have to like it. He certainly doesn’t expect to enjoy it, but Sy—and Deyvid, to his surprise—might just prove him wrong.

Deyvid Clearyeyes is more than just human—he’s a gifted warrior who’s immune to magic. He and Petur have been together for nearly a decade of relative peace. Now war threatens, Petur is in trouble, and Deyvid might be the only one to see the bright side of this marriage. A powerful mage like Sy could help protect Petur against threats Deyvid can’t fight off alone. He doesn’t count on coming to like Sy—even love him—himself. He certainly doesn’t count on Sy loving him back. Weddings, spells, assassins, and intrigue—Triumvirate is an erotic romance story told from the perspectives of three very different men learning to love and fight for each other, saving their homelands in the bargain.