Notes: Back to Charlie's POV! What's going on in that head of his? Even he's not very sure at this point. 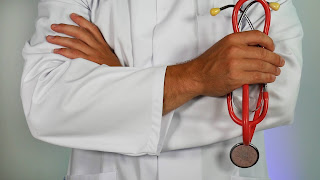 When Charlie came to, it only took a second to realize that he was in an emergency room. There was something about the feel of the place, scents and sounds and the stiffness of the bed under his back informing him immediately that he was in a sterile, noisy, uncomfortable place meant to provide fast care, not comfort. That had to mean he wasn’t so bad off. But what had happened to him, anyway? He tried to focus.

You were at that god-awful party. You talked with someone—a teacher—what was her name? She mentioned lesson plans, mentioned all the new students, everything you still have to do…it felt like to much. You had to leave. You excused yourself, ran out to the lot, started to drive…and then…then… He could recall a pale, stern face beneath the streetlamps, feel his foot scrambling for the brake and not being able to find it, and then…

Nothing. Not until he woke up here.

There was a man nearby, talking to someone else—a doctor, a nurse? No, there was no audible response. He was talking on his phone, then. “—right into the steering wheel. No, they won’t tell me much because I’m not family, but apparently he’ll be okay. Maybe a concussion…I don’t know! No, trust me, I know this person’s knack like the back of my hand, he’s a shield, a high-level one.”

Wait a second, who was this person? How did he know Charlie’s knack? There was something a little familiar about the voice, he had to admit. He kept his eyes closed, but listened more intently.

“I thought he would stop me… Yeah. I do. I told you how he was driving, right? I think it’s because he was having a panic attack. So he must not have been able to shield by the time he saw me, or even stop the car. No. No, of course not, are you crazy? Tha—that was a decade ago, you’re nuts. Of course not. How would he even know who I am anymore? I don’t look that much like I did in high school. No…no, he doesn’t either.”

Someone Charlie had known from high school, then. Someone who had a reason to remember his knack, someone who also thought Charlie would have no reason to remember him. It wasn’t like he had a wide circle of friends when he was at Stheno, though; mostly jocks and other kids with knacks that destined them for military service. The only other person he could think of was—

Oh, shit. Johnny Gibilisco. The kid he’d put in the hospital when he slammed him with a shield hard enough to break bones. And now, apparently, he’d almost run the guy over. Great, just fucking great. Charlie was so sued. He was sued into oblivion, even if he didn’t go to prison for reckless endangerment or whatever it was cops charged you with when you almost hit someone with your car, and then he’d go to prison and never get to talk to Ari again, and Huda would fucking murder him for it.

His heart rate sped up without permission, and a corresponding monitor started to increase in tempo.

“Oh hey, wait, I think he’s waking up. I’ve got to—yeah. Okay, bye.” There was a faint beep, and a second later Charlie felt a warm presence right beside him in the cold of the room. There was no touch, but it was awfully close. “Hey,” Johnny—and yep, no way that wasn’t Johnny, his voice sounded almost exactly the same—said gently. “How are you doing, Charlie?”

Charlie took a deep breath and forced himself to open his eyes. He stared up at Johnny, who looked older but somehow kinder, and croaked out, “I’ve been better.”

“Right, shit.” To his surprise, Johnny seemed kind of distressed about that. “I’m so sorry. When I stopped your car, I had no idea you’d get hurt. I thought you’d shield.”

There was…a lot to unpack there, but Charlie decided to start with the easiest part. “How hurt am I?” It couldn’t be that bad—he wasn’t even on the good drugs, if the pounding in his head was anything to go by.

“Let me get the doctor,” was Johnny’s unsatisfying answer, and he left the curtained enclosure. A moment later a dark-skinned man in a white coat wearing a Garfield tie walked in.

“Mr. Verlaine, nice to see you awake! I’m Doctor Singh.” He smiled encouragingly. “How are you feeling?”

Like I got hit in the face with a steering wheel, I guess. “Sore. I have a headache.”

“Mmm, that’s to be expected. You took a fairly hard hit to the very front of your forehead, and got a slight laceration just below the hairline there. No breaks, though—you have a hard head!” He seemed pleased by that. “If you’d let me look into your eyes for a moment…”

They went through a diagnostic song and dance for a bit, and then Doctor Singh said, “If there is a concussion, it’s very mild. Your companion thinks that your unconsciousness was more the result of the panic attack than the impact, and I’m inclined to agree. Do be careful about those stitches over the next week—you’ll need to have them taken out by your GP after that—and I’ll send you home with a prescription for extra-strength Tylenol, if you think you need it.”

“Nah.” He already had a bottle of the stuff at home, along with a bunch of other meds that he generally tried to avoid taking. “I’ll be all right. Thank you.”

“Of course. Now, there’s just the paperwork to finish…” He handed over a clipboard and a pen.

“Right.” Of course, the insurance information. Fuck, but it had been so much easier getting injured when he was in the service. He hadn’t had to keep track of any of this shit. Now he fumbled for his wallet, surprised when he didn’t feel the bulge of it in his pocket.

“Sorry, I have that.” Johnny handed it over. “They wanted an insurance card and your ID when I got you here,” he said sheepishly. “I didn’t take anything else out, promise.”

“You brought me here?” Charlie had absolutely no memory of that.

“Um, yeah. You were out of it earlier, but not completely? Enough to let me know you didn’t want me to call an ambulance. I figured a hospital visit was non-negotiable, though.”

Damn. Well, at least he’d be spared the expense of an ambulance ride. “Thanks.”

“Really, it’s no problem. Especially since it’s my fault you’re in here.” Johnny touched the side of his forehead with a wince, indicating Charlie’s wound. “I’m really, really sorry about that.”

Wait. Was it possible that Charlie wasn’t going to get sued into nonexistence? “It sounds like I should be sorry,” he tried. “Seeing as I almost ran you over.”

“I could have gotten out of the way,” Johnny said. “I was only standing there because I didn’t want you to get into an accident on the road. Then I caused one anyway.” He shook his head. “I didn’t really think it through.”

What kind of knack did this guy have nowadays, that he could stop a car coming at him? Charlie was tempted to ask, but even in his muddled state he knew that would have come off as rude. “Does the car still drive?”

“Um, no. Sorry. I moved it to the back of the Academy’s parking lot for you, but…no.”

He moved it there…but he didn’t drive it there. Had to be some sort of strength knack. Kind of ironic, all things considered. “It’s fine.” It wasn’t, he needed a car, but he’d figure something out. “I’ll call a rideshare home.”

“I can take you,” Johnny immediately offered. “It’s the least I can do.”

Definitely not going to be sued into oblivion. Charlie tried not to let on how relieved he felt. “Thanks.”