The Tank: Chapter Three, Part One

Notes: Finally, we meet someone we actually want to! Because I can't not bring in the second half of my dynamic duo once I start with these stories. 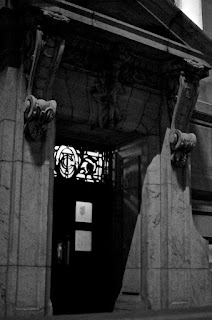 Oh God, what had he done?

It was a despicable quirk of nature than Anton was able to recriminate himself even as he ran for his life. It would have been a kindness for him to fill with panic as he fled, unable to think on the situation he’d left behind and what he might have just done to the man who had so recently menaced him.

It didn’t help much that the man had been menacing him either, as it might have if Anton were a little less inclined to overthink things. He’d been threatened with rape, but he’d retaliated with forcing the man to relive a hideously brutal death. Anton swore at himself as his feet began to slow—he shouldn’t go back, he absolutely shouldn’t go back, there was nothing he could do now but let it play out.

On the other hand, the only other person he’d ever worked this spell on was himself. One data point was hardly enough for Anton to draw any sort of conclusions from. Perhaps he could watch from a distance to ascertain the man’s condition, see if he’d come through all right, and if not…well, then, perhaps Anton could—

A hand suddenly gripped his dangling left wrist and jerked him sideways, pulling him into the shadow of a deep doorway. Anton squawked and lashed out with his elbow, riding the surge of adrenaline to help him fight back. He’d been followed, someone had caught him, they were going to try to—

“Anton!” Another hand caught his elbow and pressed it down and out of the way, but nothing about it hurt. Even the grip around his wrist was only tight enough to restrain, not to injure or bruise. “It’s all right,” his gentle captor said. “It’s just me.”

“Camille!” Anton felt like he should have seen this coming, after the day he’d had—unexpected visitors seemed to be in fashion. On the other hand, he’d learned better than to expect what he wanted to happen to actually occur, and he had wanted Camille for months now.

Yet it was Camille. He looked haggard, even more so than the last time he’d visited, and there were a few worrying strands of gray that hadn’t been there before in his moustache, but it was him. There was nothing but warmth and concern on his face.

“I’m sorry I had to—” That was as far as Camille got before Anton pressed in against him, his arms still trapped but not even caring about that, turning his face into the side of Camille’s neck and just breathing. “Anton,” Camille said again, softly this time. He let go of Anton’s arms and wrapped him in an embrace, which Anton was pleased to be able to return. “It’s all right,” he murmured. “You escaped.”

“And what he almost did to you, don’t forget. Not that I would have let him. I’d caught up to you a block earlier, but I didn’t want to approach you in that part of town if I could help it—it would give people the wrong impression.”

“I wouldn’t have cared.” The whole world could have thought Anton a catamite and he would have endured it, if it meant meeting up with Camille a moment sooner.

“I know, so I had to care for you.” Camille paused, then said, “I’ve never seen a death miasma resurrect like that before.”

“It’s not a—well, it’s a…” Anton sighed. “I would love nothing more than to tell you all about it, but I can’t right now, I just can’t—the words are right there on the tip of my tongue, but I can’t speak them. I just—I might have killed that man. I could have killed myself the first time around, and I was only experiencing a suicide, not a—” His voice cut off as Camille’s grip became brutally tight for a moment. “Can’t…breathe…” he squeaked out.

“Damn, I’m sorry.” Camille pulled him arms away all at once, leaving Anton with nothing to hold him up but his own shaking legs. “But what do you mean, you experienced a suicide?” He looked slightly manic around the eyes. “You were suicidal?”

“No—no, I wasn’t at all!” Anton insisted. He could see now how what he’d said might have been misinterpreted, and lord, wasn’t he just going a wonderful job at cocking everything up today? “The first time I cast the spell, it was actually an accident—I was trying out ingredients that would result in a rising, yes, but nothing so powerfully formed. I meant it to be a spell that could be used to help investigate older cases, but I dropped the wrong thing at the right time and got a bit of mercury mixed in that shouldn’t have been in there, not to mention the—well, regardless, it ended up producing much what you saw back there.”

He exhaled slowly. “Only in my case, the dead man had been in the act of committing suicide, hanging himself from the rafter of my laboratory. He didn’t die easily. He suffocated, and the whole time I felt what he felt, and he was so filled with regret, and he wanted to reach the chair he’d just kicked away, wanted to stop what he’d put into motion, but there was no way out. It took him nearly three minutes to die, and I lived the entire thing with him. I…lost most of that afternoon to disassociation, honestly.”

“That sounds hideous,” Camille said, his skin taking on a bit of a ghostly pallor.

“Oh, it was utterly incapacitating,” Anton agreed. “But so interesting too, don’t you think? I knew I was onto something, so I kept working at the spell in my spare time. I filled the wooden ball up with all the right ingredients some time ago, but I confess I was too afraid to drop it for the longest time. I’ve been carrying it around for over a month now, trying to find an area to set it off where I was least likely to be debilitated.”

Camille held up a hand between them, the other one squeezing the bridge of his nose. “Stop. Just…don’t speak, for a moment.”

Anton stopped. He felt a bit sick to his stomach, all the impulse to fight or flee fully drained from his body, leaving him tired and a bit desperate feeling. “I’m sorry,” he offered after what he hoped was an acceptable interpretation of a “moment.” “I’m not sure what I said that upset you, but I wish I hadn’t.”

“It’s not you,” Camille assured him, lowering his hands. “It’s simply that…I’ve been hoping, for quite some time now, that you were safe here. I have not been particularly safe myself, and one of the few things that gave me any sense of comfort was the idea that you were perfectly well and taking care of yourself. And now I find out that you’ve invented a spell that can force a person to relive whatever violent deaths may have occurred in the vicinity it is cast, and in doing so leave them as helpless as babes. It’s a mental contradiction, and it’s taking me a moment to come to terms with it.”

“Oh.” Anton felt very small, but also oddly warm as well. “I really am very careful,” he said. “Please tell me you know that. I wouldn’t deliberately put myself in danger.”

“I know,” Camille agreed. “And I respect your expertise. I just…” He blew out a breath. “Will you stay with me tonight? I have a room not far from here, and I know that you’ve just graduated and you probably have parties to attend and people to see, but—"

“Absolutely,” Anton said before Camille could finish talking about silly things like Anton possibly preferring someone else’s company. “Let’s go there now.”
Posted by Cari Z at 11:19 AM