Notes: More Reformation, yay! In which Garrett talks to himself, because lord knows it's hard to find intelligent conversation these days. 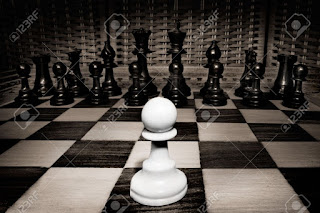 There was an old Earth game called chess that was supposed to be a useful tool for developing your sense of strategy. Miles played it, Garrett knew, but he’d never tried to get his son interested in it beyond the basics. Garrett knew why, and he wasn’t offended. Chess was all well and good for a conflict that could be played out in three dimensions, but for all the bitching he’d done as a young man, for all the running away from conflict and burying his head in hedonism and trying to ignore the universe, Garrett—when he focused—played his life to win in every dimension he could think of. And there was nothing more important right now than winning. But what was the ultimate goal?

Saving Pandora, that was in there. He’d laid the threads for success, and if Miles used the information Garrett had given him, then their odds went up. It might be too late to save Jonah—not that Garrett would ever openly admit that to himself, because that would mean he’d already lost a major battle, the kind he might not recover from—but it wasn’t too late for the colony. Or for the poor green kids being sent out to manage a situation that was almost designed to get them killed.

Saving Jonah—well, obviously that was important. Garrett might as well be saving himself by saving Jonah, because there was no guarantee he was going to be able to hold his mind together, drugs or no, if his husband was dead. Saving Cody—right on par, and a major misstep for Garrett. He should have moved faster, gotten Cody in hand before he told him what was going on. But Cody had Ten with him, and Ten was the human equivalent of a flamethrower: illuminating, useful, and incredibly dangerous. Cody was in good company. The other kids were with Miles, so as safe as they could be without causing a diplomatic incident and pulling Grennson off the ship, which he wouldn’t tolerate if it meant leaving Darrel behind.

What else here was worth saving, though? The rift between the Central System and the fringe planets grew day by day, their respective governments so full of mutual loathing that they set up blockades to getting actual progress made—any progress—at every turn. Financial centers played games with their assets, and the people in charge passed the risk on to their poorest customers. The president of the Federation was a dictator in the truest sense of the word, expecting perfect obedience and more than willing to kill if he didn’t get his way. And yet, they all pretended everything was fine. Because what was the alternative? Anarchy? The dissolution of the federation itself?

The biggest problem with that, as far as Garrett was concerned, was that the bulk of the military power in the federation rested in the central system, and revolved around the Academy. If that power structure didn’t change while the balance of power shifted, then what was now a nominal federation would turn into a system of conquest. Fringe planets would be actively invaded by Central System planets with enough ships to make their voices heard, and people would be effectively enslaved.
So then. That was something that needed to be dealt with too. Luckily President Alexander had already taken care of the heavy lifting.

Garrett sent of call requests to half a dozen different people at once. They wouldn’t all get back to him quickly, but it didn’t matter—he needed time to think. He sat back in his chair, linked his hands behind his neck and stared out at nothing for a moment. He had to deal with Raymond. He had to deal with the military. He had to deal with the financial centers, powerful entities in and of themselves. And he had to do it in a way that meant he wouldn’t get stuck holding everything together in the end, because Garrett was a lot of things, but presidential wasn’t one of them.

“I think you could be pretty presidential if you set your mind to it, darlin’.”

“Because,” he said on a sigh. “You’re not really here. You’re just my own subconscious projecting the thing I want most of all to me in a moment of mental weakness.”

“If that was true, you wouldn’t be sitting across from me right now.”

Jonah leaned forward and propped his chin up on his hand. “I don’t know about that. Seeing people who aren’t actually there isn’t the worst thing, as coping mechanisms go.”

“Well I think it’s pretty bad. Or don’t you remember how I get when my brain chemistry is off?” Garrett chuckled. “Of course you do, because you’re a part of me. This is a bad road to go down.”

“Then go to the nearest autodoc and let them adjust you,” Jonah suggested. “Get that brain chemistry wrangled back into submission and you can go back to your thinking, and not missing me.”

“Because…” Garrett stared hungrily at the image of his husband. “Because it’s not enough. It’s not real, and I don’t need it to handle things right now.”

Jonah shrugged sympathetically. “Are you sure about that? Maybe if Miles was still here, or Claudia and the girls, but they’re all gone. Everybody has left you, and they didn’t want to, you know they didn’t, but that doesn’t change the fact that they have. So why begrudge yourself a simple coping mechanism?”

“Cody wanted to leave me.” Garrett’s eyes hurt when he said it, and he squeezed them shut. “He chose to go. No one made him do it.”

“His love for me made him do it. That doesn’t mean he loves you less, just that he was less worried about you.”

“He didn’t want to sit idle while you did everything yourself,” Jonah corrected. “Like you almost always do. People need to be useful, babe. Cody especially.”

“I don’t…” Garrett sighed. “I don’t know how to help him. He’s on a Drifter ship, which is literally one of the only places in the universe that my reach doesn’t extend to. He’s with Jack, and we know what a brilliant thing that is. He’s got Ten, but who’s to say they’re even going to go to Pandora? Why not steal him and keep him with them forever? You know Jack wants him.”

“Jack doesn’t know what he wants.”

“But as long as the rest of us don’t want that, then he’s got no leg to stand on, darlin’.” Jonah smiled gently at him. “I’m yours. For life. For more than that.”

“Life could be a long time,” Garrett mused. “Marriages are more about assets that emotions these days. Why tie yourself down when you live so long?”

“Because I want to be tied. Bedroom metaphors aside, you know I do. And I know that you do too. You want something permanent, you always have.” Jonah slid a hand across the table toward Garrett—not close enough to touch and ruin the illusion, but close enough to see the tiny mole on the back of his left index finger, right at the base. Close enough to see the smooth veins wind beneath the surface of the skin, close enough to see the jagged clip on the edge of his right thumb where Jonah had probably cracked it while doing maintenance on his ship. They had tools for that, damn it, he didn’t need to mark himself up just to get the job done.

“I know,” Jonah said. “But I like getting my hands dirty every once in a while.”

“Is anything you say not laced with innuendo?”

“Only you can answer that question, Gare.”

Garrett blinked at his husband tiredly. “I miss Robbie and Wyl.”

“I wish they were here. They would have stayed.”

“Probably. But they’re not here, and they ain’t comin’ back any time soon. You’ll have to manage without them.”

Garrett chuckled. “You’re getting soft if you’re calling me sweetheart outside of bed.”

Jonah shrugged. “It’s a special endearment. Sometimes something special is called for.”

Garrett opened his mouth to reply, but then his comm started to ping. Who was it, Liang? No, the first return caller was Berengaria. Well, not the easiest to deal with, but her role was the simplest. He activated the call. “Ms. Alexander.”

“Mr. Helms. Your message said it was urgent.”

“It is.” Garrett rubbed his eyes for a moment, then sat up in his chair. When he looked, the seat across from him was empty. He sighed. “Let’s talk about your family holdings.”
Posted by Cari Z at 10:58 AM