Notes: Back to Jonah. I've never had to work quite this hard before, but trust me when I say I'm writing some of this from memory. What can I say, backpacking in Colorado for the win! 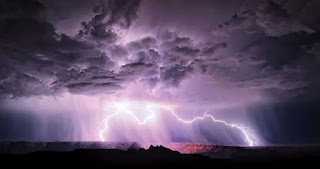 Well. He could see in flashes, the sudden crack of lightning illuminating the terrain in front of him in flickering waves, then vanishing just as fast and leaving nothing but darkness and rain behind. The water poured off the ends of his hair and into his eyes, slipping inside the hood of his jacket like it wasn’t even there thanks to the unpredictable wind. The light at his waist was only good for a few feet, directed as it was at the ground, and he couldn’t lift it up to look ahead because he had to keep his hands on the cords binding Lacey’s stretcher to him. He didn’t dare let go. Already the wind had tried to rip it from him, the rain had loosened his grip to the point of endangering it, the ground had tilted and twisted him as he plowed across the slick, uneven rock. One misstep, and he’d drop her. If he dropped her, he wasn’t sure he’d be able to pick her up again.

“I gotcha.” He said it for himself, not for her; Lacey was unconscious, and so much better off for it. “I gotcha.” He had her, and he had a destination in mind. He just had to make it there. “I gotcha.” Was he still going the right way? Would he even recognize the bunker when he got there? If he got there? If the lightning died and the wind picked up and the clouds rolled in ever tighter, would he even see it, or would he walk right off a cliff and take Lacey with him.

“No.” He wasn’t going to do that. He had a responsibility, damn it, and he was going to see it through. What kind of person was he if he couldn’t even manage that? What kind of man?

“Nobody’s perfect, Jonah.” Garrett had said that to him once, after what Jonah couldn’t remember, something insignificant that had still gotten Jonah’s brain in an unhappy place. It hadn’t soothed Jonah as much as he’d wanted it to, because if anyone ever came close to perfect, for all his flaws and faults, it was his husband. And right now, anything less than everything would end up meaning…nothing. For him and for Lacey.

Fuck, but it was cold out here. Jonah paused and regripped the straps, taking a long breath as he waited for the next flash. It showed him an uphill slope, maybe as steep as thirty degrees and slicker than all get out, the kind of rock that crumbled beneath your feet and treacherously took you down with it. He had a couple hundred meters of that ahead of him, and just the thought of it made his legs tremble. His hands were mostly numb by now, but he forced them to hold on tighter anyway.

They weren’t that far from the ship. He could turn around, take them back to where they’d be dry, if not perfectly safe. It wasn’t too late to go back. Jonah shut his eyes against the driving rain and ducked his head, inhaling fast and deep. No. He’d started it, he had to go on. There was no way forward but one foot after the other. “Go,” he told himself. “Go. Go, damn it, go.”

Finally his legs listened. They picked up, sluggish and straining against the weight of the travois, but they moved, and everything else moved with them. Jonah forced himself up the hill, slipping and sliding, getting buried up to his knee in scree at one point, feeling the sharp rocks poke at his leg and break the skin around his ankle where his pants had ridden up. Defensive fabric was only useful where it covered you, but he couldn’t bent down and fix it, not now. Not on the hill, not when he was only halfway up. Less than that.

Jonah took a breath, and a step. Another breath, another step. He couldn’t remember working this hard in his life before, couldn’t remember being so cold and numb and in pain all at once, couldn’t remember if his back had ever spasmed like this, or if his hands had ever been so cold he lost all sense of them. He couldn’t remember anything except the feel of driving, needle-like rain, the ache in his shoulders that spoke of Lacey’s weight, the weight of the travois, sitting heavy on them. He felt the burn in his lungs and throat, and the beat of his heart echoed in every vein in his body. He felt it all, and he moved for it. It was terrible, but if it stopped, so did he, and he couldn’t let that happen.

When the ground leveled out, Jonah actually fell down onto one knee, it was so unexpected. He instantly forced himself back up, because no, no, he couldn’t stop, he couldn’t take a break, and what was that sound…

He turned back to look the way they’d come, back toward the little shuttle that had provided so much and been so inadequate in the end. It probably wasn’t even a kilometer distant at this point, he could see exactly where the shallow, flat spot they’d crashed in was, see the wire twisting where it held the ship in place, see…

No shuttle. Holy shit. Even as he watched, the wire whipped around in the wind, still attached to the port on the shuttle. It was just the rest of the shuttle that was gone, the rock beneath it scraped even flatter as it fell away into the sea. Fuck. Fuck.

“Well.” It hurt to talk now, but silence didn’t seem right in the face of what had been so close to utter disaster. “Glad we left.” Otherwise they’d be sinking right now, water pouring in from a dozen tiny faults in the hull, going deeper and deeper or just lodging on the sharp rocks below and Jonah could be drowning right now, he could be watching Lacey drown, he could be spending his last breaths screaming uselessly for his husband, his son…

It was too cold for thinking. Jonah turned away from the ruin of his former path and pressed on, across the expanse that stretched too far in front of him. One kilometer down, one more to go. He could do this. He’d recognize it, he’d seen them before: a dome, something round in the midst of sharp edges, something smooth where everything else was rough. Lighter in color, not the blue-black of the rock but the dull grey of indestructible concrete. He’d see it. He’d see it. He would.

He did. It actually took him a moment to recognize that he was looking at his salvation, it had risen out of nowhere so unexpectedly. The bunker was set a little ways back in a sheltered section of cliff, pointing right at him, it’s old-school rotary handle staring him in the face. “Shit.” He glanced back at Lacey, but her face was covered against the rain. It didn’t matter. “We’re here, darlin’.”

Setting her down was a trial, not because he didn’t want to let go but because he couldn’t, not at first. His hands were cramped into claws, wound ‘round with cloth so tight the stitching was burned into the skin of his palms. In the end he had to crouch and take the weight off to manage it, and his legs screamed at him indignantly as he did. Once she was down, he just had to open the place.

Thank science for non-rusting materials. The handle stuck a little bit, grit in its gears, but once Jonah go it going it turned smoothly, not needing more than a guiding hand to spin in place until the locking mechanism let go, and the door cracked open.

It was dark inside, and the air smelled stale. It was cold too, but it was dry, and as soon as Jonah stepped in the emergency lighting flickered on. He dragged Lacey after him, too desperate to get her inside to appreciate their surroundings yet. He shut the door, moved the shield covering her face and leaned in to make sure she was okay. For one, brief moment Jonah couldn’t tell whether or not she was still breathing, and his heart picked back up into attacking territory before he finally made out the incredibly slow rise of her chest.

“Fuck,” he groaned. “Don’t scare me like that, kiddo.” Reassured, he left her alone for a moment as he forced himself back up to standing and looked around. He could hear the hum of the generator, years’ worth of fruitless power now coming to bear. He saw the cot illuminated by the neon light, the cabinets against one wall that probably had food and water, the best of all, the little Regen unit that glowed with life. It wouldn’t fix everything, but it would keep Lacey stable. Thank fuck.

There was a little table in the middle of the floor, with a book on it. Jonah hobbled over to it and picked up the book. It wasn’t an antique—the pages were a durable blend of metamaterials that were resistant to staining, tearing and other sorts of destruction—but it was a real, genuine book. On the cover were the words The Road. On the inside cover was an inscription: Read this and tell yourself that things could be so much worse.  It was Garrett’s handwriting. Of course it was. Who else would think of stocking an Old Earth survival novel in every bunker?

Jonah laughed until he cried.
Posted by Cari Z at 11:12 AM