It's time for news, news, news. My feet have recovered, my fingers are flying and I've got all sorts of stuff going on. The big things lately are this:

Firstly, my upcoming Riptide release Friendly Fire is available for preorder. It comes out in October, but preorder and you get it a whole weekend early! Elliot the conman-made-good, Lennox the frustrated cinnamon roll, plus a teenage girl, a tiny dog, intrigue, drama and, of course, firefights. Because yeah, I might have written something contemporary but I'll be damned if there isn't something/someone getting shot or blown up in it. 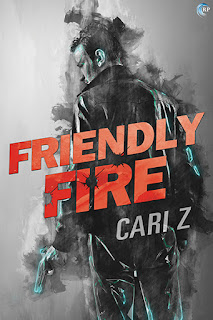 The other thing...do you guys remember Soothsayer? Cillian Kelly making bad choices and a landvaettir inhabiting the body of his lover as they swung along for the ride? Pretty banner?

I reworked the lame parts, edited the whole thing and sold it to Nine Star Press! Urban fantasy fun ftw! I'm very excited to be working with them again. Now, the bad part...I had to take most of the story down off the blog. The posts are still there, but only the first few paragraphs of story remain, if that. I've gotta be fair, after all. I hope if you've read it before you'll want to pick up the new and improved version, and if not...hey, at least you got it for free in the first place, right?


That's it for now! I'm working on a few other interesting things, including some fun collaborations I look forward to telling you more about, but the next thing to look forward to is the culmination of The Train, coming on Tuesday.
Posted by Cari Z at 2:43 PM