Notes: On with the show! We get some more Johnny POV, meet his neighbor, and more importantly, we meet Sparkles and Sarah. 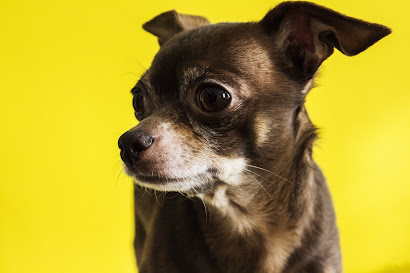 The name bounced off the inside of Johnny’s head all the way home. He drove on autopilot, stopped at the correct lights and turned in the correct places but hardly noticing the traffic around him. When he pulled into the driveway in front of his half of the duplex, he blinked and looked around and wondered how he’d gotten there.

“Shit.” He needed something to eat, something to drink, and something mindless to relax him after a day like today. He opened up his door, stepped out of the car—

--and was immediately assaulted by his neighbor’s dog Sparkles. “Ow!” Sparkles was a teacup chihuahua who ran at the speed of molasses and had a tendency to quiver, but her teeth were sharp enough to cut right through the hem of his pantleg and scrape the skin beneath it.

“Sparkles!” Lora Donahue, a retired kindergarten teacher who’d apparently decided to put away the primness required by her position when she got out of the classroom, came bursting out her side of the duplex wearing a black ruffled bathing suit, a pair of hot pink crocs, and a sheer, gauzy coverup that didn’t live up to its name. “Get back here! Sparkles!” Sparkles, meanwhile, had doubled down on getting a grip around Johnny’s pants. She growled viciously and shook her head back and forth, dominating his hemline with all she had.

“Oh, you rotten little thing.” Lora huffed and came over to Johnny, picked her little dog up and cradled her against her chest, cooing, “Rotten, so rotten! What is mummy going to do with her naughty little girl?” She looked down at Johnny—down, because Lora might be sixty-eight but she had two inches on him even now—and said, “Sorry about that, sweets. I let her out to do her business and the next thing I hear, she’s trying to commit murder. Did she nip you?”

“Mmhmm.” She eyed him suspiciously. “Sure. Lemme get you a banana bread.”

“Oh, I heard about what happened at Stheno today, so I actually think it is necessary.” She pursed her lips. “I’ve got a squash pie with your name on it, too. You need to get your vitamins.”

Johnny stopped arguing, because there was resenting being babied and then there was turning down Lora’s summer squash pie, which tasted like custard and sunshine and was way better than any pumpkin pie he’d ever tasted. He waited while she vanished through her door with Sparkles, then opened his arms to receive the pile of baked goods she’d decided to bestow on him.

“Brought you a bag of chocolate zucchini muffins, too. My daughter Hannah is growing her first garden this year, and I told her ‘Baby, trust me, one zucchini plant is enough to feed two families.’ But did she believe me?” Lora scoffed. “She planted three. I’m drowning in zucchini and my grandkids are learning to loathe the sight of it, but this…” She tapped one of the muffins. “This is a good recipe.”

“Oh, I don’t doubt it.” She smiled unexpectedly at him. “But I’m sure things will turn around, Johnny. Go, enjoy some dinner, watch some trashy television, and when you feel up to it you can tell me how last night’s hot date went.”

Oh Jesus, had that been just last night? It felt like a decade ago at this point. “There isn’t much to tell, sadly. He was forty minutes late to the restaurant, he drank three beers before I’d finished my first, and then he went to the bathroom and didn’t come back.”

Her eyes widened. “You got dine and dashed? Johnny, whatever app you swiped right on for that asshole, go and leave him a scathing review. Or let me do it, I’m good at those. I eviscerated the AirBnB I stayed in last year that had the mouse turds on the kitchen counter. Got all my money refunded and everything.”

Johnny chuckled. “I don’t think I’ll get a refund on the bad date, but I appreciate the thought.”

“I’ll ask the good lord to give that jackass a nice case of gonorrhea tonight,” Lora promised before heading back into her half of the duplex. Johnny spent a few seconds juggling his bounty while he found the right key on his ring, then opened up his door and walked inside with a sigh.

He headed for the small kitchen just past the living room, the emerald-colored carpet squishing slightly under his feet. In the distance he heard a meow. “Sarah?” he called out to his elusive kitty cat. “Are you coming to say hi?”

It sounded like she was in the space beside the fridge. “Sarah?” He put his food on the counter and crouched down to take a look. He could see her glowing eyes, but nothing else—she was as black as a shadow, and just as elusive. “Want to come out and say hello?” he asked softly. She didn’t meow again, and after a moment he left her alone. Sarah was a shelter kitty, newly adopted, and they were still getting used to each other.

Johnny’s previous cat, Tabitha Twitchit, had been the same one he’d had since middle school, a fat old tabby who was pushy and smelly and always slept curled up around his head, without fail. She’d died a year ago last month, and a week ago Johnny had finally taken the plunge and adopted a new cat. Sarah had been the shyest one at the shelter, but her big, luminous eyes had captured him. To say they were still getting used to each other was too mild, but he had hopes that she’d do more than sit on the other side of the couch as him while he played Forged in Fire reruns.

Let’s see…he could cook something, or he could eat a quarter of the squash pie and a zucchini muffin for dinner. “Sold,” Johnny muttered, plating the treats because he wasn’t a savage who ate pie straight out of the tin, then grabbed a fork and sank down onto his couch. He pulled up Netflix and stared at the screen blankly for a bit, then put on a movie he’d watched before and settled in to eat.

God, he was tired. He was so tired and wired, and he still couldn’t stop thinking about Charlie fucking Verlaine. He’d been such a jock, but so hot, too. Johnny had oscillated between near-adoration and outright loathing for that kid all through high school, right up until he’d tried to impress Charlie by showing off a knack that Johnny didn’t know how to control yet, a knack that didn’t have a name.

He’d been absorbed into the military, like so many of the rest of their classmates. Johnny had assumed he’d never hear about the man again, and he hadn’t until now. What was Charlie Verlaine doing teaching at Euryale Academy?

Johnny pulled out his phone to do a little digging, conscious of the slim dark shape appearing at the end of his couch. He didn’t look at her, just kept his eyes on his search, and Sarah eventually settled in two cushions down from him. He would have smiled, but suddenly…suddenly he had nothing to smile about.

“Honorably discharged?” That was all the little article in the town paper’s “Local Knacks” section had to say, but the site led to another article which mentioned the action Charlie had been involved with overseas, and how it had cost him—