Pitch Wars and a New Release: The Art of Possession!

Two big, big things today, one of which I'm rather conflicted about. First, the awesome thing--I succeeded in getting into this year's Pitch Wars! For those who don't know, Pitch Wars is an annual contest where aspiring authors pitch their manuscripts to those a little further along the path in the hopes of getting a hands-on mentorship to prep their novel for an agent showcase in February. It's a big deal, and I'm thrilled to be working with Janet Walden-West and Anne Raven (#TeamSubversive) on my book Magical Hazmat, about a biomagical engineer who wants to introduce more science into the magical messes she cleans up. Over 3500 people applied to be mentees, and there were a little over a hundred spots available. I beat some long odds for this, and I'm utterly and completely thrilled.

Now, for my second piece of news, which...*sigh*. Under normal circumstances I'd be thrilled to have a book coming out, but this one is coming out with Dreamspinner. I finished it at the beginning of the year, before things got as dire with the press as they are now, and was paid an advance for it. Until I earn that advance out, I can't take this book back, because I simply can't afford to.

That said, I love this book, which is called The Art of Possession. It's a modern-day adventure/Indiana Jones story, with more mutual affection and less thieving of priceless cultural artifacts. If that sounds good to you, please consider picking it up. 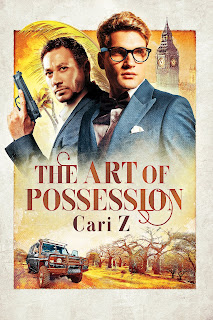 Blurb: When a treasure-hunting black ops soldier and a disgraced, reckless archeologist team up in search of a priceless artifact, they might get more than they bargained for.

Just as they realize the feelings between them transcend convenience and the thrill of the chase, a rival reemerges, threatening everything.