Notes: A few callbacks to earlier characters this time around, plus glowing mushrooms, dead parasites and not looking a gift horse in the mouth. 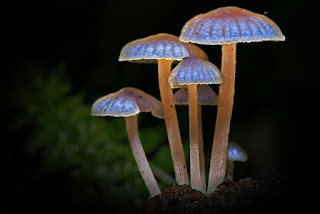 Cas blinked as Fillie’s hand came down on his shoulder, startling him out of the tangled confusion of his own thoughts.

“Are you okay?” Fillie asked, her smile giving way to a frown. “Did everything go all right with Dr. Weiss?”

He forced himself to act normal. “Fine, it was fine. Except for the power outage.”

“Wasn’t that so strange?” Fillie marveled. “The brass were supposed to undertake a complete overhaul of the power generators while we were on our mission to Leelinge. The upgrades the engineers had planned should have made actually losing power impossible. I mean, my gosh, we can travel to whole other star systems, shouldn’t we be able to keep the lights on here at home?” She tilted her head in a subtle suggestion, and they began to walk down the hall together. “It’s better not to linger around Medical,” she murmured. “Apparently there’s no such thing as too many tests, and they’re always looking for people to volunteer for research studies.”

Not this person. “Where are we going, then?”

“Well, the captain should be done with his meeting with the admiralty by now, which means he’ll be in with the Chief, but…” Her frown got deeper. “I don’t really think that’s a good place for us to rendezvous. The Chief is still kind of…” She wagged a hand back and forth, the servos in her gauntlet whining gently. “Kind of iffy on you. Which isn’t your fault at all, Beren,” she hastened to add. “It’s just after what happened to Jamal, he’s…well. Yeah.”

Cas was a little too on edge to reel all of his sarcasm in. “He’s afraid I’m going to nefariously lure another of his innocent engineers down a dark hallway, where I’ll force them to try and kill me just so I can have the pleasure of crushing their heads with their own equipment?”

Private Fillie sighed. “Something like that. The guy’s a great engineer, but he’s not the most reasonable person. Anyway, I thought we could go to the botany lab instead, we can—whoops!” She threw a salute at a passing officer, who barely glanced their way before continuing down the hall. “Huh. That’s strange.”

“That’s Admiral Glasden’s chief of staff. I’m just kind of surprised to see him over here—the admiral’s office is on the other side of the compound, the captain and the commander probably had to run there to make it to their meeting on time earlier. And now he’s here, instead of…” She looked after him for a moment, then shrugged. “It’s probably nothing. Anyway, botany!”

It was strange. Being around Fillie, especially with everything else going on right now, should have annoyed Cas. He had Christala to find, he had Rone to trick, he had the loyalty of his children to maintain. Fillie was a distraction, endlessly chatty and ruthlessly cheery. But he enjoyed her company, more than almost every other person on this damn planet and most of the people from his own. She reminded him—a little bit—of Beren. It was the optimism, their never-ending ability to light a candle in the darkness. She and Beren would have meshed like two delicate spiderwebs, coming together to create something stronger and more beautiful than before.

Fillie was apparently a jack of all trades, welcome everywhere she went. The botanists let her into their lab without a hitch, and she towed Cas from plant to fungi to slime, finally finding Lieutenant Pelshar again. The lieutenant greeted them enthusiastically.

“Beren!” She motioned him over to the box she stood in front of. Its walls were completely opaque, but she was looking through a device set in front of it. “Excellent timing, I think they’re about to spore! The bioluminescent mushrooms we talked about last time, the ones I was having trouble replicating—the advice you gave me about the proper nutrient base for them has worked out perfectly. Come and see.”

Cas rounded the table to stand beside the Lieutenant, who stepped away. “Look!” He looked into what seemed like an oversized set of goggles inset in a stand, and—

Oh. “Beautiful,” he murmured without even realizing it. “They’re perfect.” They looked just like the mushrooms that had sprung up near the midden piles in the caves.

“And they’re almost genetically identical to Old Earth mushrooms, which—this is one of the most impressive examples of parallel evolution I’ve ever heard of, especially across such incredible distances. It’s astonishing, really. Or it might be possible that the spores actually traveled through space from one location to the other, which would be even more amazing.”

“No wonder you’re in raptures,” Fillie teased her. “You’ve got something new to publish about.”

“Or not,” Lieutenant Pelshar said with a frown. “All data from the mission is still classified, and we can’t release any of it to the public. It’ll be a long wait to see whether or not they decide to open at least the scientific surveys up for publication and research, but…” She sighed. “It’s not as though we don’t have plenty of other things to work on here. The biologists think they might have identified a completely new type of parasite!”

“Yeah, it was passed along from Medical, something they took from someone’s blood—what’s his name—it doesn’t matter. Anyway, the sample wasn’t still alive, of course, but they did a genetic analysis and are coming up with some fascinating data on its potential mutability.”

“Yeah. Not, again, that they’ll be able to publish anything at this point, but—”

“Lieutenant!” one of the techs called out. “You better get over here. We can’t access the backup drives.”

She frowned. “That’s not possible. They automatically disconnect from the mainframe whenever there’s an incident. They should be reachable through the secondary devices.”

“Not this time.” The tech sounded grim. “And the central data drives coming back online look patchy.”

“What?” She glanced at Cas and Fillie. “Excuse me, I’ve got to handle this.”

“Of course.” Cas watched her go, agitation evident in her steps, then murmured, “We should probably leave.”

“Right.” They left the lab but didn’t go anywhere once they hit the hall. Fillie looked pensive. “It’ll be terrible if the data they collected is lost. Even if it isn’t completely gone, it might be so badly compromised that it isn’t useful.”

“—too much and you know it—” Cas could make out with his enhanced hearing before a gesture from Rone silenced him.

“All finished?” Rone asked, drawing to a stop in front of them. His face was smooth and unconcerned, despite the rising chaos in every department around them.

“Botany is having some issues, sir,” Fillie offered nervously.

“Engineering is on it,” Rone soothed. “They’ll be around to help set things to rights as soon as possible. What are your orders for the rest of the day, Private?”

“Good. Come home with us, the kids miss you.”

Her worried look vanished under fresh pleasure. “Thank you, sir!”

Rone turned his focus on Cas. “Ready to go?”

“Absolutely.” He was more than ready to be out of there, to wipe this whole strange morning out of his head. Cas had never been a big believer of coincidence, but he was feeling the squeeze of time and circumstance on all sides now. He had to take some things on faith, and since Rone seemed supremely unconcerned, he would let himself be too. “Let’s go home.” He wanted to see the kids—it was strange, to miss them so quickly.