Notes: Hail hail, the king is here. Next up we meet the kids. Who do you think is going to be the tougher sell for Cas? *hint--I have a child but no king, so I'm sure you can tell which way I'm leaning* 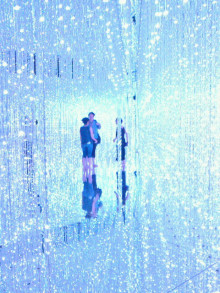 Cas walked out of the hovercraft and into a place he could never have imagined, a place that the few pictures he’d seen in documentaries didn’t do justice to. It was—the light was—the light was everywhere. Everything around them, from the landing pad the hovercraft had finally settled onto, to the high walls of the walkway, to the vast circular room ahead of them, radiated light. Cas felt like he was going to go blind, and had to use the phage to dial back how much of the display it let register in his eyes. He winced for form’s sake, and Rone squeezed his hand.

“It can be a bit intense at first,” he said apologetically. “But it’s the traditional atmosphere for greeting. The sensors will tone things down once we get into the audience chamber.”

Feeling like you’re standing in the center of a star is the traditional atmosphere for friendliness? What do you do when you hate someone? The complaint was on the tip of his tongue, but Cas bit it back. There was no way he’d let anything but appreciation out of his mouth while Lord Freyne was around, not to mention the who-knew-how-many other Imperians with enhanced hearing or surveillance devices not visible .

“Speaking of getting to the audience chamber,” Lord Freyne said drily. “I suggest your husband save his gawking and get moving. You wouldn’t want to keep the king waiting, after all.”

“When my brother brought Tiyana here for the first time, she spent a full ten minutes standing around with her mouth open. I think he’ll be understanding, given the circumstances.”

“No, it’s all right,” Cas said quickly. He didn’t want to prolong the eyestrain any more than necessary. “Let’s go.”

Rone led the way, just slightly ahead of Cas, almost like he was shielding him. Cas wasn’t sure what he might be shielding him from until he heard the voices beyond the walkway, on the other side of the brilliant, burning light. They were being watched right now, observed like bugs in a glass, or prisoners behind bars. So there were watchers. This was probably prime theater for them.

Rone had to know about this. He probably hadn’t told Cas because he didn’t want to increase his self-consciousness, but it helped to be aware. He stood tall and kept up with his husband all the way down the walkway, until they entered the audience chamber and walked up to the throne in the center of it. Throne—that was what these ridiculously large, ornate chairs were called, wasn’t it? This one was fairly low to the ground, making the king appear to be lounging in it, the way his legs stuck out. Or perhaps he was simply too tall for it? He was a massive man, easily Rone’s height or more, and wider through the chest—or perhaps that was more about disguising the bulk around his waist. He gleamed in shades of red and gold from head to toe, heavy with fine cloth and rubies the size of Cas’s eyeball.

They got to the dais, where Rone stopped and bowed low. Cas bowed with him, and behind him he heard the rest of their entourage do the same. “Greetings from your lowly servants, honored majesty,” Rone said.

“And to you, brother. Welcome back from the darkness into the light.” That seemed to mark the end of the rote responses, because a moment later the king said, “Now get up here and explain what you’re doing married, of all things. I thought I sent you on a damn mission of mercy, not a couple’s retreat.”

Rone laughed, and it sounded genuine, but Cas was immediately on edge. He could hear things in this man’s voice, his tone, see it in the way he lolled about and waved his hand, and it was strange. Dichotomous. Did this bode well or ill?

It didn’t matter—it was time to be introduced.

“You’ve known about Beren for the last week, don’t pretend to be surprised now,” Rone scolded his brother lightly as they ascended the dais to meet with him face to face.

“Knowing is one thing, seeing is another.” King Amiru got to his feet, and—yeah, the man was tall, about an inch taller than Rone. Goodness. “And you wouldn’t even send me a picture of the young man. I had to rely on other sources to get me that intelligence.”

Interesting turn of phrase. Cas made sure to smile shyly when Amiru focused on him.

“Welcome to Imperia, little brother.” Amiru’s tone was friendly and informal—perhaps too informal, given the setting. Was it an open sign of disrespect? Ugh, why were there so many useless social conventions associated with Imperians?

“Thank you, your majesty,” Cas replied, keeping the title in there—it was one thing for the king to call him brother, quite another for him to respond in kind.

“You must be quite something, for Rone to have latched onto you so quickly.”

Like a parasite. Cas fought down a sudden urge to laugh. “He’s been very good to me.”

“Hmm.” Dark eyes roved over Cas like knives, as though they could peel away his secrets along with his skin. “You were attacked back on Leelinge, weren’t you? Some sort of animal?”

What was this all about. Was he delving for more, or just making small talk that his court would find titillating? “I was, but Rone killed it before it could damage me.”

Cas knew he wasn’t imagining it when he saw the king’s breathing pause for a moment, and felt Rone’s matching burst of tension through his arm. What had he said? What was wrong with acknowledging the truth—pretty much the only truth he’d told so far?

“How heroic,” King Amiru said at last. “I look forward to hearing more about this daring from the source itself, but for now we have a family dinner to attend. My children can’t wait to see their uncle again, and of course—” he turned back to his brother “—your own children are anxious to have you back.”

“They’re already in the palace?” Rone’s tension ratcheted higher. “Who’s with them?”

“My wife picked them up this morning, brother, relax.” Amiru clapped Rone’s shoulder. “You worry too much.”

He clearly had a reason to be worried. Cas was determined to run down exactly why, because if childcare was going to be on his list of duties then he was damn well going to be prepared.

“Delighted, cousin.” His voice was heavily sarcastic, but the king just laughed.

“I’m sure you are.” He looked pleased with himself. “It’s going to be fun having you back, Rone. I can already tell.” He glanced at Cas, then back at Freyne. “Amusements of all sorts are presenting themselves.”

Cas sighed internally. To quote the idiot behind him: Delighted.

Oh well. At least he was about to meet Rone’s children. That charm offensive was more important to him than amusing or impressing a cryptic king. The more invisible he was to Amiru, the better for him.

The more appreciated he was by the children, the better for everyone. And how hard could a child be to win over?
Posted by Cari Z at 9:34 AM