Notes: This ended up being a little shorter than I intended because SOMEONE decided to cut her nap short, but it still works. Enjoy! Please vote if you're in a state holding elections today! 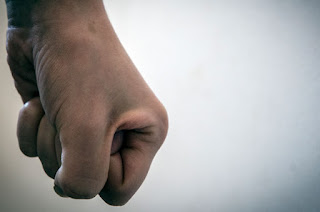 There was a strange, almost seductive sense of shame in cleaning up after his act of self-pleasure. It was a new feeling for Cas—taking care of his body’s needs was just another chore to be done, like monitoring the phage or keeping his senses sharp for signs of an assassination attempt. This time was different, though. He’d done it in bed, in his bed, the one he was supposedly sharing with his husband if their hours ever coincided. He could imagine Rone’s body next to him, watching him, taking care of the mess himself in a dozen different ways. It was…compelling. Cas needed to stop thinking about it.

A quick shower took care of the gunk on his face and body, and by the time he stepped out of the spray—hot water, amazingly hot, he’d thought they’d be consigned to something less decadent and more efficient on board a ship—his Beren face was back in place. The phage practically purred under his skin, rejuvenated by the rest and the pleasure.

“Calm down,” Cas muttered to his reflection as he dressed in the bathroom. He was blushing—he shouldn’t be blushing. Fucking thing. Sometimes he wondered how deep into his neurology the phage had penetrated, whether it had any sense of his own ideas and inclinations. The fact that it had responded so strongly to Rone in the past—he needed to get a handle on that. He couldn’t afford to be compromised by his own body. He needed to be in control when he went after his husband.

An hour after he woke up, almost exactly on time, Rone entered their quarters. His jacket was off and his face looked a little tired, but he still smiled to see Cas waiting for him in the living room. “Hey. How was your day?”

“Uneventful,” Cas confessed. “I ate with Private Fillie, then…it’s kind of embarrassing, but mostly I just slept. My body has a lot of catching up to do, apparently.”

“I see.” Was it his imagination, or did Rone look a tiny bit disappointed? “Well, if you’re ready for another round in the mess hall, we can head out as soon as I’ve cleaned up a bit.”

There was an opportunity here, for both information and intimacy, and Cas didn’t want to squander it. “Actually…do you mind if we eat in the room? Just us, together? I’d be happy to go and get the food while you shower.”

Rone’s little smile was back. “I think that would be great, but there’s no need for you to go and get it, Beren. The mess hall delivers.”

“Whatever the cook has on special.” He shrugged his broad shoulders. “I’m not picky.”

“Okay.” Cas stood up and laid his hand briefly on Rone’s arm, then headed for the door. “I’ll be back soon.”

Cas left and walked the short distance to the mess hall, letting his phage fill his skin and send back information that he hadn’t been able to get for a while. Vibrations to the left—three people coming down the hallway. To the right, a change in the air pressure, very faint—a door opening and closing, probably the one that led to the bridge.

Once he stepped inside the mess hall, which was packed as people came off shift, every hair on his body seemed to quiver as he became the center of mostly covert, but occasionally overt, attention. Cas ignored it and headed for the line, getting into place behind two crewmen whose red uniforms looked a little shabbier than the norm. They smelled differently too—some sort of lubricant. Engineers? Technicians? He needed to learn the rank insignia yesterday.

The cook handing out food was pleasant and proper enough, verifying that Cas was getting plates for two and giving him an extendable tray to carry it on. He smiled his thanks but kept his ears open and his senses extended, listening to the conversations around him. A few were benevolent, but most of them were…not.

“Can’t believe he married that—”

“The children were bad enough, but now—”

“It’s an insult to the monarchy! The king is going to—”

Ah. It seemed like the xenophobic bent in the Imperian troops went beyond one overly-aggressive nurse and a few soldiers who tended to be loud. Speaking of loudmouths, though, Cas felt a vaguely familiar presence sneaking up behind him, probably with the intention of running into him. For fuck’s sake, what was this, a childcare facility?

Cas let the man get close enough to reach out, who seemed intent on making his deliberate tumble look like a bump, before suddenly sidestepping to the left, spinning out of the way and bringing his food with him. A second later not a morsel on the plates was out of place, but the man who’d tried to ambush him—and Cas recognized him now, it was the one who’d extolled to his friends back on Leelinge about how refugees should be grateful for whatever they got—staggered forward, catching himself on the counter at the last minute.

He turned and glared at Cas. Cas stared right back, unyielding. Beren might be nicer than him, but he didn’t like bullies and he could be vicious in a fight. “I grew up in the dark,” he said softly. “You think I can’t tell when someone is coming at me in the light?”

“You’re a freak,” the man hissed. Cas glanced at his badge—Private Grenier. “All Delacoeurians are. You shouldn’t be here. You don’t deserve to be here.”

“James,” another soldier cautioned from a few feet back. “This isn’t the place to—”

“Shut up, Aleks! This is exactly the place!” He stepped in close enough for Cas to feel his body heat and smell the stench of alcohol on his breath. Someone had been drinking on shift, interesting. “You should have died on your planet,” he said. “Some win, some lose, and your people were fated to lose. Captain Basinti is too soft to understand it, but the king knows. He sees the destiny of all people. Imperians are meant to rule, and your kind? You were all meant to die, and someday soon, you will.”

“James!” the other man—Aleks—snapped. “You’re being recorded, you fucking idiot!” He grabbed James’s arm and pulled him back. “I apologize for him,” he said stiffly to Cas. “He’s having a hard time adapting to space after so long on the ground, his biorhythms are way off. I’ll take him to the infirmary.”

“You do that,” Cas replied. He looked around the room. Two more people were on their feet, ready to intervene, but they looked angrier at Private Grenier than at him. Molson and…Yeun, good to know. He might engage with them later, but for now, he had a husband waiting to be fed, and a whole slew of questions to ask him. “Enjoy your meals,” he said politely, then left the mess hall.

His coming conversation with Rone was about to be a lot more interesting than Cas had originally planned.