Where Death Meets The Devil

Okay, I don't often do posts about other people's stuff (I've done more recently, but only because folks have asked nicely) but even if I hadn't been asked, I would still have wanted to post about this book. It's just...okay, put yourself in my shoes. You like thrillers. Suspense. Badasses. Assassins. Explosions, gun fights, car chases, doublecrosses, heroes getting their asses kicked (then saved), adorable pets (in this case, a camel, and not really a pet, but the point remains), etc. This book has them all. AND I LOVE IT! 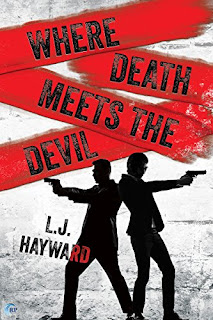 Plus, it takes place in Australia. I want to go to there...I might skip the trekking-across-the-desert part, though.

Look, you know me, you know what I like in my own writing. This books has all that stuff and more. It's beautifully plotted, complex, emotional, fun, sexy, surprising...I just really enjoyed it.

So! Now you know how I feel. Have a blurb, read for yourself.


Jack Reardon, former SAS soldier and current Australian Meta-State asset, has seen some messy battles. But “messy” takes on a whole new meaning when he finds himself tied to a chair in a torture shack, his cover blown wide open, all thanks to notorious killer-for-hire Ethan Blade.

Blade is everything Jack doesn’t believe in: remorseless, detached, lawless. Yet, Jack’s only chance to survive is to strike a bargain with the devil and join forces with Blade. As they trek across a hostile desert, Jack learns that Blade is much more than a dead-eyed killer—and harder to resist than he should be.

A year later, Jack is home and finally getting his life on track. Then Ethan Blade reappears and throws it all into chaos once more. It’s impossible to trust the assassin, especially when his presence casts doubts on Jack’s loyalty to his country, but Jack cannot ignore what Blade’s return means: the mess that brought them together is far from over, and Ethan might just bring back the piece of Jack’s soul he thought he’d lost forever.