The Tower: Chapter One, Part Two

Notes: On to Part Two! I hope you enjoy it, I'm having a great time wrestling with this mystery. The plot thickens... 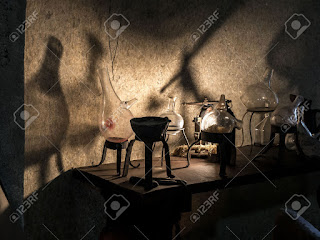 “Englishmen?” Anton was taken aback. “Whatever for?” There might be a fair number of his fellow citizens scattered across Zürich, but they were still a tiny minority in such a large city. Most of them were merchants, or students like himself. “Do you suspect the Dévoué?” The Dévoué were a sect of rabid nationalists, intent on breaking apart Napoleon III’s empire and reestablishing separate, sovereign kingdoms.

It was a member of the Dévoué who had been responsible for the death of Viscount Bonaparte, and in charge of the train on which Anton himself had nearly been killed more than once. It was a member of that sect that had composed a magical palimpsest that Anton was still working on translating, which contained a spell that would imbue weapons with the ability to ensure death once they were wielded.

He still had nightmares about those weapons—the gun that never missed, the knife that once unsheathed would not be put away until it had killed. Anton—and Camille—had been the targets of both of them, and it was only through sheer luck that they had survived. Such a spell would obviously be brutally dangerous in the wrong hands, and Anton had been more than ready to give the palimpsest up to Camille, but the lumière had entrusted it to his keeping instead. In deciphering the spell, they might learn how to defeat it. Or such was Anton’s hope, at least.

“It is possible,” Camille allowed, a frown creasing his brow and drawing down the edges of his moustache. Anton tried to watch him a bit less raptly, but it was hard. Camille had been a constant presence in his mind ever since Anton’s arrival in Zürich, the first man—first person, really—to get his attention and hold it, and one of the few men to openly praise his thaumaturgical skills. That he was tall, broad-shouldered and appealingly attractive were other marks in his favor. It would not be a lie to say that Anton drove himself to distraction with his work, in part, because it was better than fruitless pining.

“Possible, but if so, it is a very targeted attack,” Camille continued. “The English are no allies to Napoleon, despite the truce between our empires. Probably the only reason your leaders haven’t come out in open favor of the Dévoué is fear that such rebellion would spread to your own colonies. That does not mean that there aren’t covert actions being taken to strengthen dissent and weaken the hold of the crown.”

Anton was confused. “So then, it is spies who are being targeted? Could the killer be one of your fellow lumières?”

Camille shook his head. “Not that I know of. And as for who is being targeted, well, that is very odd. Four men have died so far, each of them relatively new to the city. They are largely solitary individuals, not members of established groups, and all of them have shown varying levels of talent in thaumaturgy.”

Now it was Anton’s turn to frown. “What do you mean by that? Are you speaking of formal masters or priests, or students, or is it street magic?” Street magic was what those who were born with more ability than most to effect thaumaturgy but without the means for a proper education, resorted to in order to hone their skills. Street magic was an unpredictable mirror of formal thaumaturgy, cut with poor ingredients and improper alchemical equations. Street magic could be immensely powerful when done by the right practitioner, but more than half who tried anything more complicated than a simple locator or resonance spell ended up hurting themselves, or even dying, from backlash.

“A combination of all, actually. One man was a journeyman thaumaturgical locksmith, employed by one of the banks. He was quite proficient within his own sphere, but knew little beyond it. Another was a priest, again a young man, stopping here to continue his study of religious architecture. The final two were street mages, one specializing in keeping away vermin, the other a finder.”

“A finder?” That was a rare skill to develop, especially for someone with an inferior education. “He must have been in high demand.”

“And he took the longest to die,” Camille said grimly. “All four of these men were killed over the past two weeks, all four of them tortured before having their throats slit. Whatever their murderer was looking for, it seems that he or she hasn’t discovered it yet.”

“How has none of this appeared in the papers? Why haven’t I heard of it before now?”

“The margrave of this canton has taken pains to conceal the deaths, putting the bodies in holding as they appeared. He requested a lumière to look into the matter, and thus, here I am.”

“You said you would allow no other to take it up.” Anton felt his face heat, and was grateful for the dim light in his laboratory. “But you haven’t yet said why, other than the fact that these men share my origin.”

“It is more than that. All young men, all arriving three months ago, all thaumaturges to some degree, all tortured to death. Do you not see the common thread?”

Anton frowned. “Other than what you’ve already laid out?”

“In addition to it, perhaps. Anton,” now Camille laid his hands on Anton’s shoulders and looked him straight in the eyes, “they are all of them quite similar to you. I kept your true identity hidden after the debacle on the train, but not everything could be concealed, including the truth that you were not, in fact, Consul Hasler, once the discovery of his body had breached the gap from Paris to Zürich.

“Puzzle pieces were put together, pieces I should have tried harder to eradicate, but there was so little time. It became known that you were English, that you had training in magic, and that you were also in possession of something very valuable. Something that a member of the Dévoué, or an unscrupulous lumière, or even an enterprising freelance spy or assassin would gladly kill to obtain.”

Anton felt the blood drain from his head. “The palimpsest.”

“Indeed. The ability of those weapons used on the train was not easily covered up, and with the revelation of Consul Hasler’s own skillset, well.” He shook his head. “It would be quite a prize.”

“Do you think it’s a lumière?”

“No,” Camille replied swiftly, which was something of a relief. “I know most if not all of my fellows, and while all of us are dedicated to justice in the name of the emperor, we are no less dedicated to finding the truth in ways that result in little collateral damage. Whoever the murderer is, they don’t care about leaving a trail of bodies to get what they want. There was another death.” He sighed. “The landlady of the locksmith was found in her front room, her throat slit before she had a chance to cry out. Her body, unfortunately, could not be held. She has already been buried.”

Anton felt dizzy. He gripped Camille’s forearms in an effort to keep himself upright. “What…what shall I…what do I…”

“Stay calm,” Camille advised. “Here, sit down now.” He led Anton over to his bench and knelt in front of him, chafing his arms and shoulders gently. “Breathe in slowly, there you go. I should perhaps have gone about telling you a bit more diplomatically,” he added, his voice rueful.

Anton chuckled weakly. “It would be hard to couch this in truly diplomatic terms, I think. Someone is murdering innocent people in an effort to kill me.”

“I wish we had burned that bloody book.”

“It would not have mattered,” Camille said quietly. “Someone would have come looking anyway. I’m sorry I involved you so greatly in the matter on the train, Anton.”

Anton met Camille’s concerned gaze. “I’m not.” He exhaled, some of his tension finally draining from his limbs. Unfortunately, the loss left him feeling sluggish, but such fatigue would tell one way or another. “So, what happens next? I haven’t finished translating the palimpsest, although I am more than halfway through it.”

“A lot of threads that make no sense independently, but a tapestry is beginning to emerge. Once it is completely unraveled, I shall make a full study of it.”

“And where is the book now?”

Camille paused, then nodded. “Better that you don’t tell me, just in case.”

In case you are captured and tortured and…and… Anton shook his head in an effort to clear it. “How else can I help you?”

“I am not asking you for your help,” Camille said at once. “I am not well known in this city, and most never see me at all, but if I were discovered as a lumière and you were with me, it would throw suspicion onto you. The last thing you need is to be set apart in such a way.”

“I cannot sit idly by while you work on this case!” Anton objected. “People are dying, people who have the bad luck to share a few things in common with me. I am a forensic thaumaturge, and you have access to their bodies. You must at least let me help you to see their death miasmas.”

“It still puts you in harm’s way.”

“Camille.” Anton patted his shoulder. “You tell me I am already in harm’s way. Hastening the speed of your investigation shall only lead to a quicker resolution. Besides, there are some tricks I can employ to reduce my own visibility. Let me help you.”

Camille crouched in silence for a long moment before abruptly getting to his feet. “You have the devil’s own ability at persuasion,” he said. “Fine. But only if you take those precautions, and only if, when I tell you to leave me, you go without hesitation. I would never willingly risk your safety.”

“But you would risk your own.”

Camille shrugged. “Such is the life of a lumière.”

Well then. Neither of them were perfectly happy, but at least Anton was not entirely shut out. He pushed to his feet and was relieved to find himself steady. “When do we start?”
Posted by Cari Z at 11:31 AM