Notes: Let's visit with a less familiar face these days, huh? It's time to do some digging. 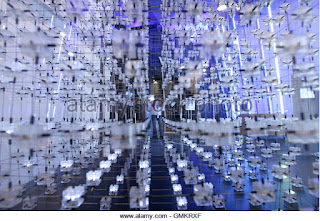 The campus of the Academy felt disquietingly empty. Unprecedentedly empty.

It wasn’t that cadets had never been called to war before. The last time was nearly fifty years ago, but Sigurd could still remember the effects of that battle, even though he hadn’t been an admiral back then. That was the battle that Foster Alexander had truly made his name in, as a military commander and a leader. His family’s fortunes had risen ever since, continuing even after his death. Or, at least they’d risen for one member of the family.

Sigurd settled back into his chair and closed his eyes, thinking. He’d dismissed his staff—there was no sense in keeping around a host of schedulers and secretaries and professors when there was no one around to mind or corral or teach. He was alone in the central office building for the first time in…perhaps forever. Which was just as well, if he was going to be reviewing classified messages from Garrett.

The message began to play.

“I spoke to our ghost. She confirmed what I’ve suspected—narcissists with God complexes tend to keep their plans, and their resources, to themselves. I was worried we’d be dealing with a massive conspiracy, and there’s plenty of blame to go around for inaction and bad action, but when it comes to funding we’re looking at just one credit stream: Raymond’s. The ghost receives a yearly stipend from him to keep herself in style, but doesn’t have any access to the family fortune. She’s not allowed to make private investments, or make extra money off her own talents. She gets a brief financial breakdown each year of their holdings, but it’s nothing not available to the general public.” Sigh.

“I’m still working on tracking down how he’s paying for a war on the Fringe, but when it comes to who, I think you’re better equipped to go digging. Look at the specs I’ve sent you for the ships out there. We can’t get audio transmissions, but think about who could be manning this effort. This is about more than monetary policy, that’s not going to square with a lot of people. The ones he’s got playing pirate and attacking Pandora are good at what they do. Most places they’re hitting and running before we can get out there to properly investigate or counter; Pandora’s holding out because of a repulsion energy shield, but if they’re keeping at it then they’re organized.” There was another pause, this one accompanied by the sounds of Garrett’s hands in his hair, then sliding down over his face.

“Find me his captains. People who went through the Academy, people in positions of command who’ve either been dishonorably discharged, retired under suspicious circumstances, or gone rogue. I need to know who’s in charge if I’m going to know where to hit them. Tell me as soon as you find something solid.” The transmission ended.

Sigurd didn’t need to watch it again to see Garrett’s slow but inexorable decline—he could hear it in his voice. He wasn’t taking care of himself, but he wouldn’t, not yet. Not until he had taken care of Raymond Alexander, and Sigurd wasn’t in any position to step in and chide him. They didn’t know each other well enough, and he couldn’t risk estranging Garrett. The best he could do was help things along to a rapid and satisfactory finish, and get everyone back where they belonged.

“Mercury, cross-reference all Federation forces’ dishonorable discharges for the past…” He considered the timeline, when Raymond had come to power and how. “Fifteen years with notable associations, political, monetary or social, with President Alexander.”

“Remove those not working in a command capacity.”

“Known associations with each other?”

Of course. The Hunter Massacre was the biggest black eye the Federation had sported in the past two decades, and it was entirely the result of over-eager, gun-happy officers deciding to take a nearby colony’s environmental emergency into their own hands. The Hunter expedition had been a colonizing effort that had gone wrong fast: the weather was too unpredictable, the crops were unable to grow as fast as they needed to, and those that did grow had carried pathogens that had taken weeks to manifest in the nervous system, but when they did—seizures, fainting spells, and memory loss for the mildly afflicted. Complete loss of mental and physical control for the moderately afflicted, including a predisposition to lash out at their surroundings for no reason.

Their medical staff was under-prepared to deal with the fallout, and requested Federation aid. Three ships had gone with supplies to take care of, and possibly evacuate, the colony. Less than a week later, they’d opened fire on the habitat from space, obliterating it and all its residents, as well as destroying one of their own ships, which had been the one actually spending time on the ground. Their rationale had been absolute bedlam in the colony, irreversible medical effects and the potential for spreading disease among their crews.

An investigation had proven that not only was the illness non-transferrable—you could only get sick if you ate the food—but that there had been significant disagreement among the leadership as to what course of action was best. The man in charge, Vice-Admiral Orwell, had insisted upon separation between his crews and the afflicted. One of his captains and all his medical staff had complained, and in the end, it was that captain who took her ship down to actively provide assistance. His response had been swift and deadly. Three hundred and twenty-one Federation officers were killed, and almost nine hundred colonists.

The hell with a dishonorable discharge, the man should have been court-martialed and thrown in prison for the rest of his very long life, but his trial was overshadowed by the sudden deaths of most of Raymond Alexander’s family. The news cycle churned on, and probably due in part to his long service and in part to the skeletons he could unbury if he needed to, Orwell and his officers were spared. They would never serve in a reputable navy again, but apparently they’d found a very disreputable one to lay claim to.

“A think tank that specialized in population control, a defense contractor, and a weapons manufacturer.” How unsurprising. “Correlations with any Alexander holdings?”

That didn’t mean they didn’t exist. “Flag those corporations and dig deeper, using any of the extended Alexander family names.”

“Processing. Complete. Substantial investments in all three companies under the name of Evan Hardwick, Haven Alexander’s brother. Evan Hardwick has been deceased for twelve years.” Haven was Foster Alexander’s last wife, and had died at the same time he had. Her brother had passed away the following year in a shuttle accident, but before that he had run his own investment corporation. There had been a lot of dark money flowing through those channels, but it all should have ceased on Evan’s death. He had no children, and had kept a much lower profile than his sister. To use his name meant whoever was behind this—and Sigurd didn’t have to wonder too much about that—hadn’t been in a position at the time to act without it, but had been in a position to hide the illegality. Interesting.

“List all available monetary actions by Evan Hardwick in the past twelve years.”

There were over a hundred actions listed. Sigurd flagged them to be sent on to Garrett. “Correlate actions with any associations with Orwell.”

It didn’t stop at the three companies the computer had found before. If what he was looking at was true, President Alexander had been bankrolling Orwell ever since his discharge, and a lot of that money had gone into subtly-veiled construction. Some of those contracts had even gone through the military—bits and pieces of things, more little threads to pull that might lead to the revelation of an entire fleet of ships made by a thousand different hands, all of them pulling their creations into a dark void of secrecy.

Well. That couldn’t be allowed to stand. “Bundle this information and send it to Peacock. Highest level encryption. And recall my staff. I’m going to pay a surprise visit to the construction docks this afternoon. We’re going to get some records pulled.” The docks’ accounting system had a private server that he couldn’t access from here. Once he was on site, though, he should be able to get his hands on their raw data. A surprise inspection should do the trick, and if he had his staff run interference for him, a few minutes alone was all he needed.

“The docks are off-limits to all visitors without prior authorization by the Admiralty.”

“You will be challenged.”

“They’ll let me through if they don’t want to be court-martialed.”

“Your time there will be limited.”