It's heeeere! And it's so beautiful. 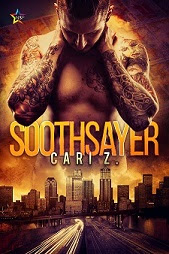 Cillian Kelly can look into people’s eyes and see their fates. He’s running from a past filled with mistakes, lying low and selling his services on the sly. When he learns that Sören Egilsson, a man who sacrificed himself so Cillian could escape imprisonment two years ago, is somehow still alive, Cillian has to find out how. What he gets is the body of the man he loves possessed by an ancient spirit who draws Cillian into a battle to the death for the right to control Sören’s fate, and the power that comes with it.

You can find it at the Nine Star Press website and on Amazon:

Right, so, I know a lot of my blog people have read this before. Yes, it's the story I wrote here. It's been spruced up, edited to within an inch of its life, and I've included missing scenes in the blog tour, so if you follow along you'll get more info and a peek into the future.

Sequel potential? Like, say, what happened in Vegas and what will happen if Cillian has to go there again? Yes, yes, and yes! Check the book out, and if you're interested in more let me know! The more people reach out to me, the higher the probability I'll write the next piece of Cillian's story.