Notes: This is for my poor sick darlin', who needs something happy in her life. Have some Cody and Ten! 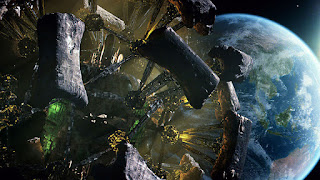 Sometimes, in dreams, Cody thought he relived his early childhood on a Drifter ship. He would walk down endless, twisting corridors made from mottled patches of metal, rusty scraps scraped just clean enough to catch a bond with newer polymers. Sometimes he was running toward his father, sometimes he was running away from other people, but Cody was never still when he dreamt of Drifting. He and his dad had left the clan when he was only five, but occasionally he would catch a whiff of burning solvent or thick, ancient oil and stop in his tracks, his head turning to track the smell despite himself.

Cody knew that leaving had been better. He’d been a liability on a Drifter ship; his dad had never said it, but Jack had uncomfortably intimated as much more than once. Kids who couldn’t heal fast were burdens, and nobody had time to take care of a burden when you were expected to start working as soon as you could walk. Instead, Cody and Jonah had made a new family with Garrett, and Cody wouldn’t trade it for the world. Still, there were times when he felt like a bird trapped not in a cage, but underwater, in a place it shouldn’t be able to survive. He couldn’t be a Drifter because he was a natural, but he would never really fit in with the glitz and glamour that came with Garrett’s lifestyle either, for the same reason.

Ten, on the other hand, would thrive anywhere. It was evident from the moment they caught sight of the enormous Drifter ship, well beyond the orbit of Olympus, where it would have had to pay docking fees. Jack eased them in toward what sort of, kind of looked like a port that would work for a little skip ship like his, and Ten actually twisted hir head to follow the motion. “How will we—oh, of course, at an angle. So you can cluster ships around a central intake. Clever. Very ungainly, but clever.”

“Don’t matter how elegant you look when all you’ve gotta worry about’s livin’ in space,” Jack muttered as he delicately guided his craft into the cradle. “No gravity to break you down. Now look, this skipper’s mine, but that don’t mean other people ain’t gonna come in here. You got a way of locking that bike?”

“Why don’t we just stay in here?” Cody said. He already felt like his skin was crawling at the thought of going onto the enormous ship. So many people who he didn’t know, who hadn’t wanted him…

“Can’t contribute as easy when you’re out of the way,” Jack said. “’Sides, everyone’s gonna want to see you. I’ve been talkin’ you up for a while now.”

Jack clapped Cody on the shoulder. “Let me worry about your Grandma.” The little ship docked with a faint clunk. “She shouldn’t kick up too much of a fuss. Like I said, we’re headed there anyway. Just makes sense to take you with us.”

Ten was frowning. Cody cut in before ze could say anything to Jack. “Thanks.”

“I’m going to lock the bike,” Ten announced. “Cody, come with me so I can show you the code.”

Cody frowned, but followed Ten back to the storage bay of the ship. “There is no code,” he pointed out once they were alone. “It’s DNA-keyed, I remember because you pricked my finger for hours before you got it to work right.”

“You’re not going to freak out on me, are you?”

“You aren’t going to suddenly decide that you wish you had been a Drifter all along and dive into assimilating their culture and forgiving them for all the awful things they did to you just because you’re lonely and looking for a connection?”

Cody parsed Ten’s breathless question out bit by bit. “Okay, first off, I’m not lonely. I’ve got you.”

Ten rolled hir eyes. “What about when I’m not enough for you?”

Cody actually laughed. “When have you ever been not enough? Do you even remember our time on Perelan? Who was the one who took time out of hir busy schedule to come back inside and do martial arts that I know you hated with me?”

“I don’t hate them, I just find them inefficient,” Ten defended hirself. “There are so many more practical ways to prevent someone from messing with you. Poison comes to mind. A mild poison,” ze amended when Cody raised his eyebrows. “Just enough to make them fall down and not be able to get up and exact vengeance, which would give you time to really make them regret it.”

Well, that sounded disturbing. “Do you actually have something like that?”

“We’re getting way off subject here.”

“Right.” Cody took a breath. “I don’t wish I was still a Drifter. I might sort of wish I’d been able to find a place here when I was a kid, but I didn’t. They didn’t want me, and they didn’t give my dad much of a choice, and we left and it was the best thing for both of us. I wouldn’t have met Garrett otherwise, which means I wouldn’t have met you, and I can’t imagine my life without either of you.”

“And I do want to assimilate as well as I can while I’m here, but I don’t really give a fuck whether they like me or not as long as they get us where we need to go. My dad is what matters now, not me having a bunch of friends. I don’t need to make friends anyway, I brought my own.”

“Ha,” Ten muttered. “You mean I brought myself, that’s what you really mean. And it’s a good thing I did, because—”

“I know,” Cody said. “I already know. I always know exactly how lucky I am whenever I’m with you. That’s how I feel, okay? We’re here and I’m going to be polite, but the only person whose approval I need is yours. Got it?”

Ten’s mouth silently opened and closed a few times, the way it often did when ze was trying to think of a way to be verbally affectionate that didn’t make hir also feel over-exposed. Cody took pity on hir.

“Let’s say it’s done and get back out there, okay? We’ve got some meeting and greeting to do, I bet.”

“Right. Yes.” Ten’s hands twitched, but ze kept them at hir side. “You’re still in uniform. We both are. Should we change?”

“Why bother? If they can’t handle us like this, they probably aren’t going to be any better if we’re in civvies.”

“Who would ever have thought that of the two of us, you’d be the one to screw convention?”

Cody took Ten’s hand and smiled. “Can’t have you getting bored. Come on.”

It turned out, the term committee was a drastic understatement. There had to be fifty people waiting for them in the little docking bay once they were out of the ship. Jack swore quietly. “Let me do the talkin’, okay?” he murmured to Cody before stepping forward to face a woman with short, storm-gray hair and a face like an angry walnut.

“Explain a pair of strangers on board my ship?” Her voice was as dry as dust. “I’d hope so.

“Cody’s been a stranger since before he was born.” Cody was really glad he was holding Ten’s hand, because it was oddly comforting to feel Ten’s nails dig into the back of his palm with barely-restrained emotion. It was nice that he wasn’t the only one.

“He’s got news about Pandora. He needed a lift there. Ain’t like we don’t have the space.”

“And what makes you so sure we’re still headed that way, eh?” she taunted him. “Why not find an easier drop for our goods?”

“Because the price on Pandora’s the best for five systems and you know it,” Jack replied. “You ain’t gonna give up that kind of profit without a fight.”

“Don’t mean we need useless people on board, taking our resources without giving anything back.”

“They’re mechanics. Engineers. They can work on the ship, get some of the dark parts lit up again.” Jack was incredibly persuasive when he wanted to be, Cody had to admit. “And they’ve got credits to pay their way.”

“Credits only spend on Central planets, and we don’t deal in places like this for long.” She glared over Jack’s shoulder at the two of them. “Or with people like them.”

She glared at Jack. “Keep this up and your word won’t be worth the price of space junk.” She turned to shout at the watching crowd. “Get back to your stations! I want the stench of Olympus out of my nose before another hour passes! Get us up to speed toward Pandora.” She turned back to Jack. “As for them? They’re your problem. Put them to work. Feed them from your share. I don’t want to see them. I don’t want anything to do with them.” She turned and stalked off down the hall.