Fun To Come! (and come and come)

First, a brief update on stuff coming up.  I have one more part to go with Cinders, which should be here by the 16th.  I took another LiAW (Goodreads Love is Always Right in the m/m romance group) story prompt, due at the beginning of July.  Have a look. 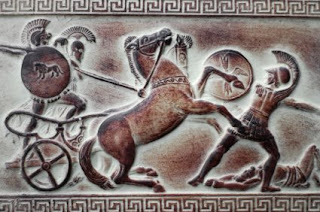 Another day, another kick in the ass by that stupid horse. You would think that after all these thousands of years I'd be okay with imprint of a horseshoe on my backside but I have to tell you it's getting old. If I had it to do over, I think I might reconsider telling my king's mage she was so grotesque she could freeze a man (and apparently a horse and chariot) in stone.

Clearly the prompt giver is going for humor.  I'm thinking I'll title the story Frieze Frame.  We'll see what erupts from my brain by the end of the month.

Also, I sold a short story to Dreamspinner Press for their anthology Animal Magnetism, titled Having a Ball.  Yes, pun so totally intended, I know, where is my class?  I used it all up on In All Your Ways.  Now the crass is taking over.  The "Ball" in the story refers most directly to a ball python.  I'll post a snippet (unedited, remember, so not perfect) after my next bit of news.

Which is that my dad, who usually lives in Germany, is going to be able to visit me on my 30th birthday next week inbetween a trip to Oregon and a conference in DC.  Crazy life for that man, but I'm happy!  Also kind of bummed, because now I can't get hilariously hammered and innapropriate on my birthday, but at least I'll get a really awesome meal and the company of my dad, who is pretty goddamn cool.

Okay, so!  Snippet from Having a Ball.


I was dead on my feet when I got back to Michael’s apartment the next morning.  Whoever thought spray-painted, metal-limbed, light-festooned reindeer was a good decorating choice needed to be shot, repeatedly.  Or at least made to unpack the damn things with me for twelve hours, because I don’t care how fucking decorative they are, one wrong move and you’ve got an antler impaling your arm and a hoof up your nose, and you’re doing everything you can not to drop one of the things because the store policy is you break it, you buy it.  I would burn in hell before I let a five-hundred dollar deer get deducted from my paycheck.


I flopped in the chair next to Ganymede’s cage.  He looked exactly as he’d looked for the past day, like a little ball that moved from one side of the cage to the other depending on whether he was in heating or cooling mode.  I didn’t get the appeal of a snake as a pet.  They weren’t cuddly, they couldn’t play with you, they didn’t purr or bark or play fetch…on the other hand, they wouldn’t be chewing up your shoes or pissing on your bed either, and Michael was kind of a fastidious guy.  He had probably encouraged Kelly to get a nice, clean pet that wouldn’t be a bother, and she had settled on a snake, thanks to…whatever his name was upstairs.


Michael’s instructions belatedly filtered into my mind.  “Oh yeah.  Food.”  Ugh, food.  I had taken a baggie of the pinkies out of the fridge last night and let them defrost, because I knew that putting them in the microwave would just be asking for a mess that gave me nightmares.  They dead mice were waiting where I left them in the kitchen, all gross and semi soggy now.  At least I had already gotten my own food down, because after this process it would have been unlikely.


Apparently there were feeding forceps around here somewhere, but I didn’t see them on the counter or next to the cage, and there was no way I was going to reach in there with my fingers or a fork or something and scoop the pinkies out.  I picked up the damp baggie and brought it over to the cage, removed the top and slowly tipped and shook, hoping that one of the fresh frozen little buggers would cooperate and fall out without much manhandling.


Obediently, one fell into the cage, but I wasn’t fast enough with the baggie and another made its break for freedom before I could tip it right side up.  Two little pinkies rested on the bottom of the cage, and the snake was actually moving now, looking pretty interested in the new arrivals.  I stared down at the tableau, artificial nature in all its Darwinian glory, and shrugged.  “Looks like it’s your lucky day, G.”  The pinkies were tiny, after all.  What could a little extra protein hurt?  I resealed the baggie and put it back in the freezer, washed my hands and retreated to the chintzy bedroom for a solid six hours of sleep.

Email ThisBlogThis!Share to TwitterShare to FacebookShare to Pinterest
Labels: Having a Ball, LiAW event, snippet