Not that close, but still, Boulder now gets its own fire.  In fact, the county has two!  Not close to me, I'm down in the town and not in the mountains yet, but the facility my husband works at is right on the other side of the mountain.  He's waiting to see whether they'll have to evac, and whether to take the hydrogen bottles that comprise a part of their experiments with them when they go.  Hydrogen: a fire that burns so hot its invisible.  Not the sort of thing you want compounding a forest fire. 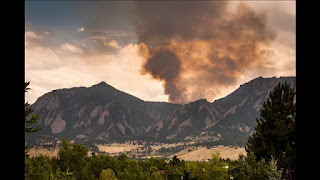 Odds are this won't amount to much because there are already so many fires burning here that our response teams are amazing right now.  Still, this is a record-setting year for heat, drought and fires in Colorado.  We're winning at all the wrong things.

In other news...well, hell, there isn't much.  I'm moving, packing, prepping for a trip to Florence OR, and scrounging for time to write anything.  I'll try to get the first part of the new Pandora escapade to you before I leave on Monday, but no promises, guys.  It's not that I don't want to, it's that I don't want to give you second-rate fic for the sake of expediency.  I love you that much:)

Okay, a little other news.  I have a story coming out in the Total E-Bound anthology Oberon's Court in December, which is awesome!  Changing Worlds got 4.5 stars from Booked Up Reviews here: Booked Up Reviews: Changing Worlds.  I'm going to submit my second Love is Always Write story to goodreads soon, out sometime in July.  It's not that things are bad.  They're just a bit frantic.

Anyway!  Take care, dahlings.  Stay out of the mountains.
Posted by Cari Z at 3:10 PM