Because I couldn't resist...

This evening's entertainment was the period drama (snicker) Abraham Lincoln, Vampire Hunter.  It automatically wins for best title ever slapped on a piece of historical paranormal fiction, ever! 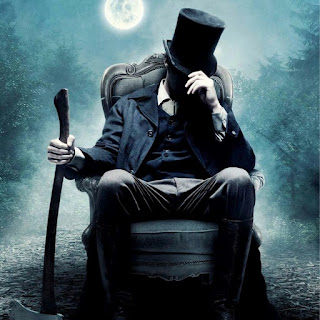 That being said, the movie didn't really live up to the awesomeness of the title.  There was some backstory, yes, the tragic tale of the loss of Abe's mother to a vampire's bite, revenge overtaking reason, the inevitable and ridiculously fast training period for the up and coming young slayer.  It's amazing how quick some people take to swinging axes in circles and chopping down trees with one blow.  I thought he'd be squeezing water from stones next, maybe.

Honestly, I thought the good guys were pretty well developed, and I loved the backdrop of the Civil War as a setting for vampire vs human conflict.  I feel compelled to go and read the book now, I know I'll enjoy it (I liked Pride and Prejudice and Zombies, but then, who didn't?).  But I felt the villains were rote, and there was just too much gratuitous action (the horse scene, mother of God, are you serious?  Really?  You couldn't come up with anything better than that?  Really?).  Which is a weird thing to say, as I love action movies, but you can't expect me to get emotionally caught up in an epic story of good vs evil if the poignant themes are subsumed by heaping helpings of blood and gore.    I had the same problem with Snow White and the Huntsman; it asked me to care without really giving me a reason to.  And then there was the whole Kristen Stewart thing compounding that movie's issues, which...well, whatever.

Anyway, yes, there is fun to be had with this film.  If you love vampire movies, then this addition to the genre isn't to be missed.