Notes: Back to Johnny! Who has figured out another way to spend time with Charlie, not that he's deliberately trying, not at all...next time, we get some Charlie at school POV. Because it's time to get back to the kiddos. 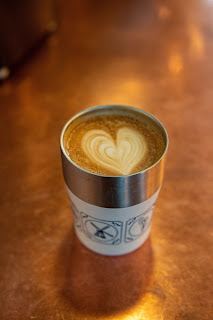 It occurred to Johnny, once he was five minutes from Charlie’s apartment and taking another pull of coffee from his travel mug to wash the last lingering muffin crumbs out of his mouth, that he probably should have brought some coffee for Charlie. That would be the polite thing to do, wouldn’t it? He was picking the guy up at “too-early-in-the-morning” o’ clock, the least he could do was not be an asshole about it by drinking coffee in front of him. He could have brought him a muffin, too. Johnny had way too many, and seriously, Lora’s daughter needed to stop giving her zucchini, because even mixed with chocolate and baked into a delicious treat, it was starting to be excessive.

Johnny stared at his coffee mug. It was, oh, half full? And he had three minutes left on his arrival clock now? “You can get it down,” he told himself, and began to chug.

Bad idea, bad idea. The insulated mug kept the coffee so hot that trying to take anything other than a tiny sip resulted in burning the roof of his mouth, then his tongue. He swallowed to stop from spitting it all over the steering wheel, and regretted the decision as the liquid burned a path down his throat and into his belly. Johnny coughed and coughed, almost unable to watch the road because his eyes were blurring with tears. You are an IDIOT. He searched his mind for a knack that would help with idiocy, or conversely, physical discomfort, and came up empty. Great.

The burn had faded a bit by the time he got to Charlie’s apartment building. Which number was his again? It was going to be an awkward fucking morning if Johnny had to get out and start knocking on doors before the sun was up…but wait, no, there was Charlie, materializing from out of the shadows like some sort of wraith. There had been a kid at Stheno in their year who had a wraith knack—shadow melding, the closest thing to invisibility anyone knew about yet, and an ability that the army doctors would absolutely love for Johnny to be able to copy. He hadn’t managed it yet. Was it because he genuinely couldn’t, or because he knew subconsciously that, if he did, he’d never be a simple school counselor again?

Maybe a little bit of both. Either way, he needed to pick up his shadowy passenger. Johnny pulled the car in by the curb, reached over, and unlocked the door. Charlie got in and settled down with a sigh, placing his briefcase between his feet. He had two travel mugs of coffee, one balanced on top of the other, in his right hand. “You look like you’re probably good, but just in case,” he said, and set one of them in the free cupholder space before taking a long sip from his own.

He sounded…tired. “Rough night?” Johnny asked as he pulled back onto the road. The traffic was still pretty light—they’d make it to Euryale with plenty of time to spare. And then he could make his excuses to Principal Cochrane and head for the courthouse. Awesome.

“No rougher than usual.”

Johnny scoffed. “Dude, please. You were in a car accident yesterday, that has to have made whatever your normal sleep is like worse.”

“You don’t know what my normal sleep is like.”

I wouldn’t mind finding out. Johnny said a quick prayer of thanks for the fact that Charlie didn’t have a mental knack, then refocused. “Is it the kind that can be improved by blunt force trauma and whiplash?”

Neither of them spoke for a few minutes, and Johnny wondered if that was going to be it for the whole ride when Charlie said, “Too much stuff whirling around in my head for me to sleep. I mean, the concussion doesn’t help, but I get nights like this sometimes, when my brain is stuck in a loop and I can’t seem to get out of it.”

“That sucks.” Johnny had experienced something like that a few times, but he’d always been able to “jerk” himself out of it, so to speak. Generally, and thankfully, he slept pretty well. “What were you thinking about?”

“Shit, what wasn’t I thinking about?” Charlie laid his head back against the headrest and closed his eyes. Johnny took advantage of the moment to look at him. Even as haggard as he seemed right now, with the bruises and dark circles and the fucking stitches, he was still unfairly handsome. “I was thinking about the inconvenience I was going to put you through in the mornings, thinking about how I’m going to have to save up for a car or try to get a loan—and I have a shit credit rating, thanks to being overseas for so long and never having to buy anything—thinking about what the fuck I’m going to do about PT and getting home in time to talk to Ari and his mom…that sort of thing.”

That was…a lot. Johnny hadn’t even considered extracurriculars or things like that, for either of them, when he came up with his brilliant rideshare scheme, but he should have. Not that Johnny had any regular entertainments or appointments, but he had plenty of irregular ones come up. This morning being a case in point.

Maybe this was a bad idea. Maybe you should just make it a one-day thing. Or one week. But Johnny already knew he couldn’t do that. This was his fault, and besides that, it seemed like what Charlie needed even more than a ride was someone to spend time with who wasn’t a student or physical therapist or…whoever Ari and his mom were. “I can take you,” his mouth said without his express permission.

Charlie almost jolted upright—damn, had he been about to fall asleep? Johnny should have kept his mouth shut. “What? No, that’s—that’s too much, you’re doing too much already.”

“Are you kidding me? You’re going to need PT now more than ever—” maybe a little less hyperbole, all things considered, genius “—and it wouldn’t inconvenience me.”

“Oh yeah?” Charlie challenged. “Sitting around in a waiting room for an hour three days a week won’t inconvenience you?”

Johnny shrugged. “I can use the time to make phone calls and do paperwork. I’d be doing the same exact thing at home, except surrounded by muffins. Waaay too many muffins.”

Charlie’s eyes narrowed. “I can’t tell if you’re trying to be funny or just being weird.”

“The muffins are a real thing, and also a funny thing, and weird…” Johnny shrugged. “I am who I am, I guess. Weird is definitely a part of that. If you really don’t want the help, I won’t force it on you, but I’m offering. My hours can get really fucking weird sometimes, though,” he warned. “So it’s going to be you waiting on me in all likelihood at least half the time.”

“I can handle that.” Charlie sounded almost surprised, like it was a confession that had just slipped out. “Um. Are you sure?”

As sure as I can be without hitting myself with the ol’ Willpower knack. “Yeah. I’m sure.” Johnny reached down and took a sip of his coffee. It was comfortably warm now, he’d be done with it by the time they got to school.

And he had his second cup already waiting for him.

Johnny smiled, just a little bit. Funny how a potentially huge disruption in his schedule could feel like winning something. “You’re welcome.”