The Tank: Chapter Seventeen, Part Two, aka THE END!!!

Notes: THE END! IT'S THE END! THE END OF THE TANK, HOLY CRAP! And it's not as perfectly HFN/HEA as I usually go, because I think I need one more story in this world to round it all out. However! It's still hopeful, and will hopefully satisfy you :)

What comes next? Honestly, for the rest of this month it will probably be vignettes and excerpts as I take some time for massive edits on the book I've contracted with Entangled, coming out in 2021. After that...I don't know yet! Something very different. We'll all find out in June :)

Thanks for sticking with me, darlins! I love you and appreciate you coming to read my blog stories. 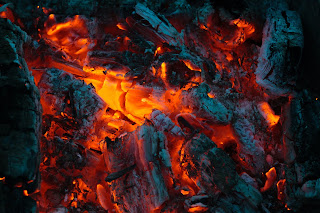 The room was dark, only barely illuminated by the remains of the fire in the grate. It was intimate, which fit the mood, but not a warm, tender intimacy like Camille had just shared with Anton. This was an intimacy forged from blood and duty, and despite the bond that flowed between him and his half-brother, Camille felt cold within it.

“You have your instructions?”

“Good.” His brother swirled the brandy in his rounded glass moodily before taking a sip. “We need a to make an example of the Dévoué, preferably one that will serve to inspire our own aristocracy back into line as well. I need a list of suitable targets within two months, at least ten, no more than twenty.”

He sighed in a long-suffering manner. “You needn’t be so petulant about it.”

“Petulant, Laurent?” Camille half wished he had his own glass of brandy at the moment, so he could have the satisfaction of throwing it into his brother’s face. “I’m not petulant.”

Laurent scoffed. “I see it in every line of your face, every movement of your body. Don’t blame me for your lover’s inability to choose his friends wisely, Camille.”

“I don’t blame you for that,” Camille said, making an effort to keep his voice even. “I certainly do blame you for putting him into a position where he had to give up both his freedom and his research to further a cause he has next to nothing to do with, though.”

“He did so voluntarily.”

“Because you threatened to kill a woman he loves like a sister as a spy!”

“She was a spy,” Laurent said simply. “Letting her go without some sort of punishment or appropriate governmental exchange would weaken my position in court, which is something neither of us can afford. Proulx wasn’t the only man in a position of power with doubts about the monarchy, and you and I are both very vulnerable to the vicissitudes of life in Paris, brother. You know I had no choice.”

“You had to act,” Camille agreed reluctantly. “But you didn’t have to force his hand.”

“I didn’t even know he had anything to offer,” Laurent pointed out. “But I’m grateful for all of us that he did. If this works, Camille, we will buy peace for the entirety of the French Empire for years with it. Tell me you see that.”

“I see it.” But you will buy it at the cost of Anton’s heart and soul. Nothing he could say would dissuade his brother once he had the bit between his teeth, though. “I will go now.” He stood up and pulled on his cloak.

Laurent stood up as well. “I need regular messages, weekly if you can manage it.”

Two months… It was barely enough time to do what Laurent wanted from him, and far too much time to be separated from Anton. Camille’s heart yearned to rejoin him, to kiss him awake and fill him with pleasure. He was the first thing that Camille had ever wanted for himself, with no regard to family or duty, and the only thing he’d wanted to keep separate from those heavy responsibilities. Now they were inextricable, and he felt sick with the weight of that knowledge.

Laurent touched his arm with one chill hand. “I will ensure he’s taken care of,” he assured Camille. “No harm will come to Mr. Seiber while he remains with us. You have my word.”

Camille knew it was the best his brother could do. “Thank you.” After a moment’s wavering, he leaned in and embraced the other man. Laurent seemed startled, but clasped him back for a moment.

“Carry on then, Lord Lumière,” he said once they were parted.

“As you bid, Lord Jourdain.” Camille put on his tall hat and nodded, then left his brother’s cozy study and headed along the cold, empty corridor to the front of the Institute, where a carriage was waiting for him. He didn’t stop to take one last look at Anton. He couldn’t—he couldn’t bear to leave him again.

He stepped into the cold pre-dawn air, handed his valise over to the footman waiting for him, and got into the simple black coach. It rattled as it set off down the road for Paris, and the train that would take him north.

Camille closed his eyes, bit his lip, and tried not to think of Anton.

Be well. May God and my brother keep you safe until we see each other once more.

For if they did not…Camille would burn the world down.
Posted by Cari Z at 11:46 AM