Omigosh, I have a cover to show you and everything!

Risky Behavior is the first of a planned trilogy that I'm writing with L.A. Witt (we're actually 20k into the third book right now, so when I say I'm writing it, I mean we're fucking writing it, light speed). It's a romantic suspense novel, heavy on the suspense. Look at it. Look! I'm adding a link, in case you want to read more about it or, y'know, pre-order. ;) 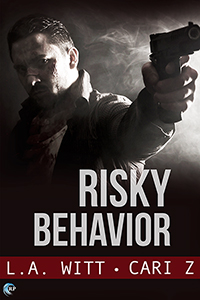 It’s day one of Darren Corliss’s career as a detective, and not only has he been assigned a notoriously difficult partner, but the guy might also be a pill-popping dirty cop. Internal Affairs needs proof, and Darren gets to be their eyes and ears whether he wants to or not.
Detective Andreas Ruffner doesn’t play by the rules, and he doesn’t play well with others. With bodies piling up and a list of suspects who are way above his pay grade, the last thing he needs is a wet-behind-the-ears kid for a partner. Or babysitter. Not even if that partner is easy on the eyes.
As Darren gains Andreas’s hard-won trust, they both realize there’s more than just mutual suspicion simmering beneath the surface. But their investigation is heating up as quickly as their relationship, and Darren has no choice but to go along with Andreas’s unorthodox—and borderline unethical—methods. As IA puts the squeeze on Darren to give up the man he’s falling for, he has to wonder—is Andreas the only cop left in this town who isn’t dirty?
Posted by Cari Z at 7:31 PM