There are occasional moments in my real life that are so strikingly odd, I just feel the need to share them.

Soooo...any South Park fans out there?

If there are, then you've probably seen the episode where they go to Casa Bonita in Denver for Cartman's birthday.  Casa Bonita, land of cliff divers and roaming mariachi bands and Black Bart's Cave!  Designated by numerous travel magazines as one of the top roadside attractions in the US.  How could anyone not want to have that experience? 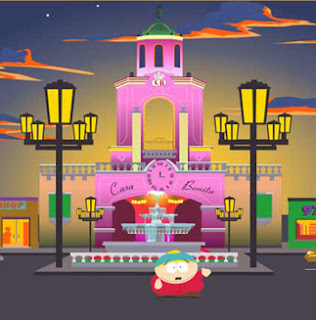 Actually, the place is so incredibly kitschy that there is an undeniable element of fun to it.  There are cliff divers, there was a fire juggler (a kind of lame one, but whatever, I can't do that), there were live shows that happily fed the lowest common denominator of humor (we're talking stuff the scads of kids there needed to be able to understand, and they did, so success!) and there were all kinds of other minor attractions, from a caricature artist to an old Frogger game to safety-minded pinata breaking.

If you have small children, they will absolutely enjoy themselves at the Casa.  If you want a unique experience in a place made-up to imitate a sprawling Mexican villa/village, then you'll get a kick out of it too.  If you want to pay a truly ridiculous amount for what is some of the worst food I have ever eaten in an American restaurant, then by God, it's worth it! 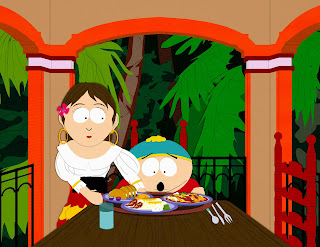 Feel free to share if you've eaten someplace that rivals this icon of awesomeness.  I just like knowing these things...
Posted by Cari Z at 11:50 AM